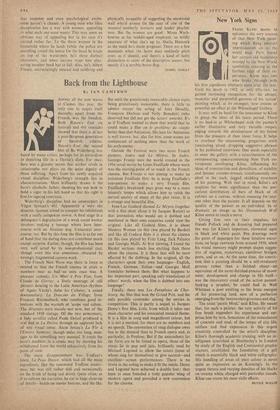 FRANZ KLINE 'seems to epitomise the very essence of that New York paint- ing which flung abstract expressionism on to the world map. Paris found her century-old leadership I wrested by the New World

symbolists creating at the farthest edge of their ex- perience. Kline was one who broke through with his first significant abstracts soon after the war. Until his death in 1962, at only fifty-two, he gained increasing recognition for the abrupt, muscular and purposeful gestures of his 'action' painting which, at its strongest, now creates so powerful an effect at the Whitechapel Gallery.

It may well be hard for the newcomer to Kline to grasp the ideas of his latest period. There is no lead-in at Whitechapel with the painter's earlier illustrative and very variable output, edging towards the development of his forms from the pressure of their inner force. It helps to overhear the unassuming, gregarious artist ruminating aloud, dropping suggestive phrases in his published interviews. One needs especially to enter the gallery with a consciousness of the overpowering, space-consuming New York en- vironment enveloping Kline, influencing his ideas of construction and demolition, of stability and fiercest counter-stresses, simultaneously im- plied in the stark, jagged, skidding structures of his painting. With that in mind. Kline's art acquires far more significance than the pre- carious distribution of bars of black or of colours on a canvas, without meaning forany- one other than the painter. It all depends on the quality of the painter as an individual. In so dramatic an image as his Shenandoah Wall Kline seems to touch a nerve.

Giving free rein to their impulses, his friends Pollock and de Kooning had prepared the way for Kline's imperious, elemental signs in black and white paint. Pen drawings were his point of departure for these intuitive excur- sions on large canvases from around 1950, when his visual memory might prompt shapes sugges- tive of engines, motorways, cantilever bridges, ports, and so on. At the same time, the convic- tion that a painting should be a self-revelatory process rather than a finished object—an equivalent of the never-finished.process of move- ment, development and change in life itself— was the innovatory creed of the action painter. Seeking a prophet, he could find in Walt Whitman a poet exulting in the brute energies of his pioneering land, sure of a perfection emerging from the 'measureless grossness and slag.'

The artist 'paints blind,' said Kline. He meant that, for such a painter, the very activity of his free brush engenders his experience and sur- prises him by turn. Sensations of the musculature of concrete and steel, of the tempo of city life, surface and find expression in this urgent creativity controlled by the artist's discipline. Kline's thorough academic training, with an in- telligence nourished at Heatherley's in London by study of the English and Continental graphic masters, established the foundation of a gift which is essentially black and white calligraphy. His handling of areas of pure colour is never quite so expressive as de Kooning's. In the urgent thrusts and varying densities of his blacks on creamy white, charged with particular moods, Kline can create his most virile effects.