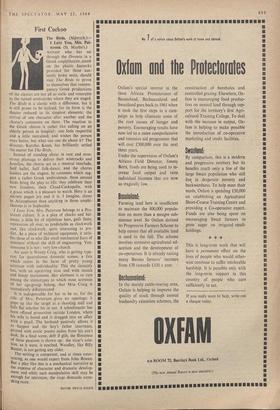 The Birds. (Aldwych.)— I Love You, Mrs. Pat- terson. (St. Martin's.) ANYONE who has sat through the Oresteia in a Greek amphitheatre,,numb on the plastic hassocks provided for those aus- terely hewn seats, should visit The Birds to prove to themselves that contem- porary Greek productions of the classics are not all as static and venerable as the ruined semi-circles where they are staged. The Birds is a classic with a difference, but it is still prone to be stylised, for its form is the theatre reduced to its simplest elements; the arrival of one character after another and the chorus's comments on them. The reaction to the Greek chorus is rather like calling on an elderly person in hospital: one feels respectful and a little restrained, and wishes the person were better, but what can one do about it? The director, Karalus Koun, has brilliantly settled the matter for The Birds.

Instead of standing about in vast and mon- strous plumage to deliver their wisecracks and homilies, the chorus act as a •musical interlude, half ballet, half folk-dance, and the chorus leaders are the singers. In costumes which sug- gest a rather Greek ambivalence, these sensual birds bring the play to life; they celebrate their new freedom, their Cloud-Cuckopolis, with a grace which is a pleasure to watch. Here is an ancient pagan joy and it is I imagine, closer to Aristophanes than anything in those amphi- theatres is to Sophocles.

1 Love You, Mrs. Patterson belongs to a Pro- testant culture. It is a play of checks and bal- ances, a little bit of inhibition here, guilt there, repressions• all over, as predictable as clockwork and, like clockwork, quite interesting to pre- dict. As a• piece of technical equipment, it satis- fies those of us who like small mechanical feats of structure without the skill of engineering. Ven- turesome it is not : very low-church.

An asset is Wendy Craig, who is getting type- cast for quarrelsome domestic scenes, a fate which stares in the faces of pretty young actresses with individuality. This she Certainly has, with an upcurving nose and wide mouth and bendy movements. Her alertness is so rare among the stereotypes to which most actresses of her age-group belong, that Miss Craig is immediately differentiated.

It is indispensable for her to be so, for the role of Mrs. Patterson gives no openings; it PHDPs up like the target at a shooting stall and

falls flat whether hit or not. A schoolmaster has been offered promotion outside London, where

his wife is bored and is dragged into an affair with a pupil. The husband passively allows it to happen and the boy's father intervenes, primed with erotic poems stolen from his son's desk. In a final scene, deft if glib, the flimsiness Of these passions is shown up: the vicar's solu- tion, as it were, is reached. Woodley, like Billy Bunter, is not getting any older. The writing is competent, and at times enter- taining, as one would expect from John Bowen. But a play like this is a mechanical narrative at the expense of character and dramatic develop- ment and while such manipulative skill may be enough for television, the stage demands some- thing more.