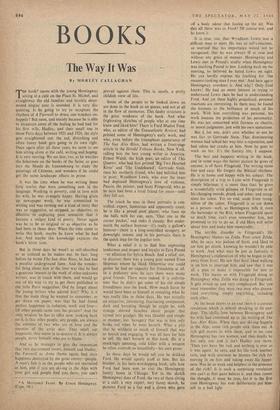 The Way It Was

rrHE book" opens with the young Hemingway I sitting at a café on the Place St. Michel, and straightway the old familiar and terribly deter- mined elegiac note is sounded. It is very dis- quieting. Is he going to try to recapture the rhythms of A Farewell to Arms, one wonders un- happily? But soon, and mainly because he is able to recapture some of the feeling he had had for his first wife, Hadley, and their small son in those Paris days between 1921 and 1926, the style gets straightened out; the sad, disturbing and often funny book gets going in its own right. Once again after all these years we seem to see him sitting alone at the café, writing and hoping. It is very moving. We see him, too, as he watches the fishermen on the banks of the Seine, or goes into the Musee du Luxembourg to study the paintings of Cezanne, and wonders if he could get the same landscape effects in prose.

It was the time when he was writing those little stories that were something new in the language. Working in poverty, and in love with his wife, he was strangely happy. Having given up newspaper work, he was committed to writing and was turning out a kind of story that was so suggestive, so stripped, so objective, so effective in capturing pure sensation that it became a unique kind of poetry. Never again was he to be as original or as objective as he had been in those days. When the time came to write this book, maybe he knew what he had lost. And maybe this knowledge explains the book's bitter tone.

But in those days he wasn't as self-absorbed or as isolated as he makes out. In fact, long before he wrote The Sun. Also Rises, he had had a peculiar underground fame. And the wonder- ful thing about him at the time was that he had a generous interest in the work of other unknown writers, was in touch with them, and would go out of his way to try to get them published in the little Paris magazines. Did he forget about the young writers who adored him? Why is it that the main thing he wanted to remember, or get down on paper, was that he had found perfect happiness in isolation, work and love— till other people came into the picture? And the only wisdom he has to offer now, looking back on it, is that other people, any people, are always the enemies of two who are in love and the enemies of the artist also. They smell out happiness, they move in to destroy it. It is always people, never himself, who are to blame.

And so he manages to give the impression that two star-crossed lovers, himself and Hadley, the Farewell to Arms theme again, had their happiness destroyed by the great enemy—people. A man's fate is in the people who are interested in him, and if you are ski-ing in the Alps with your girl and people find you there, you can't * A MOVEABLE FEAST. By Ernest Hemingway. (Cape, 18s.)

prevail against them. This is, surely, a pretty childish view of life.

Some of the people to be looked down on are done in the book as set pieces, and not at all in the flow of memories. This faulty structure is the great weakness of the book. And what frightening sketches of people who at one time knew and liked him! There is Ford Madox Ford, who, as editor of the Transatlantic Review, had printed some of Hemingway's early work, and who, even before the triumphant appearance of The Sun Also Rises, had written a front-page article in the Herald Tribune Books, New York, calling him the best young writer in America; Ernest Walsh, the Irish poet, an editor of This Quarter, who had first printed `Big Two Hearted River' and The Undefeated'; Gertrude Stein, once his motherly friend, who had belittled him in print; Wyndham Lewis, who over the years had deplored Hemingway's love of violence; Pascin, the painter, and Scott Fitzgerald, who as he says had been a loyal friend for years—until they fell out.

The touch he uses in these portraits is con- trolled, expert, humorous and apparently exact; he is like a proud pool player, who lines up the balls with his cue, says, `That one in the corner pocket,' and sinks it cleanly. But under- neath the surface humour—it's really a gallow's humour—there is a long-nourished savagery, or downright venom, and in his portraits there is the quick leap for the jugular vein.

What a relief it is to find him expressing tenderness and respect and loyalty to Ezra Pound —or affection for Sylvia Beach. And a relief, too, to discover there was a young poet named Evan Shipman whom he liked. Otherwise one could gather he had no capacity for friendship at all. In a prefatory note he says there were many good friends. There were indeed. It is unfortu- nate that he didn't get some of his old simple friendliness into the book. How much fairer he would have been to himself in revealing what he was really like in those days. He was actually an attractive, interesting, fascinating companion, dark and brooding though he might be, with strange shrewd hunches about people that turned into grudges. He was likeable and simple in manner, too. Savagery that was in him only broke out when he went berserk. What a pity that he withheld so much of himself that was so boyish and engaging. It was all here for him to tell. He isn't berserk in this book. He is a mockingly amusing, cold killer with a weapon he often controls so beautifully—his own prose.

In• those days he would tell you he diiliked Ford. He would openly scoff at him. But his brother, in his hero-worshipping book, tells how Ford had been sent to visit the Hemingway family home in Chicago. Yet in the sketch Hemingway does of Ford, the two of them sitting at a café, a very expert, very funny sketch, he pictures Ford as a liar and a clown who gave off a body odour that fouled up the air. Was this all there was to Ford? Of• course not, and he knew it.

It is true, too, that Wyndham Lewis was a difficult man to meet. He was so self-conscious, so worried that his importance would not be recognised, that he was always ill at ease and without any grace of manner. Hemingway and Lewis met in Pound's studio when Hemingway was teaching Pound to box. Looking back on the meeting, he believed he hated Lewis on sight. He can hardly express his loathing for 'the meanest-looking man I ever met.' And here again Hemingway overdoes it. And why? Only God knows! He had no more interest in trying to understand Lewis than he had in understanding Ford. And yet these highly prejudiced, personal reactions are interesting. In them may be found the keynote to the brilliance of much of his work. With him everything was personal, his work became the projection of his personality. He was not concerned with fairness or charity, or moral judgments, just with his own sensations.

But 1, for one, don't care whether or not he was fair to Gertrude Stein. That domineering woman had talked her way into a reputation, and had taken her cracks at him. Now he goes to work on her. It's the literary life, I suppose.

The best and happiest writing in the book, and in some ways the fairest picture he gives of anyone, is of Scott Fitzgerald. The writing turns free and easy. He forgets the Biblical rhythms. He is at home and happy with his subject. The description of a trip to Lyon with Fitzgerald is simply hilarious; it is more than that; he gives a wonderfully vivid glimpse of Fitzgerald in all his changing moods, drunk and sober, and recog- nises his talent. Yet on end, aside from recog- nition of the talent, Fitzgerald is so cut down as a person—well, as Hemingway tells it, even the bartender at the Ritz, where Fitzgerald spent so much time, can't even remember him, but promised to try to do so, if old Hem will write about him and make him memorable.

The terrible disorder in Fitzgerald's life Hemingway blames on Zelda. Poor crazy Zelda, who, he says, was jealous of Scott, and liked to see him get drunk, knowing he wouldn't be able to work. And what may be just as fantastic is Hemingway's explanation of why he began to shy away from Scott. He saw that Scott liked walking in on him to interrupt him, and saw that it was all a plan to make it impossible for him to work. This leaves us with Fitzgerald doing to Hemingway what Zelda was doing to Fitzgerald. It gets mixed up and very complicated. But you must remember they were two men who drama- tised everything, simply everything. including each other.

As the book draws to an end there is a curious revelation which is almost shocking in its can- dour. The idyllic love between Hemingway and his wife had continued up to the writing of The Sun Also Rises. When they are ski-ing happily in the Alps, some rich people seek them out. A rich girl moves in with them, and in no time Hemingway has two women, and then finally he has only one and it isn't Hadley any more. `Then you have the rich and nothing is ever as it was again,' he says, and his life took another turn, and with sourness he blames the rich for moving in on him and taking away his happi- ness. Was he so weak and helpless in the presence of the rich? It is such a surprising revelation one can't at first quite believe it, and then comes the thought, it must be true, for it is the first time Hemingway has ever deliberately put him- self in a bad light.