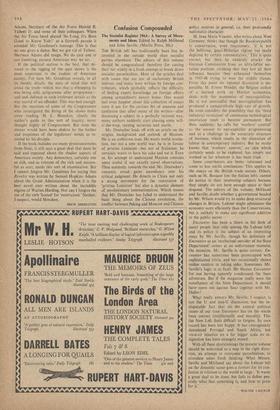 The SOcialist Register 1964: A Survey of Move- ments and Ideas. Edited by Ralph Miliband and John Saville. (Merlin Press, 30s.) THE British left has traditionally been less in- terested, in the outside world than socialist parties elsewhere. The editors of this volume should be congratulated therefore for casting their net widely in a fresh attempt to break down socialist parochialism. Most of the articles deal with issues that are not of exclusively British interest. and many were written by foreign con- tributors, which probably reflects the difficulty of finding expert knowledge on foreign affairs among sympathisers nearer home. One would feel even happier about this collection of essays were it not for the curious fits of amnesia and confusion that affect many of the writers—after discussing a subject in a perfectly rational way, many authors suddenly start chasing some will- o'-the-wisp, turning sectarian and sterile.

Mr. Deutscher leads off with an article on the origins, background and outlook of Maoism. He is an ambitious man. He wants world revolu- tion, but not a new world war; he is in favour of pristine Leninisin—but not of Stalinism; he certainly wants to have his cake and eat it. Even so, his attempt to understand Maoism contains some useful if not exactly novel observations. Then suddenly, towards the end, Mr. Deutsoher's romantic streak gains ascendancy over his critical judgment. He detects in China not only a strong movement for the • restoration of `pristine Leninism' but also a dynamic element of revolutionary internationalism. Which means that Mr. Deutscher has failed to understand the basic thing about the Chinese revolution, the conflict between Peking and Moscow and Chinese policy motives in general, i.e. their profoundly nationalist character.

M. Jean Marie Vincent, who writes about West Germany, thinks that though the Bundesrepublik is conservative, even reactionary, `it is not the bellicose, quasi-Hitlerian regime too easily depicted by certain commentators.' This is quite correct, but then he suddenly attacks the German Communists from an ultra-leftist sec- tarian position, claiming that they lost all their influence because they exhausted themselves in 1947-48 trying to woo the middle classes. From this point on, rational discussion is im- possible. M. Ernest Mandel, the Belgian author of a learned work on Marxist economics, deals with the economics of neo-capitalism. He is not unmindful that neo-capitalism has produced a comparatively high rate of growth. He even considers the possibility that the 'third industrial revolution' of continuous technological innovation tends to become permanent. But then, suddenly, he calls for 'workers' control" al the answer to neo-capitalist programming and as a challenge to the autocratic structure of business, which results in the alienation of labour in contemporary industry. But he surely knows that 'workers' control,' an idea which certainly needs to be explored, has simply not worked so far wherever it has been tried.

Some contributors are better informed and come to less sterile conclusions. This applies to the essays on the British trade unions. Others, such as M. Bosquet (on the Italian left), cannot do justice to their interesting subjects because they simply do not have enough space at their disposal. The editors of the volume, Miliband and Saville, doubt whether a government headed by Mr. Wilson would try to make deep structural changes in Britain. Labour might administer the economy more efficiently than the Conservatives, but is unlikely to make any significant addition to the public sector.

Encounter has been a thorn in the flesh of many people (not only among the Labour left) and its policy is the subject of an interesting essay by Mr. Saville, though his definition of Encounter as an 'intellectual outrider of the State Department' comes at an unfortunate moment. On occasion, Mr. Saville is quite correct; En- counter has sometimes been preoccupied with sophisticated trivia, and has occasionally shoWn undue caution in taking sides. Sometimes Mr. Saville's logic is at fault. He blames Encounter for not having squarely condemned the Suez adventure. But if the magazine really were the mouthpiece of the State Department, it should have' come out against Suez together with Mr. Dulles!

What really annoys Mr. Saville, I suspect, is not the U and non-U discussion, but the in- disputable fact that on the central political issues of our time Encounter has on the whole been correct (intellectually and morally). This the New Left finds difficult to forgive. Its own record has been less happy. It has courageously denounced Portugal and South Africa, but vis-a-vis injustice on a far bigger scale its in- dignation has been strangely muted.

With all these shortcomings the present volume should be welcomed as a step in the right direc- tion, a'n attempt to overcome parochialism, to stimulate some fresh thinking. What Messrs. Saville and Miliband say about the Labour left on the domestic scene goes a fortiori for its con- fusion in relation to the world at large: `It wants a great deal to be done, but fails to define pre- cisely what that something is, and how to press for it.'