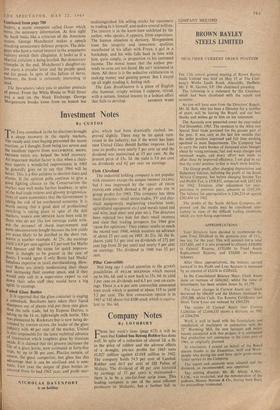 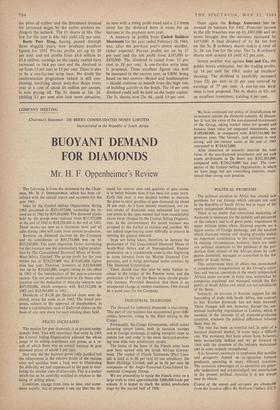 FROM last ■1/4 eek's issue (page 673) it will be seen that United Sua Betong Rubber has done well. In spite of a reduction of almost 2d. a lb. in the price of rubber and the adverse effects of a drought, pre-tax profits for 1963 were £1.027 million against £1.018 million in 1962. The company holds 54.3 per cent of Lambak Rubber and 46.5 per cent of Oil Palms of Malaya. The dividend of 40 per cent (covered by earnings' of 57 per cent) is maintained— there is to be a one-for-four scrip issue. This leading company is one of the most efficient producers in Malaysia, but a further fall in

the price of rubber and the threatened demand for increased wages by the native workers en- dangers the outlook. The £1 shares at 68s. (the low for the year is 64s. 9d.) yield 121 per cent.

Boots Pure Drug, having passed through three sluggish years, now produces excellent figures for 1963. Pre-tax profits are up by 20 per cent and net profits from £4,6 million to £5.4 million, earnings on the equity capital have increased to 34.4 per cent and the dividend is up from 13 per cent to 15 per cent. There is also to be a one-for-two scrip issue. No doubt the modernisation programme (which is still con- tinuing) involving about sixty-five shops every year at a cost of about £4 million per annum, is now paying off. The 5s. shares at 24s. 3d. yielding 3.1 per cent now look more attractive, as now with a rising profit trend and a 2.3 times cover for the dividend there- is room for an increase in the payment next year.

A recovery in profits from United Builders Merchants for the year ended February 28, 1964, was, after the previous year's severe weather, rather expected. Pre-tax profits are up by 37 per cent and the net profit from £347,000 to £476,000. The dividend is raised from 15 per cent to 18 per cent. A one-for-five scrip issue is proposed. These excellent figures can well be increased in the current year, as UBM, being based on two centres—Bristol and Southampton —should continue to benefit from the high rate of building activity in the South. The 18 per cent dividend could well be held on the larger capital. The 5s. shares, now 23s. 9d., yield 3.9 per cent.

Severe weather was against Inns and Co., the public works contractor, but the trading profits, up 14 per cent for 1963, make an excellent showing. The dividend is justifiably increased from 321 per cent to 35 per cent covered by earnings of 77 per cent. A one-for-one scrip issue is now proposed. The 4s. shares at 47s. are an excellent investment, yielding 4 per cent.