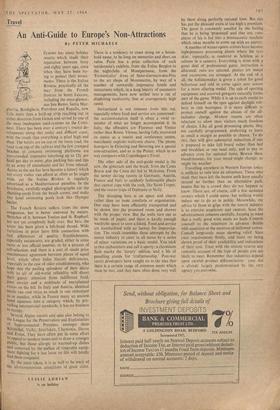 Etntom has many holiday resorts which made their reputation between forty and eighty years ago, since when they have been try- ing to protect their invest- ments. There is the Italian Riviera, practically all the way from the French frontier to Sestri Levante, including the once-glamor- ous San Remo, Santa Mar- ghcrita, Bordighcra, Portofino and Rapallo, now li:tle more than a built-up strip reaching out in either direction from Genoa and served by one of the most inadequate road-systems on the Conti- nent. There has been over a century's tourist de- velopment along this rocky and difficult coast, .with the result that everything is piled high and deep. The hotels are on top of the main road, the road is on top of the railway and the few cramped beaches or concrete swimming platforms are ,overcrowded, expensive (anything up to 12s. per head per day to enter, plus parking fees and tips 10 an army of attendants) and far from relaxed. Access to the sea has here become a luxury which not every visitor can afford as often as he might wish, yet 'the Italian Riviera is regularly advertised as a Mediterranean paradise. In the brochures, carefully-angled photographs cut the shunting-yards from the beach scenes, and make tiny hotel swimming pools look like Olympic basins.

The French Riviera suffers from the same congestion, but is better endowed by nature. Stretches of it, between Toulon and St. Raphael, are not yet completely built over. But here the screw has been given a left-hand thread. Wide variations in price have little connection with real differences of quality. Establishments, especially restaurants, are graded, either in some more or less official manner, or by a process of self-selection, and there is a sort of resale price maintenance agreement between places of equal level, which often hides blatant deficiencies, especially in the case of older establishments, who hope that the peeling splendour of their decor with its air of old-world reliability will divert their guests' attention from indifferent food, Poor service and a multitude of unexplained extras on the bill. In Italy and Austria, identical meals can cost twice as much in one restaurant as in another, while in France many an ancient hotel squeezes into a category which, by pre- vailing international standards, it has no business to occupy.

Several Alpine resorts and spas also belong to the League for the Preservation and Exploitation of Superannuated Premises, amongst them kitzbiihel, Vichy, Interlaken, Chamonix, Davos and Evian. They have often put in some effort to appeal to modern tastes and to draw a younger Public, but those allergic to warmed-up dishes and unmoved by the pathos of venerable equip- ment fighting for a last lease on life will hardly find them congenial.

BY the same token, it is as well to be wary of the all-too-notorious attractions of great cities. There is a tendency to coast along on a house- hold name, to be long on memories and short on value. Paris has a prize collection of such taxidermist's exhibits, from the Folies Bergere to the nightclubs of Montparnasse, from the 'Existentialist' dives of Saint-Germain-des-Pres to the art shops of Montmartre, by way of a number of outwardly impressive hotels and restaurants which, in a long, history of successive managements, have now settled into a rut of dispiriting mediocrity (but at courageously high rates).

Switzerland is not immune from this rot, especially where food and service are concerned : the accommodation itself is often a vivid re- minder of what no longer accompanies it. In Italy, the offenders are Florence and Venice rather than Rome. Vienna, having fully recovered its status as a tourist and conference centre, mercilessly exploits waltz-era charm. The phony heurigers in Grinzing and Sievering are a special non-attraction, and so is the Prater, which in no way compares with Copenhagen's Tivoli.

The other side of the anti-guide medal is the new, the gimcrack and the brash, from the Costa Brava and the Costa del Sol to Mykonos. From the newer ski-ing resorts in Germany, Austria, France and Italy to suddenly fashionable places that cannot cope with the rush, like Saint-Tropez, and the tourist traps of Dalmatia or Sicily.

The skimping here is on space and charm rather than on basic comforts or organisation. One may have been efficiently transported and be shown into the promised room and shower with the proper view. But the walls turn out to be made of paper, and there is hardly enough wardrobe space to stow a bikini. Food and service are standardised with no leeway for improvisa- tion. The result resembles those attempts by the motor industry to cater to all tastes by a series of minor variations on a basic model. You stick in .two carburettors and call it sporty; a chromium flash marks the 'luxury' edition, and a bit of panelling stands for 'craftsmanship.' Post-war resort developers have caught on to the idea that there is a certain range of common needs which must be met, and they have often done very well by them along perfectly rational lines. But this has put the pleasant extra at too high'a premium. The guest is constantly assailed by the feeling that he is being 'processed' and that any coin- plaint of his is fed into a bureaucratic machine Which takes months to come up with an answer.

A number of winter-sports centres have become high-pressure processing plants where the tyro skier, especially, is rendered as helpless as a salmon in a cannery. Everything is done with a great deal of professional gusto, instruction is allocated, runs are selected, picnics are issued and excursions are arranged. At the end of it all, the holidaymaker is given a token for good behaviour and told to come again next season for a more alluring medal. The sale of sporting equipment and assorted gewgaws naturally forms part of the game. While it is up to each tourist to defend himself on the spot against daylight rob- bery in chic boutiques, it is more difficult to protect oneself against the abuses of the all- inclusive charge. Modern resorts are often reluctant to allow their visitors much freedom of choice. Like all good processing plants, they are carefully programmed, preferring to leave as small a margin as possible to chance. To do this, they will give substantial reductions if one is prepared to take full board rather than bed and breakfast. or one meal only, and to pay in advance even for optional items. Beware these blandishments, for your mood might change; so might the weather.

Travelling anywhere in Western Europe today is unlikely to turn into an adventure. Those who think they have left the beaten path have usually strayed no further than an alternative path, beaten flat by a crowd they do not happen to know. There are, of course, still a few secluded corners which I could name, but nothing would induce me to do so in public. Meanwhile, my advice to those at grips with the tourist industry is to ekercise scepticism and caution. Scan the advertisement columns carefully, keeping in mind that a really good wine needs no bush. Commit yourself to the minimum in advance. Bristle with suspicion at the mention of hallowed names. Consult large-scale maps showing relief. State your requirements firmly, and insist on being shown proof of their availability and indications of their cost. Treat with the utmost reserve any romantic account of the type of people you are likely to meet. Remember that industries depend upon careful product differentiation : your slot is aliVady largely predetermined by the very agency you patronise.