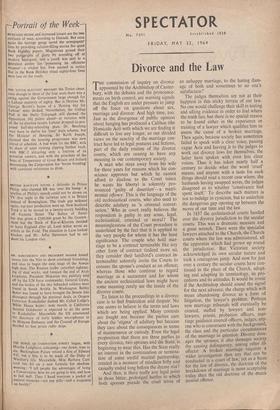 INCREASED MEANS and increased leisure are the two civilisers of man, according to Disraeli. But once again the teenage gangs saved the newspapers' lives by providing column-filling stories ficor quiet Bank Hqliday papers. Magistrates gained their two par graphs of glory by sounding off at modern hooligans, and a youth was sent to a detention centre for 'possessing an offensive weapon'—a cricket bat. Few seemed to notice that in the Bank Holiday ritual eighty-four lives were lost on the roads.

THE 'LITTLE ELECTION' BROUGHT the Tories cheer, even though in three of the four seats there was a swing against the Government large enough for a Labour majority of eighty. But in Devizes Mr. George Brown's hopes of a 'flaming day for Labour' were dashed. Nevertheless, the Gallup Poll in the Daily Telegraph still showed the Opposition 16/ points ahead—at variance with all the by-election results. Labour dropped its pro- posed half-day-schooling plan; Dr. Beeching may have to shelve his 'liner' traits scheme, but the Minister of Housing, Sir Keith Joseph, claimed that the housing programme was now ahead of schedule. A bad week for the BBC, with its share of total viewing slipping further back, with BBC-2 attracting only a fraction of its Potential viewers, and with the president of the Sons of Temperance of Great Britain and Ireland denouncing the Corporation for 'booze boosting' with continual references to drink.

BRITISH RAILWAYS FOUND a defender in Prince Philip, who claimed BR was 'over the hump.' A telefilm of Philip's speech could not be shown on TV that night as the railways sent it to Bristol instead of. Birmingham. The trade gap widened again, but beer production went up. New Scotland Yard is to be moved to a 'twenty-storey building off Victoria Street. The Sultan of Zanzi- bar was given a £100,000 grant by the Govern- ment but the Sheik of Ras-al-Khaima decided to leave England after all. Lord Attlee wrote an article in the Field. The situation in Laos looked blacker, and Mr. Adlai Stevenson had to cut short his London visit.

MR. KHRUSHCHEV AND PRESIDENT NASSER tossed stones into the Nile to show continual friendship, and also to begin the next stage of the Aswan high dam. The Russian leader cancelled sightsee- ing of steel works, and forecast the end of Arab kingdoms. President Makarios was publicly told off by the UN force commander, General Gyani, and the bodies of the two beheaded soldiers were found in South Arabia. In Washington Bobby Baker was found to have brought the Senate into disrespect through his persimal deals, in Oregon Governor Rockefeller dashed Mr. Cabot Lodge's White House hopes: next month in California Senator Goldwater is expected to do the same to Rockefeller.' Meanwhile the US announced the discovery of forty hidden microphones in its Moscow Embassy, and the Council of Europe decided to ban pirate radio ships.

THE PURGE OF CORONATION STREET began, with Martha Longhurst collapsing—one down, nine to die. Buckingham Palace vetoed a film of Edward VII, but a film is to be made of the Duke of Windsor's life. Meanwhile, Miss Barbara Cart- land has hit on a new formula for election- winning : 'I tell people the advantages of being a Conservative, how we are going to win, and how to feel well. Then I hand everyone a packet of natural vitamins—not pep pills—and a magazine on health!'