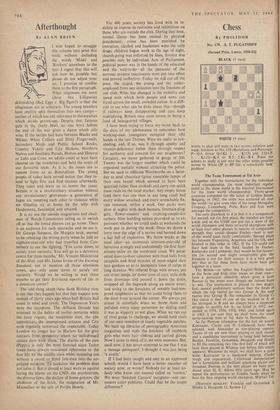 The Team Tournament at Tel Aviv Together with the tournaments for the individual world championship, the most important regular event in the chess world is the biennial tournament for the team world championship. Thirty-seven countries competed for the latter at Golden Sands, Bulgaria, in 1962; the entry was scattered all over the world—to give some idea of the range Mongolia, Uruguay, Luxemburg, Porto Rico and Iran were amongst the competitors.

The only drawback to it is that it is a competition for second, not for first place; the matches are four- a-side and as the USSR can put out a team of the world champion and three ex-world champions with at least four other players in reserve of comparable strength they could—despite Fischer—beat a rest- of-the world team fairly comfortably. Second place lies between Yugoslavia, Argentina and the US, who finished in this order in 1962. If the US could put their best team in the field, headed by Fischer, Reshevsky and Lombardy, they would be hot favour- ites for second and might conceivably give the Russians a run for their money; it is a very great pity that so far these three have never been got together in a team.

The British—or rather the English/Welsh team, as the Scots and Irish enter teams on their own— have a particular objective which gives a keen flavour to the event even though we cannot hope to win. The tournament is played in two stages; first, several preliminary sections then the finals in which the top twelve go into Group A, the next twelve into Group B, the remainder to Group C. Our status is that of one of the weakest in A or the strongest in B and we always have a desperate struggle to qualify for A; we failed in 1952, suc- ceeded in 1954, 1956, 1958, 1960, and failed again in 1962. I am sure that we shall have, the usual nerve-racking time at Tel Aviv in November. So far Penrose (champion for the last six years), Kottnauer, Clarke and N. Littlewood have been selected, with Alexander as non-playing captain. Teams of six are sent (four playing in each round) and a candidates tournament is being held between Barden, Franklin, Golombek, Haygarth and Hindle to fill the remaining two (the first half of which will have been played at Whitsun just before this article appears). Whatever its result, we shall have a good team. Kottnauer is a hardened veteran, Clarke tough and experienced, Littlewood inexperienced but a formidable and brilliant attacking player and Jonathan Penrose is the best player we have pro- duced since H. E. Atkins fifty yeati ago. May he repeat his performance at Golden Sands when he beat the then reigning world champion, Mikhail Tal.