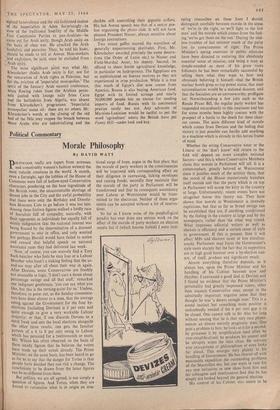 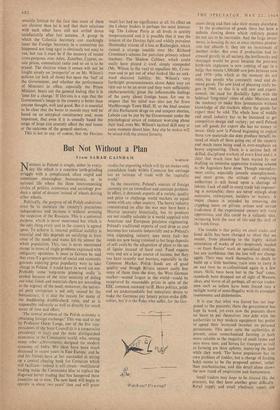 PoirriciANs really are (apart from actresses and conceivably women's fashion writers) the most volatile creatures in the world. A month, even a fortnight, ago the lobbies of the House of

Commons were full of hollow-eyed Conservative characters pondering on the base ingratitude of the British voter, the unaccountable shortage of decent jobs in the City and the awful probability that there were only the Birthday and Dissolu- tion Honours Lists to go before it was too late. Among these forlorn figures walked a lordly race of Socialists full of sympathy, naturally, with their opponents as individuals but equally full of manly indignation that the national interest was being flouted by the determination of a doomed government to stay in office, and only worried lest perhaps Harold would have failed to notice and reward that helpful speech on national assistance rates they had delivered last week.

Now, of course, you can scarcely find a Tory backbencher who feels he may lose or a Labour Member who hasn't a sinking feeling that the so- and-sos may after all cheat their way in again. After Devizes, some Conservatives are frankly not amenable to logic. 'I don't care a damn about percentage swings and all that stuff,' remarked one indignant gentleman, 'you can say what you like, but this is the turning-point for us.' Useless, therefore, to point out, as the Sunday commenta- tors have done almost to a man, that the average swing against the Government for the four by- elections (including Devizes) is 6 per cent and quite enough to give a very workable Labour majority; or that, if one discards Devizes as a rural freak and sets the local elections alongside the other three results, one gets the familiar pattern of a 6 to 8 per cent swing to Labour which has persisted for a twelvemonth or more. Mr. Wilson has often observed on the basis of these steady figures that he believes the voters have made up their minds already. The Prime Minister, on the same basis, has been heard to go as far as to say that the danger for Tories is that people have decided they can risk a change. The conclusions to be drawn from the latest figures can be no different from these.

But politics, we are all agreed, is not simply a question of figures. And Tories, when they are forced to rationalise what is in origin an irra- .. tional surge of hope, argue in the first place that the morale of party workers in the constituencies will be improved with corresponding effect on their diligence in canvassing, licking envelopes and raising funds; secondly they maintain that the morale of the party in Parliament will be transformed and that its consequent ascendancy over Labour at Westminster would be' trans- mitted to the electorate. Neither of these argu- ments can be accepted without a lot of reserva- tions.

So far as I know none of the psephotogical pundits has ever done any serious work on the effect of the morale of party workers on election results but if (which heaven forbid) I were insti- tuting researches on these lines I should distinguish carefully between morale in the sense of 'we're in the right, so we'll fight to the last man' and the morale which comes from the feel- ing 'we've got them on the run.' During the end- less troubles of last summer much of the party lost its consciousness of right The Prime Minister's spring exercises in public relations have been directed to restoring this absolutely essential sense of mission, and being a man as simple-minded as most of his grass roots followers he has been remarkably successful by telling them what they want to hear and obviously -believing it himself—that the British nuclear bomb gives us top power status, that steel nationalisation would be a national disaster, and that the Socialists are an untrustworthy, profligate lot. Notwithstanding a few jolts such as the Resale Prices Bill, the regular party worker has responded miraculously to this treatment and has for some months been highly content with the prospect of a battle to the death for these clear- cut causes. The quite different kind of morale which comes from Devizes and the feeling that victory is just possible can hardly add anything to a machine which is already in this heroic frame of mind.

Whether the erring Conservative voter or the Liberal or the 'don't know' will return to the fold will depend on more complex national factors—and this is where Conservative Members claim that morale in Parliament will tell. It is a commonplace, greatly beloved -at Westminster since it justifies much of the activity there, that the mood of the House mysteriously transfers itself outside and that the party which is on top in Parliament will scoop the kitty in the country at large. Unfortunately, recent events have not altogether borne this theory out. They have shown that morale at Westminster is intensely capricious, but that so far as broad swings can be established they are, if anything, conditioned by the feeling in the country at large and by the newspapers, rather than the other way round. What impresses editorial writers as well as electors is efficiency and a certain sense of style in government. If this is present, then it will affect MPs and electors more or less simultan- eously. Parliament may focus the Government's style more sharply but the fact that its supporters are in high good humour over a by-election can- not, of itself, produce any significant result.

Almost everything therefore depends, as it always has, upon the Prime Minister and his handling of his Cabinet between now and October. I canvassed a good deal at Devizes and I found no evidence that the Prime Minister's personality had greatly impressed voters, other than staunch Conservative ones, except in the admittedly important negative sense that they thought he was 'a decent enough man.' This is a sound instinct but something more positive is undoubtedly needed if the 6 per cent gap is to be closed. One cannot talk to Sir Alec for long without sensing that he is that very rare pheno- menon an almost entirely pragmatic man. One puts a problem to him; he looks at it for a second; he processes it by simplification (and often by over-simplification); he produces his answer and he abruptly wipes, the slate clean. He scarcely ever extrapolates or philosophises or even looks far ahead. This emerges very plainly in his handling of Government. He has cleared off with reasonable expedition the outstanding problems of the Macmillan era, but one waits in vain for any new initiatives or new ideas from him and his colleagues and interlocutors find that he has simply not looked beyond the general election. His control of his Cabinet also seems to be severely limited by the fact that most of them are cleverer than he is and that their relations with each other have still not settled down satisfactorily after last autumn. A group in which the Colonial Secretary can mockingly taunt the Foreign Secretary in a committee (as happened not long ago) is obviously not easy to run, but run it must be if the memory of recent cross-purposes over Aden, Zanzibar, Cyprus, re- sale prices, commercial radio and so on is to be erased. The election when it comes will not be fought simply on 'prosperity' or on Mr. Wilson's policies (or lack of them) but upon the 'feel' of the Government, and whether the performance of Ministers in office, especially the Prime Minister, bears out the general feeling that it is 'time for a change.' If Devizes is a sign that the Government's image in the country is better than anyone thought, well and good. But it is essential to be clear that the boost to morale may well be based on an untypical constituency and, more important, that even if it is soundly based the surge of hope can scarcely affect the real issues or the outcome of the general election.

This is not to say, of course, that the Devizes

result has had no significance at all. Its effect on the Labour leaders is perhaps the most interest- ing. The Labour Party at all levels is acutely temperamental and it is possible that it was the tension of the Devizes fight and widely prevalent Doomsday visions of a loss at Rutherglen, which caused a strange muddle over Mr. Richard Crossman's scheme for part-time primary school teachers. The Shadow Cabinet, which could easily have played it cool, simply stampeded (Mr. Wilson in the van) to repudiate Mr. Cross- man and to get out of what looked like an awk- ward electoral liability. Mr. Wilson's very forthright pronouncements about Aden may yet turn out to be an error and they were sufficiently uncharacteristic, given the inflammable feelings of the party about foreign bases, for one to suspect that his mind was also not far from Marlborough Town Hall. If, as the final session of this Parliament drags on and tempers shorten, Labour can be put by the Government under the psychological strain of constant worrying about their lead, even Mr. Wilson's tactical skill may at some moment desert him. Any slip he makes will be seized with the utmost ferocity.