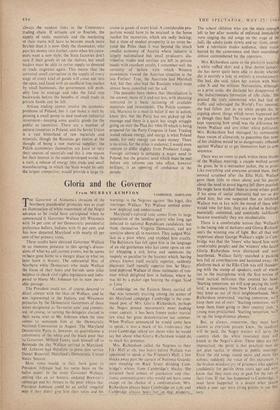 Gloria and the Governor

THE Governor of Alabama's invasion of the Northern presidential primaries was as cruel an illumination of white resentment of the Negro advance as he could have anticipated when he commenced it. Governor Wallace left Wisconsin with 34 per cent of her'Democratic presidential preference ballots, Indiana with 31 per cent, and has now departed Maryland with nearly 43 per cent of her primary votes.

These results have elevated Governor Wallace to an immense presence in this spring's discus- sions of what we call current events; but he seems to have gone home to a meagre place in what we later learn is history. The substantial bloc of Northern white 'Democrats who made Wallace the focus of their fears and hatreds seem alike helpless to check civil rights legislation and indis- posed to blame Mn Johnson for its now inevit- able passage.

The President could not, of course, descend to direct contest with the likes of Wallace, and he was represented in the Indiana and Wisconsin primaries by the Democratic Governors of those states designated,as lavourite.sons' and commit- ted, of course, to turning the delegates elected in their name over to Mr. Johnson when the time comes to nominate him at the Democratic. National Convention in August. The Maryland Democratic Party is, however, so quarrelsome a community of the white and the black poor that its Governor, Millard Tawes, took himself off to Bermuda the day Wallace arrived in Maryland. Mr. Johnson had therefore to press into service Daniel Brewster, Maryland's Democratic United Stites Senator.

. Most votes would, in fact, have gone to President Johnson had his name been on the ballot paper. In the event Governor Wallace. smiling like an air hostess, endured Brewster's campaign and his threats to the poor Whites that President Johnson could be an awful vengeful man it they didn't give him their votes and his

warnings to the Negroes against 'this bigot, this interloper Wallace.' Yet Wallace seemed some- how depleted and embarrassed.

Maryland's cultural tone comes from its large population of the landless gentry who long ago defected to national Republican candidates, but think themselves Virginia Democrats, and are sensitive above all to manners. They judged Wal- lace as a poor white, and snubbed him cruelly. The Baltimore Sun fell upon him in the language of an old gentleman who has come upon an ost- ler whipping a sick horse and summons the majesty so peculiar to the hauteur which, having. always known itself socially superior, suddenly discovers itself morally superior too. So Mary- land deprived Wallace of those intimacies of ran- cour which delighted him in Indiana, where he was hit by a picket sign bearing the slogan 'God is Love.'

Cambridge on the Eastern Shore carried all that was remotely exciting among the scenes of his Maryland campaign. Cambridge is the com- mand post of Mrs. Gloria Richardson, perhaps the Negro protest movement's most dashing street captain; it has been frozen under martial law since her great demonstration last summer. When .Wallace announced be would come here to speak, -it was a mark of his irrelevancy that even Cambridge talked not about what he would say but about what Gloria Richardson 'would do, to mark his presence.

Mrs. Richardson called the Negroes to their Elks Hall at six, two hours before Wallace was appointed to speak at the Firemen's Hall; •a few blocks away past the curtain Of National Guards- men standing on Race Street dividing Cam- bridge's whiles from Cambridge's blacks. She attracted there armies of journalists and elec- tronic communicators who would not have come except on the chance of a confrontation; Mrs. Richardson always beats Cambridge on style and Canihridge always beat:....hersT real, property, The school children who are the main streng left to her after months of enforced immobili were singing the old songs on the stage of thA. hall; the adults came slowly and sat silent, som how a television studio audience, their vision barred by the cameramen and their assemblag alMost outnumbered by the reporters.

Mrs. Richardson came to the platform wearin a white ruffled shirt and a blue denim •jumpers she has never quite been able to decide whethe she is entirely a lady or entirely a revolutionary' She had, she said, taken her station with Mal.'

colm X and the militant Nationalists, although as a prim aside, she declared her disapproval o

`the indiscriminate formation of rifle clubs.' Sh praised the truly committed who had tied u traffic and sabotaged the World's Fair opening she had fallen, just as we white people do, t arguing about things which never happened jus as though they had. The voices on the platfornF kept repeating how small was the difference be- tween Wallace and any other white politician; Mrs. Richardson had managed,' by summoning these voices of alienation, to guarantee that none of her children would be so dangerously inflamed: against Wallace as to get themselves hurt in con- sequence.

There was no room to park within three blocks of the Wallace meeting; a couple walked across the grass, he in a seersucker jacket, she in print. Like everything and everyone around them, they seemed scrubbed after the Elks Hall: Wallace' gave, them little to cheer about and his pieties about the need to avoid bigotry left them puzzled. He might have worked them to some wilder pitch if his sense of social inferiority had not so dis- abled him; but one suspected that an inhibited Wallace was in key with the mood of these who would vote for him; they are dulled in feelings, essentially contented, and essentially indifferent because essentially they are invulnerable.

There is a comfortable notion that Wallace's is the losing side of darkness and Gloria Richard- son's the winning one of light. But all that was important about George Wallace's night in Cam- bridge was that the 'losers' who heard him were comfortable people; and the 'winners' who heard ' Gloria Richardson were distracted and near heartbreak. Wallace fairly snatched a packing' box full of contributions and hastened away; the platform back at the Elks Club was still thunder- ing with the stamp of speakers, each of who'll ran to the microphone with the first notion of total tactical militance that entered his head. 'Starting tomorrow, we will stop paying the land- lord,' a missionary from New York cried out. If they keep us out of their neighbourhoods, Mrs. Richardson intervened, 'starting tomorrow, we'll keep them out of ours.' Starting tomorrow,

keep them from going to their country club,' a young man proclaimed. Starting tomorrow, ‘Ne'll tie up the long-distance phones.'

But; as always, tomorrow, they must have known as everyone present knew, the landlord will be paid, the Negro waiters will serve the country 'club, the white insurance man will knock at the Negro's door. These ideas are not impractiCal; the point is that practical men do not plan tactics in shouts at public meetings. Even the old songs sound more and more like echoes; suddenly the voice of this movement is the broken mindless cry of prisoners who applied confidently for parole three years ago and now know that they must stay in gaol for the run of their lives. If that has happened to Cambridge. it must have happened in a dozen other places which a year ago were living glories in our hii- tory.