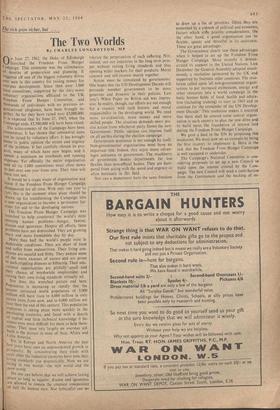 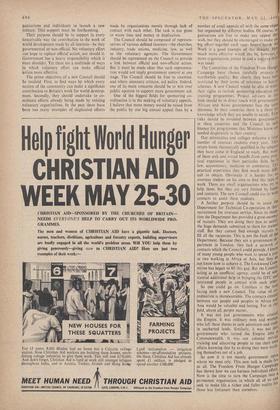 frjN June 27, 1962, the Duke of Edinburgh launched the Freedom From Hunger Campaign. This ceremony was the culmination of months of preparation and planning. It triggered off one of the biggest voluntary drives

ever seen in this country for raising money for overseas development. Since then over 1,000 local committees, supported by the sixty-seven voluntary organisations affiliated to the UK Freedom From Hunger Committee, and thousands of individuals with no previous or- ganisational allegiance, have been brought to- gether. So far they have raised over £3,000,000. It is expected that by June 27, 1965, when the Campaign ends, £5,500,000 will have been raised.

The achievements of the Campaign have been tremendous. It has shown that substantial sums can be raised by voluntary effort. It has brought home to public opinion the extent and urgency of the problem. It has carefully chosen its pro- jects, many of which have now begun, and it spends a minimum on overheads and running expenses. Yet officially the entire organisation and all its 1,000 committees must close down in just over one year from now. Their time will have run out.

It would be .a tragic waste of organisation and talent if the Freedom From Hunger Campaign disappeared for all time. With only one year to lin, this is the moment when plans should be drawn up for transforming the Campaign into a new organisation to become a permanent ful- crum for aid to the developing nations. The Freedom From Hunger Campaign was launched to help counteract the world's most Pressing human problems—hunger, famine, disease and ignorance. Despite all efforts, these Problems have not diminished. They are growing more and more formidable day by day.

More than half the world's people exist in

• deplorable conditions. They are short of food and suffer from malnutrition. Their living con- ditions are squalid and filthy. They endure some of the worst excesses of nature and are prone to such crippling diseases as bilharzia. Their edu- cational opportunities are pitifully small and their chance of worthwhile employment and raising their own living standards virtually nil. Nor does this wretched picture end here. Population is increasing so rapidly that the present estimated world population of 3,000 million will have risen to 4,000 million in only eleven years from now, and to 6,000 million not later than the end of this century. This population explosion is taking place more quickly in the developing countries, and faced with a dearth of capital and little technical knowledge it be- comes even more difficult for them to help them- selves. They must rely largely on overseas aid. S_ uch is the picture in most of Asia, Africa and Latin America. Yet in Europe and North America the past few years have seen an unprecedented growth in prosperity. By concentrating their trade with each other the industrial Countries have seen their living standards rise dramatically. Now we are

living in two worlds --the rich world and the poor world.

No one can believe that we will achieve lasting peace so long as squalor, disease and ignorance are allowed to remain the constant companions of half the human race. Nor (ethically) can we tolerate the perpetuation of such suffering. Nor, indeed, can our industries in the long term pros- per without raising living standards and thus opening wider markets for their products. Moral concern and self-interest march together.

Action must. be stimulated by governments. One hopes that the UN Development Decade will persuade member governments to be more generous and dynamic in their policies. Last year's White Paper on British aid was impres- sive. In reality, though, our efforts are not enough for a country with such historic and moral responsibility in the developing world. We need more co-ordination, more money and more skilled people. The situation demands more pre- cise action from whichever party forms the next Government. Public opinion can impress itself on all parties during the election campaign.

Government assistance is not enough by itself. Non-governmental organisations must have an important role. Indeed, they enjoy many advan- tages unknown to government. The machinery of government makes departments far less flexible than non-official bodies. They are ham- pered from acting with the speed and urgency so often necessary in this field.

Nor can a department have the same freedom

to draw up a list of priorities. Often they are enmeshed by a cobweb of political and economic, factors which stifle priority considerations. On the other hand, a good organisation can be flexible, speedy and thrustful in its assistance. These are great advantages.

The Government clearly saw these advantages when it helped to .set up the Freedom From Hunger Campaign. More recently it demon- strated its support in the United Nations. Last December the General Assembly adopted unani- mously a resolution sponsored by the UK and supported by fourteen other countries. The reso- lution called upon 'all non-governmental organi- sations to put increased enthusiasm, energy and other resources into a world campaign in the basic human fields of food, health and educa- tion (including training) to start in 1965 and to continue for the remainder of the UN Develop- ment Decade.' This resolution makes it essential that there shall be created some central organi- sation in each country to plan the new drive and to build upon the foundation of interest laid during the Freedom From Hunger Campaign.

We gave a lead in the UN by proposing this resolution. We must now set an example by being he first country to implement it. Here is the task that the Freedom From Hunger Campaign is well equipped to undertake.

The Campaign's National Committee is con- sidering proposals to set up a new Council to build upon the interest created by the Cam- paign. The new Council will need a contribution from the Government and the backing of or-

ganisations and individuals to launch a. new :venture. This support must be forthcoming.

Their purpose should be to support in every conceivable way the contribution to the work of World development made by all interests—be they governmental or-non-official. No voluntary effort can hope to replace official' action, nor should it. Government has a heavy responsibility which it must shoulder. Yet there are a multitude of ways ki which voluntary effort can make official action more effective.

The prime objectives of a new Council should be twofold. First, to find ways by which every section of the community can make a significant contribution to Britain's work for world develop- ment. Secondly, they should undertake to co- ordinate efforts already being made by existing Voluntary organisations. in the past there have been too • many examples of duplicated efforts

made by organisations merely through lack of contact with each other. The task is too great to waste time and money in duplication.

The Council should be composed of represen- tatives of various defined interests—the churches. industry, trade unions, medicine, law, as well as the voluntary agencies. The Government should be represented on the Council to provide a link between official and non-official action. But it must be made clear that such representa- tion would not imply government control at any stage. The Council should be free to examine, and where necessary criticise, aid policy. Indeed, one of its main concerns should be to win over public opinion to support more government aid.

One of the biggest fields for sponsoring co- ordination is in the making of voluntary appeals. I believe that more money would be raised from the public by one big annual appeal than by a

number of small appeals all with the same objet but organised by different bodies. Of course, or' ganisations are free to make any appeal theY wish, but they should be encouraged to make one big effort together each year. Inter-Church Aid Week is a good example of this already. HO, much more effective would this be, however, more organisations joined in and a massive drive was made.

The Committee of the Freedom From Hunger Campaign have chosen carefully projects pi worthwhile quality. But clearly they have bell restricted by their terms of reference to hun;;cr schemes. A new Council would be able to widen their sights to include sponsoring education and training programmes. Project advisers in this field should be in direct touch with governments. African and Asian governments face the same dilemma. In their countries there is a thirst for knowledge which they are unable to satisfy. Wit links should be moulded between governments in these countries and the Council to see finance for programmes that Ministers know are needed desperately in their country. Our universities and colleges welcome a large number of overseas students every year. The return home theoretically qualified in the subjects they have come to England to study. But many of them seek and would benefit from some prat' tical experience in their particular field, be it law, accountancy, medicine or commerce. This practical experience they find much more dial' cult to obtain. Obviously it is harder for an overseas student on his own to find this type °' work. There are small organisations who try t° help them, but they are very limited by funds and contacts. The new Council could use its wide contacts to assist these students. A further purpose should be to assist the Department for Technical Co-operation in the recruitment for overseas service. Since its ineer Lion the Department has provided a great number of recruits. They are doing their best to satisfY the huge demands submitted to them for trained staff. But they cannot find enough recruits t° fill all the vacancies. This is not the fault of the Department. Because they are a government de; partment in London, they lack a network contacts which the Council could provide. I know of many young people who want to spend a year or two working in Africa or Asia, but they 0° not know how to achieve it. The Lockwood 00; mittee has begun to fill this gap. But the Council, acting as an unofficial agency, could be of subj stantial additional help in bringing the DTC a° interested people in contact with each other' SO one could go on. Limitless is the Ma", facing such a new Council. The value of c°,, ordination is immeasurable. The contacts createu, between our people and peoples in Africa aa,u, Asia would be valuable and lasting. For in this field, above all, people matter. It was not just governments who created the Empire. It was ordinary men and wale° who left these shores to seek adventure and vac!e in uncharted lands. Similarly, it was not Os' governments who turned . the Empire into a Commonwealth. It was our colonial service training and educating people to run their own affairs knowing that by so doing they were work- ing themselves out of a job. So now it is not merely government upon ' whom we must rely. This new task is made for us all. The Freedom From Hunger Campaign has shown how we can harness individual effort Now is the time to turn the Campaign into a permanent organisation in which all of us can seek to make life a richer and fuller reality for those less fortunate than ourselves.