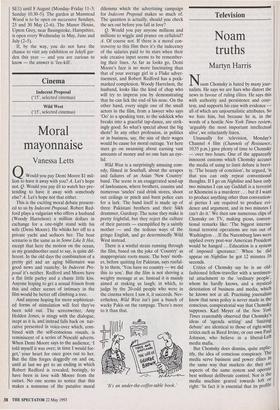 This is the exciting moral debate present- ed to us by Indecent Proposal. Robert Red- ford plays a vulgarian who offers a husband (Woody Harrelson) a million dollars in exchange for a one-night stand with his wife (Demi Moore). He whisks her off to a private yacht and seduces her. The boat scenario is the same as in Some Like It Hot, except that here the motion on the ocean, as my grandmother used to say, is quite dif- ferent. In the old days the combination of a pretty girl and an aging billionaire was good news and raunchy. In Indecent Pro- posal it's neither. Redford and Moore have a flat little parley and a chaste little kiss. Anyone hoping to get a sexual frisson from this and other scenes of intimacy in the film would be better off climbing a tree.

And anyone hoping for more sophisticat- ed forms of stimulation will feel they've been sold out. The screenwriter, Amy Holden Jones, is stingy with the dialogue, inept as it is, and instead falls back on nar- rative presented in voice-over which, com- bined with the self-conscious visuals, is reminiscent of a series of Nescafe adverts. When Demi Moore says to the audience, 'I told myself it was over; in time I would for- get,' your heart for once goes out to her. But the film forges doggedly on and on, until at last we get to an ending in which Robert Redford is revealed, boringly, to have been in love with Moore from the outset. No one seems to notice that this makes a nonsense of the putative moral

dilemma which the advertising campaign for Indecent Proposal makes so much of. The question is actually, should you check the sex out before you fall in love?

Q. Would you pay anyone millions and millions to wiggle and prance on celluloid? A. Of course not. If there is a moral con- troversy to this film then it's the indecency of the salaries paid to its stars when their sole creative input seems to be remember- ing their lines. As far as looks go, Demi Moore's face is no more fascinating than that of your average girl in a Flake adver- tisement, and Robert Redford has a pock- marked complexion. Woody Harrelson, the husband, looks like the kind of chap who will try to impress you by demonstrating that he can lick the end of his nose. On the other hand, every single one of the small actors in the film, from a lawyer who says `Oo' to a speaking tree, to the sidekick who breaks into a graceful tap-dance, are strik- ingly good. So what's special about the big shots? In any other profession, in politics or in business, say, the size of their wages would be cause for moral outrage. Yet here stars go on swanning about earning vast amounts of money and no one bats an eye- lid.

Wild West is a surprisingly amusing com- edy, filmed in Southall, about the scrapes and failures of an Asian 'New Country' band. The scene is an, exaggerated send-up of lawlessness, where brothers, cousins and numerous 'uncles' raid drink stores, shoot out ceilings or pinch and burn police cars for a lark. The band itself is made up of three Pakistani brothers and their Sikh drummer, Gurdeep. The noise they make is pretty frightful, but they reject the culture of their parents — exemplified by a saintly mother — and the tedious ways of the gringo English, and go determinedly Wild West instead.

There is a wistful strain running through the film, based on the joke of 'Country' as inappropriate roots music. The boys' moth- er, before quitting for Pakistan, says rueful- ly to them, 'You have no country — we did this to you'. But the film is not shoving a weighty message at us. Instead it is mainly aimed at making us laugh; in which, to judge by the 20-odd people who were in the cinema where I saw it, it succeeds. Nev- ertheless, Wild West isn't just a bunch of wacky Pakis on the rampage. There's more to it than that.