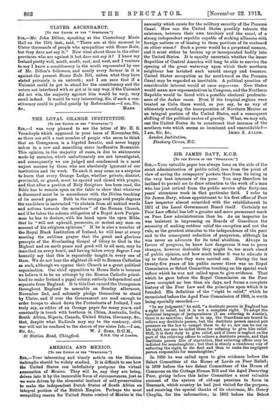 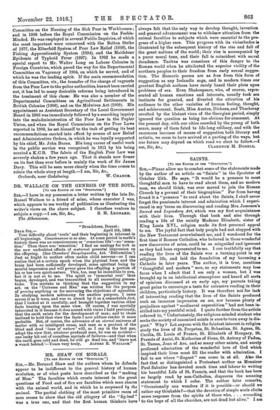 [To THE EDITOR OF THZ " SPECTATOR."] SIR,—Your valuable paper has always been on the side of the strict administration of public relief, less from the point of

view of saving the ratepayers' pockets than from its being in the very best interests of the poor. You may therefore be inclined to permit me to draw attention to the work of a man who has just retired from the public service after forty-one years' strenuous work in that particular field. I refer to Sir James Davy, whose appointment to his first office of Poor Law inspector almost coincided with the establishment in 1871 of the Local Government Board itself. Certainly no Poor Law official has left a greater and more permanent mark on Poor Law administration than he. As an inspector he was insistent in impressing on Boards of Guardians the necessity of making outdoor relief the exception and not the rule, as the greatest stimulus to the independence of the poor and to the consequent reduction of pauperism, although he was never an advocate for its total abolition. Always in favour of progress, he knew how dangerous it was to press changes, however desirable they might be, too much ahead of public opinion, and how much better it was to educate it up to them before they were carried out. During the last twenty-five years of his public career there was no Royal Commission or Select Committee touching on his special work before which he was not called upon to give evidence. That which he gave before the Royal Commission on the Poor Laws occupied no less than six days, and forms a complete history of the Poor Law and the principles upon which it is founded. His definition of the "right to relief," which be enunciated before the Aged Poor Commission of 1895, is worth being specially recorded :—

"In my judgment," he said, "a destitute person in England has a right to relief, but it is not a complete right. To adopt the technical language of jurisprudence (I am referring to Austin), there is no sanction; that is to say, the Guardians are bound to relieve any destitute person, but the destitute person cannot put pressure on the law to compel them to do so, nor can he sue on his right, nor can he indict them for refusing to give him relief. Still, it is their duty to give relief, and if there is neglect on the part of the relieving officer to relieve a destitute person, and that destitute person dies of starvation, that relieving officer may be indicted for manslaughter ; but that is clearly a cumbrous way of enforcing the right, to die first and then to make the negligent person responsible for manslaughter."

In 1880 he was called upon to give evidence before the Select Committee of the House of Lords on Poor Relief; in 1899 before the two Select Committees of the House of Commons on the Cottage Homes Bill and the Aged Deserving Poor, giving before this latter Committee a most valuable account of the system of old-age pensions in force in Denmark, which country he had just visited for the purpose, and receiving the special thanks of its chairman, Mr. Henry Chaplin, for the information; in 1902 before the Select Committee on the Nursing of the Sick Poor in Workhouses ; and in 1908 before the Royal Commission on the Feeble- Minded. He was employed in several Public Inquiries, of which the most important were concerned with the Bolton Strike of 1877, the Elberfeld System of Poor Law Relief (1888), the Fishing Apprenticeship System (1894), and the Maidstone Epidemic of Typhoid Fever (1897). In 1902 he made a special report to Mr. Walter Long on Labour Colonies in Foreign Countries, which paved the way for the Departmental Committee on Vagrancy of 1904, on which he served, and of which he was the leading spirit. If the main recommendation of this Committee, viz., the transfer of the charge of vagrants from the Poor Law to the police authorities, has not been carried out, it has led to many desirable reforms being introduced in the treatment of this class; He was also a member of the Departmental Committees on Agricultural Settlements in British Colonies (1906), and on the Midwives Act (1909). His appointment as Assistant Secretary of the Local Government Board in 1905 was immediately followed by a searching inquiry into the maladministration of the Poor Law in the Poplar Union, and when the Royal Commission on the Poor Laws reported in 1909, he set himself to the task of getting its best recommendations carried into effect by means of new Relief and Administrative Orders, in which be was loyally supported by his chief, Mr. John Burns. His long career of useful work in the public service was recognized in 1911 by his being created a K.C.B. The fabric of the English Poor Law was severely shaken a few years ago. That it stands now firmer on its feet than ever before is mainly the work of Sir James Davy. This will be seen more clearly when the time comes to relate the whole story at length.—I am, Sir, &c.,