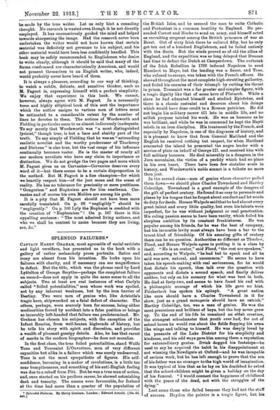 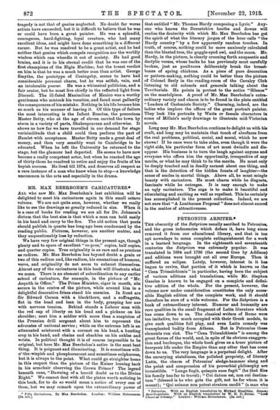 CAPTAIN HARRY GRAHAM, most agreeable of social satirists and light versifiers, has presented us in the book with a gallery of rather melancholy prose portraits. Satire and irony are absent from his intention. He looks upon his failures with charity, and if necessary can see magnificence in defeat. But the title, which was the phrase used by Lord Lyttelton of George Smythe—perhaps the completest failure on record—does not apply in quite the same sense to all the subjects. Two at least are real instances of what Carlyle called "foiled potentialities," men whose work was spoiled, not by any inherent weakness, but by the iron barrier of Destiny. Two were men of genius who, like Aristotle's tragic hero, shipwrecked on a fatal defect of character. The others, perhaps, were scarcely born for success, being either mediocrities forced by accident into a false position or beings so incurably left-handed that failure was predetermined. Mr. Graham has chosen his subjects, with the exception of the Infant Roscius, from well-beaten highroads of history, but he tells his story with spirit and discretion, and provides a wealth of pleasant gossipy details. Also, he has that rarest of merits in the modern biographer---he does not moralize.

In the first class, the true foiled potentialities, stand Wolfe Tone and Toussaint L'Ouverture, men of very different capacities but alike in a failure which was surely undeserved. Tone is not the most sympathetic of figures. His self- confidence, becoming in a maker of revolutions, is a little too near bumptiousness, and something of his anti-English feeling was due to a rebuff from Pitt. But he was a true man of action, and, once started on his perilous career, be showed astonishing dash and tenacity. The omens were favourable, for Ireland at the time had more than a quarter of the population of

the British Isles, and he seemed the man to unite Catholic and Protestant in a common hostility to England. He per- suaded Carrot and Hoche to send an army, and himself acted as recruiting sergeant among the British prisoners of war at Brest. Out of sixty Iriah there he enlisted fifty, but he only got ten out of a hundred Englishmen, and be failed entirely with the Scots. But the winds proved as of old the allies of England, and the expedition was so long delayed that Duncan had time to defeat the Dutch at Camperdown. The outbreak of the Irish Rebellion in 1798 induced Napoleon to send Humbert to Mayo, but the landing was a fiasco, and Tone, who refused to escape, was taken with the French officers. He showed throughout the most complete high-strutting gallantry, and foiled his enemies of their triumph by cutting his throat in prison. Toussaint was a far greater and simpler figure, with a tragic dignity like that of some hero of Plutarch. While a slave be had educated himself and studied Epictetus, and there is a classic restraint and decorum about his doings which would have done credit to a Roman patrician. He did not begin his military career till late in middle life, and no selfish purpose tainted his work. He was as humane as be was brilliant, and while he was in command be kept the Hayti rebels in an iron discipline. His treatment by the French, and especially by Napoleon, is one of the disgraces of history, and it is pleasant to know that from General Maitland and the English he received nothing but respect, for when Maitland evacuated the island he presented the negro leader with a service of plate on behalf of George III. and received him with full military honours. He died miserably in a dungeon in the Jura mountains, the victim of a perfidy which had no place in his own heart. There have been few statelier souls in history, and Wordsworth's noble sonnet is a tribute no more than just.

In the second class—men of genius whose character pulled them down—we should place Charles Townshend and Hartley Coleridge. Townshend is a good example of the dangers of the gift of perfect oratory. He found it so easy to persuade and please by his tongue that he forgot about conduct and let words do duty for deeds. Horace Walpole said that he bad almost every great talent and every little quality, but even his talents were imperfect, for he was without judgment or real penetration. His ruling passion seems to have been vanity, which foiled his sleepless ambition by its constant freakishness. He was popular among his friends, for he was the best of company, but his incurable levity must always have been a bar to the truest kind of friendship. Of his amazing gifts of oratory there can be no question. Authorities so different as Thurlow, Flood, and Horace Walpole agree in putting it in a class by "He is an orator," said Flood, "the rest are speakers," and, according to Walpole, "he had but to speak and all he said was new, natural, and uncommon." He seems to have taken his speech-making with real seriousness, for he would first dictate his speech, then talk over the question with opponents and dictate a second speech, and finally deliver neither, but rely on his memory for what was best in both. He died at forty-two, and seems to have faced his end with a philosophic courage of which his life gave no hint. Fitzherbert has spoken his epitaph. "A great nation like ours should have a Charles Townshend in it for show, just as a grand menagerie should have an ostrich." Hartley Coleridge, too, was a man of genius. He was the most precocious and brilliant of boys, but the boy never grew up. To the end of his life he remained an elfish creature, the strangest schoolmaster that youth ever bad, for out of school hours he would run about the fields flapping his arms like wings and talking to himself. He was deeply loved by the peasants of the Lake District for his simplicity and kindness, and his odd ways gave him among them a reputation for extraordinary genius. Drink dogged his footsteps—be used to say he acquired the habit in big disappointment at not winning the Newdigate at Oxford—and he was incapable of serious work, but he has left enough to prove that the son of his father was no stranger to the high world of imagination. It was typical of him that as he lay on his deathbed he asked that the school-children might be given a holiday on the day of his funeral. "I would connect the happiness of childhood with the peace of the dead, not with the struggles of the dying."

Last come those who failed because they had not the stuff of success. Hayden the painter is a tragic figure, but his tragedy is not that of genius neglected. No doubt far worse artists have succeeded, but it is difficult to believe that he was or could have been a great painter. He was a splendid, courageous, hard-fighting, loyal creature, who had many excellent ideas, and might have done something in a different career. But he was resolved to be a great artist, and he had neither that genius which compels recognition nor the worldly wisdom which can wheedle it out of society. He had good brains, and it is to his eternal credit that he was one of the first champions of the Elgin Marbles; but the truest verdict on him is that he was a much better man than artist. George Smythe, the prototype of Coningsby, seems to have had considerable personal charm, but he was selfish, vain, and an intolerable poseur. He was a whimsical politician, and a fair orator, but he must live chiefly in the reflected light from Disraeli. The ill-fated Maximilian of Mexico was a worthy gentleman who mistook his vocation, and faced most gallantly the consequences of his mistake. Nothing in his life became him so much as his manner of leaving it. Of this type of failure the most interesting is the Infant Rosciue, the precocious Master Betty, who at the age of eleven carried the town by storm in a variety of parts, Shakespearean and otherwise. It shows us bow far we have travelled in our demand for stage verisimilitude that a child could then perform the part of Hamlet with acceptance. Master Betty made a great deal of money, and then very sensibly went to Cambridge to be educated. When he left the University he returned to the stage, but the glamour had departed. He seems to have now become a really competent actor, but when he reached the age of thirty-three he resolved to retire and enjoy the fruits of his boyish success. He lived till 1874, and deserves all respect as a rare instance of a man who knew when to stop—a knowledge uncommon in the arts and especially in the drama.