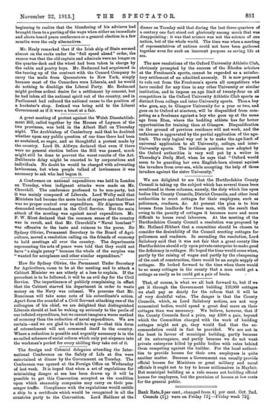 The new resolutions of the Oxford University Athletic Club, obviously

prompted by the success of the Rhodes scholars at the Freshmen's sports, cannot be regarded as a satisfac- tory settlement of an admitted anomaly. It is now proposed to rule out from the Freshmen's sports all competitors who have resided for any time in any other University or similar institution, and to impose an age limit of twenty-four on all competitors in the Oxford University Athletic Club sports as distinct from college and inter-University sports. Thus a boy who goes, say, to Glasgow University for a year or two, and goes on to Oxford at nineteen, will be disqualified from corn- peting as a freshman against a boy who goes up at the same age from Eton, where the budding athlete has far better opportunities for training than at Glasgow. Disqualification on the ground of previous residence will not work, and the unfairness is aggravated by the partial application of the age- limit. The only logical way out is to make the age-limit of universal application to all University, college, and inter- University sports. The invidious position now adopted by the Oxford authorities is very well put by a writer in Thursday's Daily Mail, when he says that "Oxford would seem to be guarding her own English-born alumni against the invaders from over-sea, while accepting the help of those invaders against the sister University."