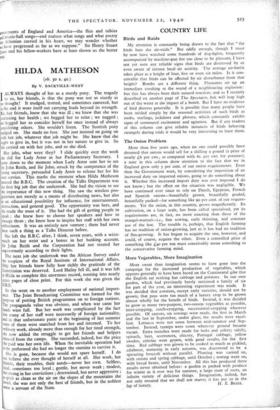 T ALWAYS thought of her as a sturdy pony. The tragedy 1 to us, her friends, is that the pony was not so sturdy as we thought! It trudged, trotted, and sometimes cantered, but in the end it wore itself out carrying loads beyond its strength. We, her friends, knew that she was ill ; we knew that she was orrtaxing her health ; we begged her to relax ; we nagged ; we begged her to consider herself for once instead of always considering others. She wouldn't listen. The Scottish pony trudged on. She made no fuss. She just insisted on going on with her job, whatever that job might be. She knew that she ought to give in, but it was not in her nature to give in. So she carried on with her jobs, and so she died.

Her jobs, what were they? I slide quickly over the work she did for Lady Astor as her Parliamentary Secretary. I come down to the moment when Lady Astor sent her to see Sir John Reith, and Sir John, struck by the competence of the young secretary, persuaded Lady Astor to release her for his own service. This marks the moment when Hilda Matheson entered the B.B.C. The creation of the Talks Department was the first big job that she undertook. She had the vision to see the importance of this new thing. She saw the wireless pro- grammes not merely as a means of distributing news, but also as an educational possibility for influence, for entertainment, instruction, and general good. The opportunity was hers, and she made the most of it. She had the gift of getting people to speak ; she knew how to choose her speakers and how to manage them ; she knew how to inspire her staff with her own enthusiasm. It was an entirely new venture ; there had never been such a thing as a Talks Director before.

She left the B.B.C. after, I think, seven years, with a wrist- watch on her wrist and a bonus in her banking account. Sir John Reith and the Corporation had not treated her ungenerously according to their lights.

The next job she undertook was the African Survey under the auspices of the Royal Institute of International Affairs. Only her friends knew fully how richly the gratitude of the Commission was deserved. Lord Hailey fell ill, and it was left to Hilda to complete this enormous record, running into nearly 2,000 pages of close print. For this work she was given the 0.B.P.

So she went on to another employment of national import- ance. The Joint Broadcasting Committee was formed for the Purpose of putting British programmes on to foreign stations. The propaganda value was obvious, and when war came her hands were full. But her work was complicated by the fact that many of her staff were necessarily of foreign nationality, and in that unfortunate panic at the beginning of last summer some of them were snatched from her and interned. To her ordinary work, already more than enough for her tired strength, she now added the struggle to get her friends and helpers released from the camps. She succeeded, indeed, but the price she paid was her own life. When the inevitable operation had to be performed she had no longer the stamina to survive it. She is gone, because she would not spare herself. I do not believe she ever thought of herself at all. Her work, her Friends, their troubles, their needs—never her own. Selfless, sometimes too loyal ; gentle, but never weak ; modest, but strong in her convictions ; determined, but never aggressive ; a spirit as clean as the air on the slopes of the mountains she loved, she was not only the best of friends, but in the noblest sense a servant of the State.