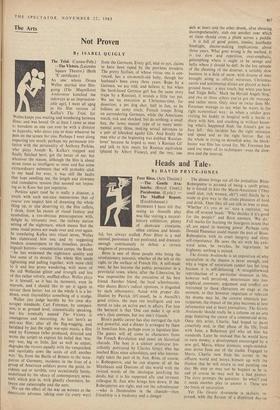 Perkins apart (and he is really a disaster, a youth with such nut-case mannerisms that of course you suspect him of dreaming the whole thing up, or else deserving it), the film suffers, I think, from hn excess of visual fantasy and symbolism, a too-obvious preoccupation with, delight in, virtuosity over, the railway station setting of the nightmare, which means that the same visual points are made over and over again. In translating Kafka into visual terms, Welles has elaborated him too, and by suggesting modern counterparts to the (timeless, psycho- logical) horrors—concentration camps, the Bomb —he has weakened the nightmare quality and lost some of its density. The whole film needs tightening and pulling together, with more chill to it and less prosy wandering, with more of the old Wellesian glitter and strength and less of this rather velvety, muffled effect. Welles plays in it himself, so it has its moments, even its marvels, and I should like to see it again to savour them better; but on the whole it is a let- down, even (incredibly) something of a stodge.

Welles you judge harshly by his own sky- scraper standards; Carl Foreman, by compari- son,, is at ground level, cinematically speaking, but his ironically named The Victors is courageous and interesting. At last here's an anti-war film; after all the flag-wagging, and heralded by just the right war-epic music, a film used by Foreman (who produced, directed and wrote the script) to express his belief that 'war, any war, big or little, Just as well as unjust, degrades the victors equally with the vanquished, and inevitably sows the seeds of still another war.' So, from the Battle of Britain to the occu- pation of Germany, incidents in the lives of a group of American soldiers prove the point, in- cidents sad or terrible, very occasionally funny, underlined by the idiocy of contemporary news- reels which pop in, with ghastly cheeriness, be- tween one catastrophe and the next.

We see the effect of the war on women as the Americans advance. taking over (in every way) from the Germans. Every girl, nice or not, claims to have been raped by the previous invaders. The pretty Sicilian, of whose virtue one is con- vinced, has a six-month-old baby, though her husband's been away three years. Rape by a German, we are told, and believe it; but when the hard-faced German girl has the same story (rape by a Russian), it sounds a little too pat. We see 'an execution at Christmas-time, for desertion; a pet dog shot, half in fun, as he follows an army truck; French troops firing on surrendering Germans, while the Americans watch, sick and shocked, but do nothing; a small boy, the `army mascot' type of so many senti- mental army films, making sexual advances to a pair of (shocked again) GIs. And finally the man who at the beginning was dubbed 'Russian- lover' because he hoped to meet 'a Russian GI' and talk to him meets his Russian equivalent (played by Albert Finney), and the two, one sick at heart and the other drunk, after shouting incomprehensibly, stab one another over which of them should cross a plank across a puddle.

It is full of good points, ironies, justifiable hindsight, shame-making implications about those years. What goes wrong is the method. It is too slow and repetitive, over-emphatic, galumphing where it ought to be savage and hefty where it should be deft. In the key episode of the shooting of the deserter, a suitably slow business in a field of snow, with dozens of men brought along as official witnesses, Christmas carols and sentimental ditties are played as back- ground music: a nice touch, but when you have had 'Jingle Bells,' Hark the Herald Angels Sing,' and two or three others you've got the message, and rather more. Only once or twice does Mr. Foreman manage to say what he wants in the right economical way: as when a soldier goes visiting his buddy in hospital with a bottle to share with him, and crashing in without know- ing what's happened finds the friend's got no face left: this incident has the right reticence and speed and so the right horror. But on the whole in trying .to demolish what the block- buster war film has stood for, Mr. Foreman has used too many of its techniques—even the slow- ness and the interval.