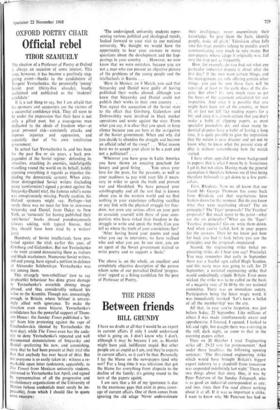 The election of a Professor of Poetry at Oxford is always an occasion of some interest. This time, however, it has become a positively stag- gering event—thanks to the candidature of Yevgeni Yevtushenko, the perennially 'young' Soviet poet (thirty-five already), loudly acclaimed and publicised as the 'students' candidate.'

It is a sad thing to say, but I am afraid that his sponsors and supporters are the victims of a successful confidence trick. They all seem to be under the impression that their hero is not only a gifted poet, but a courageous man dedicated to the ideals of freedom who—at great personal risk—constantly attacks and exposes injustice and oppression, and especially that of his own totalitarian government.

In actual fact Yevtushenko is, and has been for the past five or six years, a hack pro- pagandist of the Soviet regime: defending its atrocities, attacking its enemies, indefatigably travelling round the world on its behalf, boldly exposing everything it regards as injustice (in- cluding the democratic system). When sixty- three distinguished Soviet writers (including many 'conformists') signed a protest against the Sinyaysky-Daniel trial, the famous rebel's name was conspicuously missing. Purely caution, his Oxford sponsors might say. Perhaps—but

surely there was no need for him to denounce Sinyaysky and Daniel, from Dakar to New

York, as 'turncoats' for having published their 'anti-Soviet' books abroad pseudonymously (always adding, with typical finesse, that they should have been tried by a writers' jury).

Hundreds of Soviet intellectuals have pro- tested against the trial, earlier this year, of Ginsburg and Galanskov. But not Yevtushenko

—he went around denouncing them as traitors and black marketeers. Numerous Soviet writers,

old and young, have signed a petition in defence of Alexander Solzhenitsyn. Yevtushenko was not among them.

This strangely 'non-rebellious' (not to say despicable) behaviour has done grave damage to Yevtushenko's erstwhile shining image abroad, and thus considerably reduced his value to the Kremlin. Though not, interestingly enough, in Britain, where 'leftism' is unvary- ingly allied with ignorance. To make the situation even more bizarre, Yevtushenko's candidature has the powerful support of Thom-

son House: the Sunday Tunes published a 'let- ter' from him protesting against the rape of

Czechoslovakia (denied by Yevtushenko the

next day), while The Times even has the auda- city to deny Yevtushenko's repeated and well

documented denunciations of Sinyaysky and Daniel—preferring his new, and astonishing, story that he had been present at their trial (the

first that anybody has ever heard of this). But not everyone is so easily taken in: witness a re- markable open letter (unknown, apparently, to The Times) from Mexican university students,

addressed to Yevtushenko last April, and signed by representatives of all the progressive and revolutionary organisations of the. University of Mexico (whose credentials must surely be im- peccable), from which I should like to quote some excerpts: The undersigned, university students repre- senting various political and ideological trends, looked forward to your visit to our national university. We thought we would have the opportunity to hear your answers to many questions about the development and the hap- penings in your country . . However, we now know that we were mistaken, because you are not a man who can present an objective picture of the problems of the young people and the intellectuals in Russia ...

You repeat the accusation of the Soviet state to the effect that Ginsburg, Galanskov and Dobrovolsky were involved in black market operations and wrote against the state. From what you say, it is clear that you speak or keep silence because you are here at the instigation of the Soviet government. When and why did you decide to abandon the struggle and become an official rebel of the ussa? . . . What reason have we to accept your claim to be a poet and not a politician? . . .

'Wherever you have gone in Latin America you have shown an amazing penchant for luxury and good living . . . You stress your love for the poor, for the peasants, as well as your readiness to pay with your life if neces- sary in order to speak the truth and prevent war and bloodshed. We have perused your autobiography and all the rest that is known about you in the western world and we find nothing in your experience reflecting sacrifice or any link with the physical struggle for free- dom, nor even any serious effort on your part -to associate yourself with those of your com- patriots who have risked their freedom in the struggle to write and speak the truth. Can you tell us where the truth of your convictions lies?

'After having heard your poems and read what you say in interviews, we have realised who and what you are. In our view, you are an agent of the Soviet government trained to write poetry and to support a thesis.'

The above is, on the whole, an excellent and completely objective description of the person whom some of our parochial Oxford 'progres- sives' regard as a fitting candidate for the post of Professor of Poetry.