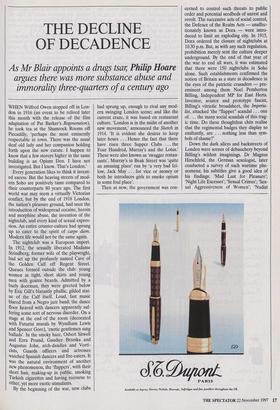 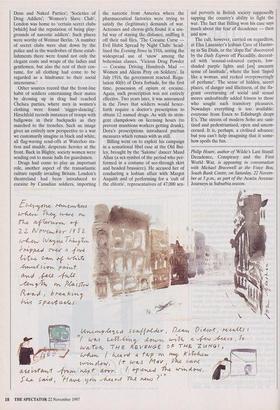 THE DECLINE OF DECADENCE

WHEN Wilfred Owen stopped off in Lon- don in 1916 (an event to be relived later this month with the release of the film adaptation of Pat Barker's Regeneration), he took tea at the Shamrock Rooms off Piccadilly, 'perhaps the most eminently respectable in town. There was the usual deaf old lady and her companion holding forth upon the new curate. I happen to know that a few storeys higher in the same building is an Opium Den. I have not investigated. But I know. That's London.'

Every generation likes to think it invent- ed excess. But the heaving streets of mod- ern Soho are positively tame compared to their counterparts 80 years ago. The first world war may seem a virtually Victorian conflict, but by the end of 1918 London, the nation's pleasure ground, had seen the introduction of widespread cocaine, heroin and morphine abuse, the invention of the nightclub, and every kind of sexual expres- sion. An entire counter-culture had sprung up to cater to the spirit of carpe diem. Modern life would not be the same again.

The nightclub was a European import. In 1912, the sexually liberated Madame Strindberg, former wife of the playwright, had set up the profanely named Cave of the Golden Calf off Regent Street. Queues formed outside the club: young women in tight, short skirts and young men with goatee beards. Admitted by a burly doorman, they were greeted below by Eric Gill's blatantly phallic, gilded stat- ue of the Calf itself. Loud, fast music blared from a Negro jazz band; the dance floor heaved with dancers apparently suf- fering some sort of nervous disorder. On a stage at the end of the room (decorated with Futurist murals by Wyndham Lewis and Spencer Gore), 'exotic gentlemen sang ballads'. In the smoky haze, Osbert Sitwell and Ezra Pound, Gaudier Brzeska and Augustus John, arch-dandies and Vorti- cists, Guards officers and actresses watched Spanish dancers and fire-eaters. It was the natural environment of another new phenomenon, the 'flappers', with their short hair, making-up in public, smoking Turkish cigarettes and having recourse to other, yet more exotic stimulants.

By the beginning of the war, new clubs had sprung up, enough to rival any mod- em swinging London scene; and like the current craze, it was based on restaurant culture. 'London is in the midst of another new movement,' announced the Sketch in 1914. 'It is evident she desires to keep later hours . . . Hence the fact that there have risen three Supper Clubs . . . the Four Hundred, Murray's and the Lotus.' These were also known as 'swagger restau- rants'. Murray's in Beak Street was 'quite an amusing place' run by 'a very bad fel- low, Jack May . . . for vice or money or both he introduces girls to smoke opium in some foul place'.

Then as now, the government was con- cerned to control such threats to public order and potential seedbeds of unrest and revolt. The successive acts of social control, the Defence of the Realm Acts — unaffec- tionately known as Dora — were intro- duced to limit an exploding city. In 1915, Dora ordered the closure of nightclubs at 10.30 p.m. But, as with any such regulation, prohibition merely sent the culture deeper underground. By the end of that year of the war to end all wars, it was estimated that there were 150 nightclubs in Soho alone. Such establishments confirmed the notion of Britain as a state in decadence in the eyes of the patriotic crusaders — pre- eminent among them Noel Pemberton Billing, Independent MP for East Herts. Inventor, aviator and prototype fascist, Billing's vitriolic broadsheet, the Imperia- list, attacked 'the "flapper" scandal . . . one of . . . the many social scandals of this trag- ic time. Do these thoughtless chits realise that the regimental badges they display so exultantly, are . . . nothing less than sym- bols of shame?'

Down the dark alleys and backstreets of London were scenes of debauchery beyond Billing's wildest imaginings. Dr Magnus Hirschfeld, the German sexologist, later conducted a survey of such wartime phe- nomena; his subtitles give a good idea of his findings: 'Mad Lust for Pleasure'; `Night Life Excesses'; 'Sexual Crimes'; 'Sex- ual Aggressiveness of Women'; 'Nudist Dens and Naked Parties'; 'Societies of Drug Addicts'; 'Women's Slave Club'. London was home to 'certain secret clubs [which] had the reputation of being play- grounds of narcotic addicts'. Such places were worthy of Weimar Berlin. 'A number of secret clubs were shut down by the police and in the wardrobes of these estab- lishments there were found not only the elegant coats and wraps of the ladies and gentlemen, but also the rest of their cos- tume, for all clothing had come to be regarded as a hindrance to their social intercourse.'

Other sources record that the front-line habit of soldiers entertaining their mates by dressing up in drag had reached Chelsea parties, where men in women's clothing were found 'nigger-dancing'. Hirschfeld records instances of troops with ballgowns in their backpacks as they marched to the trenches. Such an image gives an entirely new perspective to a war we customarily imagine in black and white, all flag-waving send-offs at Waterloo sta- tion and muddy, desperate heroics at the front. Back in Blighty, society women were sending out to music halls for guardsmen.

Drugs had come to play an important role, another aspect of the transatlantic culture rapidly invading Britain. London's theatreland had been introduced to cocaine by Canadian soldiers, importing the narcotic from America where the pharmaceutical factories were trying to satisfy the (legitimate) demands of war. Actresses and chorus-girls found it a use- ful way of staying the distance, sniffing it off their nail files. 'The Cocaine Curse Evil Habit Spread by Night Clubs' head- lined the Evening News in 1916, noting the widespread use of 'snow' among the bohemian classes. 'Vicious Drug Powder — Cocaine Driving Hundreds Mad Women and Aliens Prey on Soldiers'. In July 1916, the government reacted. Regu- lation 40(b) of Dora forbade, for the first time, possession of opium or cocaine. Again, such proscription was not entirely effective. Two years later, it was announced in the Times that soldiers would hence- forth require a doctor's prescription to obtain 12 named drugs. As with its strin- gent clampdown on licensing hours (to prevent munitions workers getting drunk), Dora's proscriptions introduced puritan measures which remain with us still.

Billing went on to exploit his campaign in a sensational libel case at the Old Bai- ley, brought by the 'Salome' dancer Maud Allan (a sex symbol of the period who per- formed in a costume of see-through skirt and beaded brassiere). He accused her of conducting a lesbian affair with Margot Asquith and of performing for a 'cult of the clitoris', representatives of 47,000 sex- ual perverts in British society supposedly sapping the country's ability to fight the war. The fact that Billing won his case says much about the fear of decadence — then and now.

The cult, however, carried on regardless, at Elsa Lancaster's lesbian Cave of Harmo- ny in Six Dials, or the 'dope flat' discovered by the Daily Express off Piccadilly, decorat- ed with 'sensual-coloured carpets, low- shaded purple lights and [an] uncanny sense of lassitude', where the host 'lisped like a woman, and reeked overpoweringly of perfume'. The sense of hidden, secret places, of danger and illicitness, of the fla- grant overturning of social and sexual mores undoubtedly added frisson to those who sought such transitory pleasures. Nowadays everything is too available; everyone from Essex to Edinburgh drops E's. The streets of modern Soho are sani- tised and pedestrianised, open and uncon- cerned. It is, perhaps, a civilised advance; but you can't help imagining that it some- how spoils the fun.

Philip Hoare, author of Wilde's Last Stand: Decadence, Conspiracy and the First World War, is appearing in conversation with Michael Bracewell at the Voice Box, South Bank Centre, on Saturday, 22 Novem- ber at 5 p.m., as part of the Acacia Avenue: Journeys in Suburbia season.