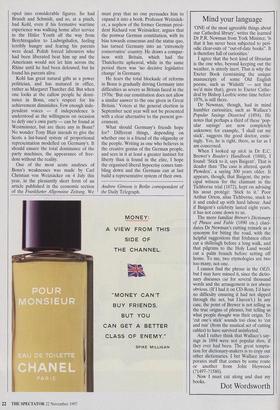 `ONE of the most agreeable things about our Cathedral library', writes the learned Dr P.R. Newman from York Minister, 'is that it has never been subjected to peri- odic clear-outs of "out-of-date books". It is therefore full of curiosities.'

I agree that the best kind of librarian is the one who, beyond keeping out the weather, is utterly inert. That is why the Exeter Book (containing the unique manuscripts of some Old English poems, such as Widsith' — not that we'd miss that), given to Exeter Cathe- dral by Bishop Leofric some time before 1076, is still there.

Dr Newman, though, had in mind humbler curiosities, such as Wallace's Popular Sayings Dissected (1894). He notes that perhaps a third of these 'pop- ular sayings' are now completely unknown; for example, 'I shall cut my stick', suggests the good doctor, entic- ingly. Yes, he is right, there, as far as I am concerned.

When I looked up stick in Dr E.C. Brewer's Reader's Handbook (1880), I found: 'Stick to it, says Baigent'. That is deader than 'The case is altered, quoth Plowden', a saying 300 years older. It appears, though, that Baigent, the prin- cipal witness for the claimant in the Tichborne trial (1872), kept on advising his stout protege: 'Stick to it.' Poor Arthur Orton, alias Tichborne, stuck to it and ended up with hard labour. And if Baigent's celebrity lasted eight years, it has not come down to us.

The more familiar Brewer's Dictionary of Phrase and Fable (1890 etc.) eluci- dates Dr Newman's cutting remark as a synonym for biting the road, with the helpful suggestions that Irishmen often cut a shillelagh before a long walk, and that pilgrims to the Holy Land would cut a palm branch before setting off home. To me, two etymologies are two too many, not one.

I cannot find the phrase in the OED, but I may have missed it, since the dictio- nary discusses cut for several thousand words and the arrangement is not always obvious. (If I had it on CD-Rom, I'd have no difficulty ensuring it had not slipped through the net, but I haven't.) In any case, the point of Brewer is not telling us the true origins of phrases, but telling us what people thought was their origin. To `cut one's stick' sounds too close to 'cut and run' (from the nautical act of cutting cables) to have survived uninfected.

And I rather think that Wallace's say- ings in 1894 were not popular then, if they ever had been. The great tempta- tion for dictionary-makers is to copy out other dictionaries. I bet Wallace incor- porates stuff that comes by some route or another from John Heywood (?1497–?1580).

Now I must cut along and dust my books.