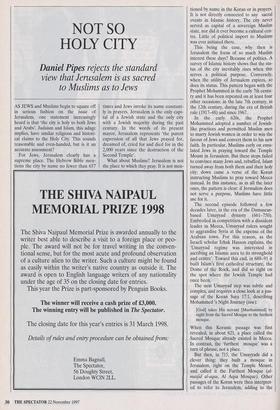 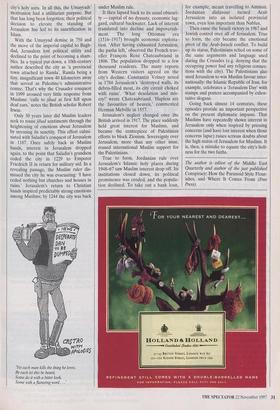 NOT SO HOLY CITY

view that Jerusalem is as sacred to Muslims as to Jews

AS JEWS and Muslims begin to square off in serious fashion on the issue of Jerusalem, one statement increasingly heard is that 'the city is holy to both Jews and Arabs'. Judaism and Islam, this adage implies, have similar religious and histori- cal claims to the Holy City. This sounds reasonable and even-handed, but is it an accurate assessment?

For Jews, Jerusalem clearly has a supreme place. The Hebrew Bible men- tions the city by name no fewer than 657 times and Jews invoke its name constant- ly in prayers. Jerusalem is the only capi- tal of a Jewish state and the only city with a Jewish majority during the past century. In the words of its present mayor, Jerusalem represents 'the purest expression of all that Jews prayed for, dreamed of, cried for and died for in the 2,000 years since the destruction of the Second Temple'.

What about Muslims? Jerusalem is not the place to which they pray. It is not men- tioned by name in the Koran or in prayers. It is not directly connected to any sacral events in Islamic history. The city never served as capital of a sovereign Muslim state, nor did it ever become a cultural cen- tre. Little of political import to Muslims was ever initiated there.

This being the case, why then is Jerusalem the focus of so much Muslim interest these days? Because of politics. A survey of Islamic history shows that the sta- tus of the city inevitably rises when this serves a political purpose. Conversely, when the utility of Jerusalem expires, so does its status. This pattern began with the Prophet Mohammed in the early 7th centu- ry and it has been repeated on at least four other occasions: in the late 7th century, in the 12th century, during the era of British rule (1917-48) and since 1967.

In the early 620s, the Prophet Mohammed adopted a number of Jewish- like practices and permitted Muslim men to marry Jewish women in order to win the favour of Jews and convert them to his new faith. In particular, Muslims early on emu- lated Jews in praying toward the Temple Mount in Jerusalem. But these steps failed to convince many Jews and, rebuffed, Islam turned away from both them and their holy city; down came a verse of the Koran instructing Muslims to pray toward Mecca instead. In this instance, as in all the later ones, the pattern is clear: if Jerusalem does not serve a purpose, Muslims have little use for it.

The second episode followed a few decades later, in the era of the Damascus- based Umayyad dynasty (661-750). Embroiled in competition with a dissident leader in Mecca, Umayyad rulers sought to aggrandise Syria at the expense of the Arabian town. For this reason, as the Israeli scholar Izhak Hasson explains, the `Umayyad regime was interested in ascribing an Islamic aura to its stronghold and centre'. Toward this end, in 688-91 it built Islam's first cathedral structure, the Dome of the Rock, and did so right on the spot where the Jewish Temple had once been.

The next Umayyad step was subtle and complex, and requires a close look at a pas- sage of the Koran Sura 17:1, describing Mohammed 's Night Journey (isra):

[God] takes His servant [Muohammed] by night from the Sacred Mosque to the furthest mosque.

When this Koranic passage was first revealed, in about 621, a place called the Sacred Mosque already existed in Mecca. In contrast, the 'furthest mosque' was a turn of phrase, not a place.

But then, in 715, the Umayyads did a clever thing: they built a mosque in Jerusalem, right on the Temple Mount, and called it the Furthest Mosque (al- masjid al-aqsa, Al Aqsa Mosque). Other passages of the Koran were then interpret- ed to refer to Jerusalem, adding to the city's holy aura. In all this, the Umayyads' motivation had a utilitarian purpose. But that has long been forgotten; their political decision to elevate the standing of Jerusalem has led to its sanctification in Islam.

With the Umayyad demise in 750 and the move of the imperial capital to Bagh- dad, Jerusalem lost political utility and declined to the point of becoming a sham- bles. In a typical put-down, a 10th-century author described the city as 'a provincial town attached to Ramla', Ramla being a tiny, insignificant town 40 kilometers away that served as Palestine's administrative centre. That's why the Crusader conquest in 1099 aroused very little response from Muslims: 'calls to jihad at first fell upon deaf ears,' notes the British scholar Robert Irwin.

Only 50 years later did Muslim leaders seek to rouse jihad sentiments through the heightening of emotions about Jerusalem by stressing its sanctity. This effort culmi- nated with Saladin's conquest of Jerusalem in 1187. Once safely back in Muslim hands, interest in Jerusalem dropped again, to the point that Saladin's grandson ceded the city in 1229 to Emperor Friedrich II in return for military aid. In a revealing passage, the Muslim ruler dis- missed the city he was evacuating: 'I have ceded nothing but churches and houses in ruins.' Jerusalem's return to Christian hands inspired predictably strong emotions among Muslims; by 1244 the city was back

`Yet each man kills the thing he loves, By each let this be heard Some do it with a bitter look, Some with a flattering word . .

It then lapsed back to its usual obscuri- ty — capital of no dynasty, economic lag- gard, cultural backwater. Lack of interest translated into decline and impoverish- ment. The long Ottoman era (1516-1917) brought economic exploita- tion. 'After having exhausted Jerusalem, the pasha left,' observed the French trav- eller Francois Rene Chateaubriand in 1806. The population dropped to a few thousand residents. The many reports from Western visitors agreed on the city's decline. Constantin Volney noted in 1784 Jerusalem's 'destroyed walls, its debris-filled moat, its city circuit choked with ruins'. 'What desolation and mis- ery!' wrote Chateaubriand. 'Hapless are the favourites of heaven,' commented Herman Melville in 1857.

Jerusalem's neglect changed once the British arrived in 1917. The place suddenly held great interest for Muslims, and became the centrepiece of Palestinian efforts to block Zionism. Sovereignty over Jerusalem, more than any other issue, roused international Muslim support for the Palestinians.

True to form, Jordanian rule over Jerusalem's Islamic holy places during 1948-67 saw Muslim interest drop off. Its institutions closed down, its political prominence was eroded, and the popula- tion declined. To take out a bank loan, for example, meant travelling to Amman. Jordanian disfavour turned Arab Jerusalem into an isolated provincial town, even less important than Nablus.

Then came the Israeli victory in 1967 and Jewish control over all of Jerusalem. True to form, the city became the emotional pivot of the Arab-Israeli conflict. To build up its status, Palestinians relied on some of the same arguments and language used during the Crusades (e.g. denying that the occupying power had any religious connec- tions with the city). The Palestinians also used Jerusalem to win Muslim favour inter- nationally: the Islamic Republic of Iran, for example, celebrates a 'Jerusalem Day' with stamps and posters accompanied by exhor- tative slogans.

Going back almost 14 centuries, these episodes provide an important perspective on the present diplomatic impasse. That Muslims have repeatedly shown interest in Jerusalem only when inspired by pressing concerns (and have lost interest when those concerns lapse) raises serious doubts about the high status of Jerusalem for Muslims. It is, then, a mistake to equate the city's holi- ness for the two faiths.

The author is editor of the Middle East Quarterly and author of the just published Conspiracy: How the Paranoid Style Flour- ishes, and Where It Comes From (Free Press).