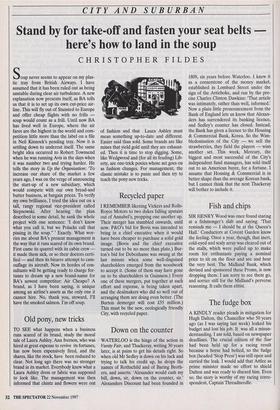 Down on the counter

WATERLOO is the hinge of the action in Vanity Fair, and Thackeray, writing 30 years later, is at pains to get his details right. So when old Mr Sedley is down on his luck and trying to talk his credit up, he drops the names of Rothschild and of Baring Broth- ers, and asserts: 'Alexander would cash my bill, down, sir, down on the counter, sir.' Alexanders Discount had been founded in 1809, six years before Waterloo. I knew it as a cornerstone of the money market, established in Lombard Street under the sign of the Artichoke, and run by the pre- cise Charles Clinton Dawkins: 'That article was intimately, rather than well, informed.' Now a plain little pronouncement from the Bank of England lets us know that Alexan- ders has surrendered its banking licence, and Sedley's counter has closed. Instead, the Bank has given a licence to the Housing & Commercial Bank, Korea. So the Wim- bledonisation of the City — we sell the strawberries, they field the players — wins another set. This week, Mercury, the biggest and most successful of the City's independent fund managers, has sold itself out to an American buyer, for a fortune. I assume that Housing & Commercial is in better shape than the average Korean bank, but I cannot think that the next Thackeray will bother to include it.