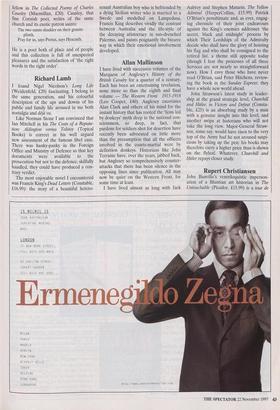 I have lived with successive volumes of the Marquess of Anglesey's History of the British Cavalry for a quarter of a century. Each has been an entertaining revelation, none more so than the eighth and final volume — The Western Front 1915-1918 (Leo Cooper, £40). Anglesey excoriates Alan Clark and others of his mind for the instant history that has rooted the 'lions led by donkeys' myth deep in the national con- sciousness, so deep, in fact, that pardons for soldiers shot for desertion have recently been advocated on little more than the presumption that all the officers involved in the courts-martial were by definition donkeys. Historians like John Terraine have, over the years, jabbed back, but Anglesey so comprehensively counter- attacks that there has been silence in the opposing lines since publication. All may now be quiet on the Western Front, for some time at least.

I have lived almost as long with Jack Aubrey and Stephen Maturin. The Yellow Admiral (HarperCollins, £15.99) Patrick O'Brian's penultimate and, as ever, engag- ing chronicle of their joint endeavours against the King's enemies addresses 'the secret, black and midnight' process by which Their Lordships of the Admiralty decide who shall have the glory of hoisting his flag and who shall be consigned to the retired list, a theme still apposite today (though I fear the processes of all three Services are not nearly so straightforward now). How 1 envy those who have never read O'Brian, said Peter Hitchens, review- ing the book in the Sunday Express: they have a whole new world ahead.

John Strawson's latest study in leader- ship at the grand strategic level, Churchill and Hitler, in Victory and Defeat (Consta- ble, £25) is an absorbing study by a man with a genuine insight into this level, and another swipe at historians who will not take the long view. Major-General Straw- son, some say, would have risen to the very top of the Army had he not aroused suspi- cions by taking up the pen: his books may therefore carry a higher price than is shown on the flyleaf. Whatever, Churchill and Hitler repays closer study.