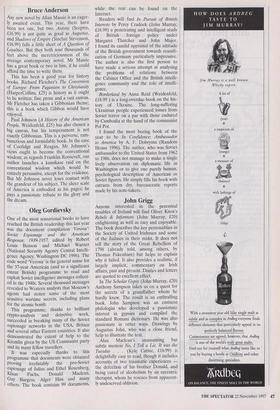 Anyone interested in the perennial troubles of Ireland will find Oliver Knox's Rebels & Informers (John Murray, £20) enlightening as well as racy and enjoyable. The book describes the key personalities in the Society of United Irishmen and some of the Judases in their midst. It does not tell the story of the Great Rebellion of 1798 (already told, among others, by Thomas Pakenham) but helps to explain why it failed. It also provides a realistic, if largely implicit, commentary on Irish affairs, past and present. Diaries and letters are quoted to excellent effect.

In The Scholar Gypsy (John Murray, £20) Anthony Sampson takes us on a quest for the secrets of a grandfather whom he hardly knew. The result is an enthralling book. John Sampson was an eminent philologist who developed a passionate interest in gypsies and compiled the standard Romani dictionary. He was also passionate in other ways. Drawings by Augustus John, who was a close friend, help to illustrate the text.

Alan Maclean's unassuming but subtle memoir No, I Tell a Lie, It was the Tuesday . . (Kyle Cathie, £16.99) is delightfully easy to read, though it includes accounts of two traumatic experiences the defection of his brother Donald, and being cured of alcoholism by an eccentric therapist, whom he rescues from apparent- ly undeserved oblivion.