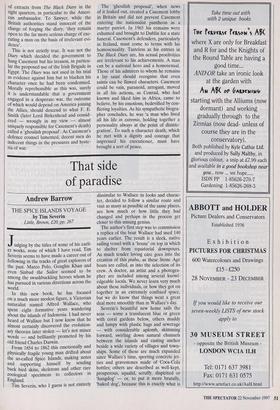 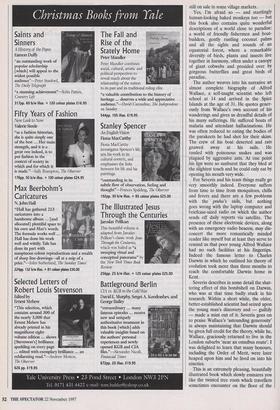 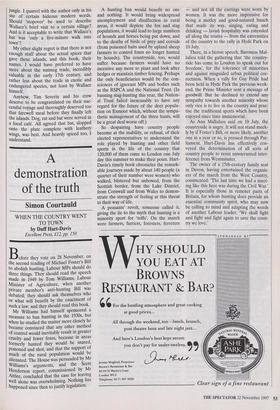 That side of paradise

THE SPICE ISLANDS VOYAGE by Tim Severin Little, Brown, £20, pp. 267 Judging by the titles of some of his earli- er works, none of which I have read, Tim Severin seems to have made a career out of following in the tracks of great explorers of the past. Marco Polo, Genghis Khan and even Sinbad the Sailor seemed to be among the swashbuckling heroes whom he has pursued in various directions across the world.

In this new book, he has focused on a much more modest figure, a Victorian naturalist named Alfred Wallace, who spent eight formative years wandering about the islands of Indonesia. I had never heard of Wallace but I now know that he almost certainly discovered the evolution- ary theories later stolen — let's not mince words — and brilliantly promoted by his old friend Charles Darwin.

From 1854 to 1862 this emotionally and physically fragile young man drifted about the so-called Spice Islands, making notes and supporting himself by sending back bird skins, skeletons and other rare zoological specimens to collectors in England. Tim Severin, who I guess is not entirely dissimilar to Wallace in looks and charac- ter, decided to follow a similar route and visit as many as possible of the same places, see how much or how little they had changed and perhaps in the process get closer to this unsung genius.

The author's first step was to commission a replica of the boat Wallace had used 140 years earlier. The result is a sleek, native sailing vessel with a 'house' on top in which to shelter from equatorial downpours. As much tender loving care goes into the creation of this prahu, as these Stone Age boats are called, as into the selection of its crew. A doctor, an artist and a photogra- pher are included among several knowl- edgeable locals. We never learn very much about these individuals, or how they got on together in an extremely confined space, but we do know that things went a great deal more smoothly than in Wallace's day.

Severin's beautiful new home sails the seas — some a translucent blue or green with coral gardens below, others muddy and lumpy with plastic bags and sewerage — with considerable aplomb, skimming forward, swirling down natural channels between the islands and casting anchor beside a wide variety of villages and town- ships. Some of these are much expanded since Wallace's time, sporting concrete jet- ties and gravestones made of Coca-Cola bottles; others are described as well-kept, prosperous, squalid, scruffy, dispirited or `hangdog' — or, to put it more brutally, `baked dog', because this is exactly what is still on sale in some village markets. Yes, I'm afraid so — and startlingly human-looking baked monkeys too — but this book also contains quite wonderful descriptions of a world close to paradise: a world of friendly fishermen and boat- builders, gently rustling coconut palms and all the sights and sounds of an equatorial forest, where a remarkable diversity of birds, plants and insects live together in harmony, often under a canopy of giant cobwebs and presided over by gorgeous butterflies and great birds of paradise.

The author weaves into his narrative an almost complete biography of Alfred Wallace, a self-taught scientist who left school at 14 and arrived in the Spice Islands at the age of 31. He quotes gener- ously from Wallace's own account of his wanderings and gives us dreadful details of his many sufferings. He suffered bouts of malaria and attendant hallucinations. He was often reduced to eating the bodies of the parakeets he had shot for their skins. The crew of his boat deserted and rats gnawed away at his sails. He tussled with poisonous snakes and was plagued by aggressive ants. At one point his lips were so sunburnt that they bled at the slightest touch and he could only eat by opening his mouth very wide.

For Severin and his team things really go very smoothly indeed. Everyone suffers from time to time from mosquitoes, chills and fevers and there are a few problems with the prahu's sails, but nothing goes wrong with the laptop computer and briefcase-sized radio on which the author sends off daily reports via satellite. The presence of these electronic devices, along with an emergency radio beacon, may dis- concert the more romantically minded reader like myself but at least they serve to remind us that poor young Alfred Wallace had no such facilities at his fingertips. Indeed the famous letter to Charles Darwin in which he outlined his theory of evolution took more than three months to reach the comfortable Darwin home in Kent.

Severin describes in some detail the shat- tering effect of this bombshell on Darwin, who was at that time badly stuck in his research. Within a short while, the older, better-established scientist had seized upon the young man's discovery and — guiltily — made a mint out of it. Severin goes on to praise Wallace's 'astounding generosity' in always maintaining that Darwin should be given full credit for the theory, while he, Wallace, graciously returned to live in the London suburbs 'near an omnibus route'. I was delighted to learn that many honours, including the Order of Merit, were later heaped upon him and he lived on into his nineties.

This is an extremely pleasing, beautifully illustrated book which slowly ensnares you like the twisted tree roots which travellers sometimes encounter on the floor of the jungle. I quarrel with the author only in his use of certain hideous modern words. Should 'stopover' be used to describe Wallace's brief visit to a certain village? And is it acceptable to write that Wallace's but was 'only a five-minute walk into town'?

My other slight regret is that there is not enough stuff about the actual spices that gave these islands, and this book, their names. I would have preferred to have more about the nutmeg trade, incredibly valuable in the early 17th century, and rather less about the trade in exotic and endangered species, not least by Wallace himself.

Anyhow, Tim Severin and his crew deserve to be congratulated on their suc- cessful voyage and thoroughly deserved too that farewell meal before they finally left the islands. Dog, rat and bat were served in a local café. All agreed that bat, slopped onto the plate complete with leathery wings, was best. And heavily spiced too, I understand.