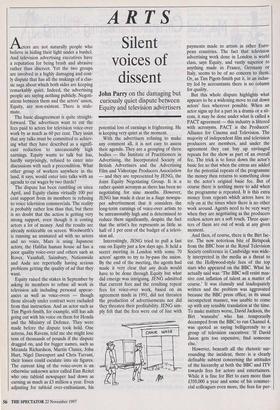 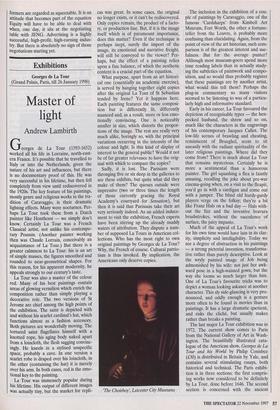 Actors are not naturally people who believe in hiding their light under a bushel. And television advertising executives have a reputation for being brash and abrasive rather than discreet. Yet the two groups are involved in a highly damaging and cost- ly dispute that has all the makings of a clas- sic saga about which both sides are keeping remarkably quiet. Indeed, the advertising people are saying nothing publicly. Negoti- ations between them and the actors' union, Equity, are non-existent. There is stale- mate.

The basic disagreement is quite straight- forward. The advertisers want to cut the fees paid to actors for television voice-over work by as much as 60 per cent. They insist that any talks must be committed to achiev- ing what they have described as a signifi- cant reduction to unreasonably high earnings. Equity wants to talk but has, hardly surprisingly, refused to enter into discussions with such a precondition. What other group of workers anywhere in the land, it says, would enter into talks with an agenda to cut wages by two thirds?

The dispute has been rumbling on since April, and Equity claims virtually 100 per cent support from its members in refusing to voice television commercials. The reality is probably rather less than that, but there is no doubt that the action is getting very strong support, even though it is costing actors a lot of money. And the results are already noticeable on screen. Woolworth's is running an animated ad with no actors and no voice, Mars is using Japanese actors, the Halifax human house ad has a poor quality voice-over and others such as Rover, Vauxhall, Sainsbury, Nationwide and Asda are reportedly having serious problems getting the quality of ad that they want.

Equity raised the stakes in September by asking its members to refuse all work in television ads including personal appear- ances as well as voice-overs — though those already under contract were excluded from that instruction. And an actor such as Tim Pigott-Smith, for example, still has ads going out with his voice on them for Honda and the Ministry of Defence. They were made before the dispute took hold. One actress, Jan Ravens, told me she might lose tens of thousands of pounds if the dispute dragged on, and for bigger names, such as Miranda Richardson, Martin Clunes, John Hurt, Nigel Davenport and Chris Tarrant, their losses could escalate into six figures. The current king of the voice-overs is an otherwise unknown actor called Enn Reitel who one tabloid newspaper had down as earning as much as £3 million a year. Even adjusting for tabloid over-enthusiasm, his potential loss of earnings is frightening. He is keeping very quiet at the moment.

With the advertisers refusing to make any comment all, it is not easy to assess their agenda. They are a grouping of three bodies — the Institute of Practitioners in Advertising, the Incorporated Society of British Advertisers and the Advertising Film and Videotape Producers Association — and they are represented by JENG, the Joint Equity Negotiating Group. It is a rather quaint acronym as there has been no negotiating for nine months. However, JENG has made it clear in a Stage newspa- per advertisement that it considers the long-term earnings of voice-over artists to be unreasonably high and is determined to reduce them significantly, despite the fact that the artist's fee represents as little as half of 1 per cent of the budget of a televi- sion ad.

Interestingly, JENG tried to pull a fast one on Equity just a few days ago. It held a secret meeting in London with some 70 actors' agents to try to by-pass the union. By the end of the meeting, the agents had made it very clear that any deals would have to be done through Equity but what did emerge was intriguing. JENG admitted that current fees and the resulting repeat fees for voice-over work, based on an agreement made in 1991, did not threaten the production of advertisements nor did they threaten their profitability. JENG sim- ply felt that the fees were out of line with payments made to artists in other Euro- pean countries. The fact that television advertising work done in London is world class, says Equity, and vastly superior to anything made in France, Germany or Italy, seems to be of no concern to them. Or, as Tim Pigott-Smith put it, in an indus- try led by accountants there is no column for quality.

But this whole dispute highlights what appears to be a widening move to cut down actors' fees wherever possible. When an actor signs up for a part in a drama or a sit- com, it may be done under what is called a PACT agreement — this industry is littered with acronyms. PACT is the Producers' Alliance for Cinema and Television. The majority of independent film and television producers are members, and under the agreement they can buy up envisaged repeats for the show as part of an overall fee. The trick is to force down the actor's basic fee so that when the extras are added for the potential repeats of the programme the money then returns to something close to the actor's original basic fee. But of course there is nothing more to add when the programme is repeated. It is this extra money from repeats which actors have to rely on at the times when there is no other work around. Agents need to be very wary when they are negotiating as the producers reckon actors are a soft touch. Three quar- ters of them are out of work at any given moment.

And then, of course, there is the Birt fac- tor. The now notorious bite of Birtspeak from the BBC boss at the Royal Television Society conference in Cambridge was wide- ly interpreted in the media as a threat to cut the Hollywood-style fees of the top stars who appeared on the BBC. What he actually said was: 'The BBC will resist mas- sive cost inflation of talent as a matter of course.' It was clumsily and inadequately written and the problem was aggravated because the BBC press office, in its usual incompetent manner, was unable to come up with any sensible translation at the time. To make matters worse, David Jackson, the Birt `wannabe' who has temporarily decamped from the BBC to run Channel 4, was quoted as saying belligerently to a group of television executives: 'If David Jason gets too expensive, find someone else.'

However, beneath all the rhetoric sur- rounding the incident, there is a clearly definable subtext concerning the attitudes of the hierarchy at both the BBC and ITV towards fees for actors and entertainers. While it is fine for Birt to earn more than £350,000 a year and some of his commer- cial colleagues even more, the fees for per- formers are regarded as squeezable. It is an attitude that becomes part of the equation Equity will have to be able to deal with when, one day, it sits at the negotiating table with JENG. Advertising is a highly successful, high-profit, high-earning indus- try. But there is absolutely no sign of those negotiations starting yet.