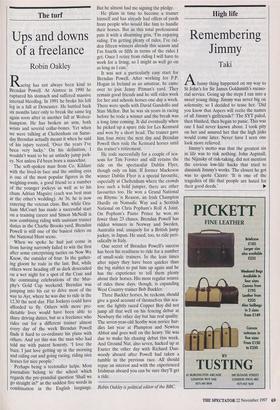 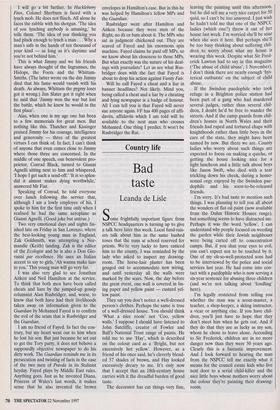 Afunny thing happened on my way to St John's for Sir James Goldsmith's memo- rial service. Going up the steps I ran into a sweet young thing. Jimmy was never big on solemnity, so I decided to tease her. Did you know that Aspers will recite the names of all Jimmy's girlfriends?' The SYT paled, then blushed, then began to panic. This was one I had never known about. I took pity on her and assured her that the high jinks would come later. Never have I seen one look more relieved.

Jimmy's motto was that the greatest sin in life was to risk nothing. John Aspinall, the Nijinsky of risk-taking, did not mention the envious low-life hacks that tried to diminish Jimmy's works. The closest he got was to quote Cicero: 'It is one of the tragedies of life that people are hated for their good deeds.' ■ I will go a bit further. In Huckleberry Finn, Colonel Sherburn is faced with a lynch mob. He does not flinch. All alone he faces the rabble with his shotgun. 'The idea of you lynching anybody is amusing,' he tells them. 'The idea of you thinking you had pluck enough to lynch a man . .. Why a man's safe in the hands of ten thousand of your kind — as long as it's daytime and you're not behind him.'

This is what Jimmy and we his friends have always thought of the Ingramses, the Hislops, the Foots and the Whittam- Smiths. (The latter wrote on the day Jimmy died that his fame would vanish with his death. As always, Whittam the pygmy loser got it wrong.) Jim Slater got it right when he said that 'Jimmy won the war but lost the battle, which he knew he would in the first place'.

Alas, when one is my age one has been to a few memorials for great men. But nothing like this. Thatcher and Kissinger praised Jimmy for his courage, intelligence and generosity — three of the greatest virtues I can think of. In fact, I can't think of anyone that even comes close to Jimmy where those three are concerned. In the middle of one speech, our benevolent pro- prietor, Conrad Black, turned to Gianni Agnelli sitting next to him and whispered, `I hope I get such a send-off.' It is so splen- did it almost makes dying worthwhile,' answered Mr Fiat.

Speaking of Conrad, he told everyone over lunch following the service that, although I am a lowly employee of his, I spoke to him for the first time only when I realised he had the same aeroplane as Gianni Agnelli. (Good joke but untrue.) Two very emotional days and nights fin- ished late on Friday in San Lorenzo, where the best-looking young man in England, Zak Goldsmith, was attempting a Nor- mandie (Keith) landing. Zak is the editor of the Ecologist and he is also a Don Gio- vanni par excellence. He uses an Italian accent to say to girls, `Ah wanna make laav to you.' This young man will go very far.

I was also very glad to see Jonathan Aitken and Neil Hamilton at the service. To think that both men have been called cheats and liars by the jumped-up gossip columnist Alan Rusbridger, and, worse, to know that both have had their livelihoods taken away on information given to the Guardian by Mohamed Fayed is to confirm the evil of the scum that is Rusbridger and the Guardian.

I am no friend of Fayed. In fact the con- trary, but my heart went out to him when he lost his son. But just because he set out to get the Tory party, it does not behove a supposedly objective newspaper to do his dirty work. The Guardian reminds me in its persecution and twisting of facts in the case of the two men of Pravda in its Stalinist heyday. Fayed plays by Middle East rules. Anything goes. Just as he invented Diana, Princess of Wales's last words, it makes sense that he also invented the • brown envelopes in Hamilton's case. But in this he was helped by Hamilton's fellow MPs and the Guardian.

Rusbridger went after Hamilton and Aitken because they were men of the Right, no ifs or buts about it. The MPs who sat in judgment chickened out. They are scared of Fayed and his enormous spin machine. Fayed claims he paid off MPs, so we know about his closeness to those MPs. But what exactly was the nature of his deal- ings with journalists? Let us see what Rus- bridger does with the fact that Fayed is about to drop his action against Vanity Fair.

Will he call Fayed a cheat and a liar in banner headlines? Not likely. Mind you, being called a cheat and a liar by a cheating and lying newspaper is a badge of honour. All I can tell you is that Fayed will never sue anyone again. VF has 400 pages of affi- davits, affidavits which I am told will be available to the next man who crosses Mohamed. One thing I predict. It won't be Rusbridger the Rat.