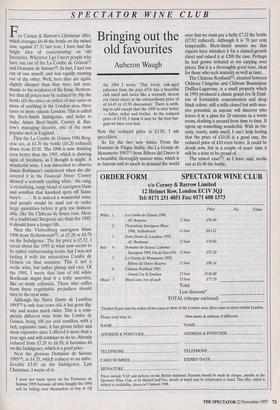 Bringing out the old favourites

For Corney & Barrow's Christmas offer, which averages £6.48 the bottle on the mixed case, against £7.32 last year, I have had the bright idea of concentrating on old favourites. Wherever I go I meet people who have run out of the La Combe de Grinou(1) and Domaine de Saissac(4). In fact, I had run out of one myself, and was rapidly running out of the other. Well, here they are again, slightly cheaper than they were last year, thanks to the weakness of the franc. Remem- ber that all prices may be reduced by 50p the bottle (£6 the case) on orders of two cases or more of anything in the London area, three cases or more outside London. This is called the Brett-Smith Indulgence, and helps to make Adam Brett-Smith, Corney & Bar- row's managing director, one of the most popular men in England.

First the La Combe de Grinou 1996 Berg- erac sec, at £4.70 the bottle (£4.20 reduced) down from £5.05. The 1996 is now drinking even better than the 1995, which is showing signs of tiredness, as I thought it might. A wonderful wine. I was interested to observe Jancis Robinson's excitement when she dis- covered it in the Financial Times: `Corney showed a seriously exciting white,' she sang, `a revitalising, tangy blend of sauvignon blanc and semillon that knocked spots off Sains- bury's . . . '. It is indeed a wonderful wine, and people would be mad not to order large quantities before it gets too fashion- able, like the Château de Sours rosé. More of a traditional Bergerac sec than the 1995, it should have a longer life.

Next the Vlottenburg sauvignon blanc 1996 from Stellenbosch(2), at £5.28 or £4.70 on the Indulgence. The list price is £5.52. I raved about the 1995 in what now seems to be rather embarrassing terms, but I was not tasting it with the miraculous Combe de Grinou on that occasion. This is not a svelte wine, but rather plump and racy. Of the 1995, I wrote that fans of old white Bordeaux might find it a trifle assertive, like so many colonials. Those who suffer from these regrettable prejudices should turn to the next wine.

Although the Notre Dame de Landiras 1993(3) is only four years old, it has great dig- nity and seems much older. This is a com- pletely different wine from the Combe de Grinou, being 100 per cent semillon, with a rich, expensive taste; it has grown richer and more expensive since I offered it more than a year ago, and will continue to do so. Already reduced from £7.29 to £6.50, it becomes £6 on the Indulgence, which is a good price.

I must not waste space on the Domaine de Saissac 1995 because all who bought the 1994 will be falling over themselves to buy it. Of the 1994 I wrote: 'This lovely, oak-aged cabernet from the pays d'Oc has a beautiful rich smell and tastes like a seriously decent cru classe claret at the extraordinary price of of £4.45 or £3.95 discounted.' There is noth- ing to add except that the 1995 is ever better — fuller, richer and livelier. At the reduced price of £3.95, I think it may be the best bar- gain we have ever had.

So for the two new wines. From the Dominio de Pingus Stable, the La Granja de Monasterio 1992(5) from Ribera del Duero is a beautiful, thoroughly mature wine, which is so famous and so much in demand the world over that we must pay a hefty £7.52 the bottle (£7.02 reduced). Although it is 70 per cent tempranillo, Brett-Smith assures me that experts have mistaken it for a classed-growth claret and valued it at £200 the case. Perhaps he had grown irritated at my carping over prices. But it is a thoroughly good wine, ideal for those who seek maturity as well as taste.

The Château Roylland(6), situated between Château l'Angelus and Château Beausejour Duffau-Lagarosse, is a small property which in 1993 produced a classic grand cru St Emil- ion of formidable concentration and deep black colour, still a trifle closed but with mas- sive potential, as anyone will discover who leaves it in a glass for 20 minutes in a warm room, sloshing it around from time to time. It opens up something wonderful. With its bis- cuity, toasty, nutty smell, I can't help feeling that the price of £10.50 is a good one, the reduced price of £10 even better. It could be drunk now, but in a couple of years' time it will be a wine to be proud of.