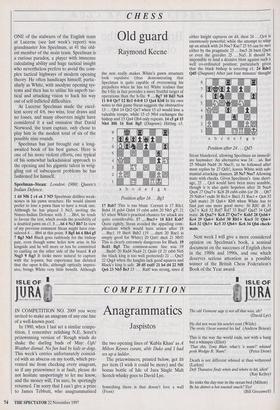 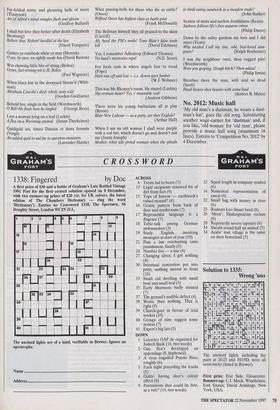 IN COMPETITION NO. 2009 you were invited to make an anagram of any one line of a well-known poet.

In 1980, when I last set a similar compe- tition, I remember relishing N.E. Soret's prizewinning version of 'Rough winds do shake the darling buds of May: Ugh! Weather dismal. No fun had by kids or dogs. This week's entries unfortunately coincid- ed with an abscess on my tooth, which pre- vented me from checking every anagram, so if any prizewinner is at fault, please do not hesitate unsportingly to let me know, and the money will, I'm sure, be sportingly returned. I'm sorry that I can't give a prize to James Tebbutt, who anagrammatised the two opening lines of `Kubla Khan' as A Milton Keynes curate, able Duke and I had sex up a ladder.

The prizewinners, printed below, get £6 per item (I wish it could be more) and the bonus bottle of Isle of Jura Single Malt Scotch whisky goes to David Lye.

Something there is that doesn't love a wall (Frost)

The old Vermont sage is not all that wise, eh?

(Ray Kelley) So sinks the day-star in the ocean bed (Milton) Be his dinner a hot toasted snack? Yes!

0 yes, be sure, we rightly made hay (David Barton)

I am a woman lying on a leaf (Larkin)

A flea on a Wyoming animal (Susan Therkelsen)

(Andrew Gibbons) There were his young barbarians all at play (Byron) Blair New Labour — as a party, are they English?

(Arthur Hall) When I am an old woman I shall wear purple with a red hat, which doesn't go and doesn't suit me (Jenny Joseph) Mother, what ails proud woman when she pleads to thrill eating sandwich in a meadow nude?

(John Barker) Season of mists and mellow fruitfulness (Keats) Sadness follows life's first autumn omen (Philip Dacre) Down by the salley gardens my love and I did meet (Yeats) Why needed I sell my tiny, odd, best-loved ana-

I was thy neighbour once, thou rugged pile! (Wordsworth) Were you groping Slough bitch? Then adieu!

(Philip Irwin) Breathes there the man, with soul so dead (Scott) Head hunter shot beaters with some lead (Robert B. Myles)