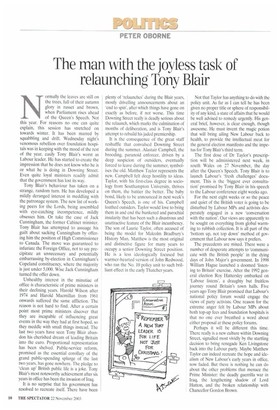 Page 10, 22 November 2003 — The man with the joyless task of relaunching Tony Blair
Close

The man with the joyless task of relaunching Tony Blair

Normally the leaves are still on the trees, full of their autumn glory in russet and brown, when Parliament rises ahead of the Queen's Speech. Not this year. For reasons no one can quite explain, this session has stretched on towards winter. It has been marred by squabbling and drift. Wednesday night's venomous rebellion over foundation hospitals was in keeping with the mood of the rest of the year, easily Tony Blair's worst as Labour leader. He has started to create the impression that he does not know who he is or what he is doing in Downing Street. Even quite loyal ministers readily admit that the government has lost its way.

Tony Blair's behaviour has taken on a strange, random turn. He has developed a mildly deranged interest in meddling with the patronage system. The new list of working peers for the Lords, being assembled with eye-catching incompetence, mildly obsesses him. Or take the case of Jack Cunningham, the former Cabinet minister. Tony Blair has attempted to assuage his guilt about sacking Cunningham by offering him the position of High Commissioner to Canada. The move was guaranteed to infuriate the Foreign Office, not to say precipitate an unnecessary and potentially embarrassing by-election in Cunningham's Copeland constituency, where the majority is just under 5,000. Wise Jack Cunningham turned the offer down.

Unhealthy interest in the minutiae of office is characteristic of prime ministers in their declining years. Harold Wilson after 1974 and Harold Macmillan from 1961 onwards suffered the same affliction. The reason is not hard to find. After a certain point most prime ministers discover that they are incapable of influencing great events in the way they had at first hoped, so they meddle with small things instead. The last two years have seen Tony Blair abandon his cherished dream of leading Britain into the euro. Proportional representation has been shelved. Public-service reform, promised as the essential corollary of the grand public-spending splurge of the last two years, has gone nowhere. The pledge to 'clean up' British public life is a joke. Tony Blair's most noteworthy achievement after six years in office has been the invasion of Iraq.

It is no surprise that his government has resolved to recreate itself. There have been plenty of 'relaunches' during the Blair years, mostly drivelling announcements about an 'end to spin', after which things have gone on exactly as before, if not worse. This time Downing Street really is deadly serious about the relaunch, which marks the culmination of months of deliberation, and is Tony Blair's attempt to rebuild his jaded premiership.

It is the consequence of the great staff reshuffle that convulsed Downing Street during the summer. Alastair Campbell, the brooding, paranoid enforcer, driven by a deep suspicion of outsiders, eventually forced to leave during the summer, symbolises the old. Matthew Taylor represents the new. Campbell felt deep hostility to ideas. Taylor, with his first-class degree in sociology from Southampton University, thrives on them, the battier the better. The baby bond, likely to be announced in next week's Queen's Speech, is one of his. Campbell loathed outsiders. Taylor would love to bring them in and end the bunkered and parochial insularity that has been such a disastrous and unattractive feature of the Blair incumbency. The son of Laurie Taylor, often accused of being the model for Malcolm Bradbury's History Man, Matthew is the most original and distinctive figure for many years to occupy a senior Downing Street position. He is a less ideologically focused but warmer-hearted version of John Redwood, who ran the No. 10 policy unit to such brilliant effect in the early Thatcher years. Not that Taylor has anything to do with the policy unit. As far as I can tell he has been given no proper title or sphere of responsibility of any kind, a state of affairs that he would be well advised to remedy urgently. His general brief, however, is clear enough, though awesome. He must invent the magic potion that will bring ailing New Labour back to health, to provide the intellectual meat for the general election manifesto and the impetus for Tony Blair's third term.

The first dose of Dr Taylor's prescription will be administered next week, in south Wales on 27 November, the day after the Queen's Speech. Tony Blair is to launch Labour's 'fresh challenges' document. This is the 'biggest ever consultation' promised by Tony Blair in his speech to the Labour conference eight weeks ago.

For the next eight weeks or so the peace and quiet of the British voter is going to be disturbed by Labour MPs and activists desperately engaged in a new 'conversation with the nation'. Our views are apparently to be sought on everything from global warming to rubbish collection. It is all part of the 'bottom up, not top down' method of government that Labour now says it prefers.

The precedents are mixed. There were a number of desperate attempts to 'communicate with the British people' in the dying days of John Major's government. In 1998 William Hague launched a doomed 'listening to Britain' exercise. After the 1992 general election Roy Hattersley embarked on 'Labour listens', a draughty but fruitless journey round Britain's town halls. Five years ago Tony Blair promised that Labour's national policy forum would engage the views of party activists. One reason for the extreme anger felt by Labour MPs about both top-up fees and foundation hospitals is that no one ever breathed a word about either proposal at these policy forums.

Perhaps it will be different this time. There really is a new culture within Downing Street, signalled most vividly by the startling decision to bring renegade Ken Livingstone back into the Labour party. Maybe Matthew Taylor can indeed recreate the hope and idealism of New Labour's early years in office, now faded. But there is nothing he can do about the other problems that menace the Prime Minister: the deadly guerrilla war in Iraq, the lengthening shadow of Lord Hutton, and the broken relationship with Chancellor Gordon Brown.