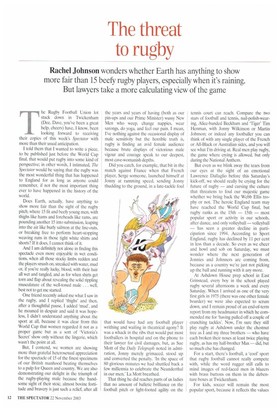 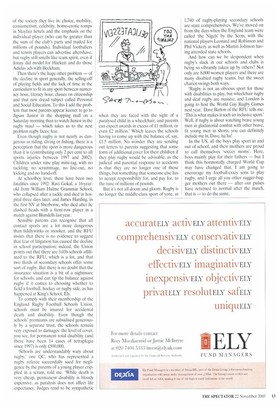 The threat to rugby

Rachel Johnson wonders whether Earth has anything to show more fair than 15 beefy rugby players, especially when it's raining. But lawyers take a more calculating view of the game

The Rugby Football Union lot stuck down in Twickenham (Dee, Dave, you've been a great help, cheers) have, I know, been looking forward to receiving their copies of this week's Spectator with more than their usual anticipation.

I told them that I wanted to write a piece, to be published just before the World Cup final, that would put rugby into some kind of perspective; in other words, I intimated, The Spectator would be saying that the rugby was the most wonderful thing that has happened to England for as long as anyone could remember, if not the most important thing ever to have happened in the history of the world.

Does Earth, actually, have anything to show more fair than the sight of the rugby pitch. where 15 fit and beefy young men, with thighs like hams and foreheads like rams, are pounding another 15 into submission, leaping into the air like burly salmon at the line-outs, or breaking free to perform heart-stopping weaving runs in those tight white shirts and shorts? If it does, I cannot think of it.

And I am definitely not alone in finding this spectacle even more enjoyable in wet conditions, when all those stocky limbs redden and the players smash on. streaked with water, mud or, if you're really lucky, blood, with their hair all wet and tangled, and as for when shirts get tom and flap about revealing the solid rippling musculature of the well-toned male . . . well, best not to get me started.

One friend recently asked me what I saw in the rugby, and I replied 'thighs' and then, after a thoughtful pause, I added 'mud', and he moaned in despair and said it was hopeless, I didn't understand anything about the sport at all, because it was clear from this World Cup that women regarded it not as a proper game but as a sort of 'Victoria's Secret' show only without the lingerie, which wasn't the point at all.

But, I contend, we women are showing more than grateful heterosexual appreciation for the spectacle of 15 of the finest specimens of our British manhood beating themselves to a pulp for Queen and country. We are also demonstrating our delight in the triumph of the rugby-playing male because the handsome sight of their stoic, almost bovine fortitude and bravery is just such a relief, after all

the years and years of having (both as our pin-ups and our Prime Minister) wussy New Men who weep, change nappies, wear sarongs, do yoga, and feel our pain. I mean, I've nothing against the occasional display of male sensitivity but the horrible truth is, rugby is finding an avid female audience because brute displays of victorious male vigour and courage speak to our deepest, most cave-womanish depths.

Did you catch, for example, that bit in the match against France when that French player, Serge someone, launched himself at Jonny at ramming speed, sending Jonny thudding to the ground, in a late-tackle foul that would have had any football player writhing and wailing in theatrical agony? It was a whack in the ribs that would put most footballers in hospital and on the phone to their lawyer for civil damages, but, as Sue Mott of the Daily Telegraph noted in admiration, Jonny merely grimaced, stood up and converted the penalty. 'In the space of 80 glorious minutes we had shuttled back a few millennia to celebrate the Neanderthal in our men.' La Mott breathed.

That thing he did reaches parts of us ladies that no amount of balletic brilliance on the football pitch or light-footed agility on the tennis court can reach. Compare the two stars of football and tennis, nail-polish-wearing, Alice-banded Beckham and 'Tiger' Tim Henman, with Jonny Wilkinson or Martin Johnson; or indeed any footballer you can think of with any single player of the French or All-Black or Australian sides, and you will see what I'm driving at. Real men play rugby, the game where crying is allowed, but only during the National Anthem.

But even as we blink away the tears from our eyes at the sight of an emotional Lawrence Dallaglio before this Saturday's kick-off, we should really be crying for the future of rugby — and cursing the culture that threatens to foul our majestic game whether we bring back the Webb Ellis trophy or not. The heroic England team may have reached the World Cup final, but rugby ranks as the 15th — 15th — most popular sport or activity in our schools, after dance, and only volleyball — volleyball — has seen a greater decline in participation since 1994. According to Sport England, rugby has declined by 11 per cent in less than a decade. So even as we cheer and howl and sob on Saturday, we must wonder where the next generation of Jonnies and Johnners are coming from, because as a country we're just not picking up the ball and running with it any more.

At Ashdown House prep school in East Grinstead, every boy in the school played rugby several afternoons a week and every Saturday. When I arrived as one of the very first girls in 1975 (there was one other female boarder) we were also expected to scrum down, and I remain proud of an end-of-term report from my headmaster in which he commended me for 'having pulled off a couple of crunching tackles'. Now, I'm sure they still play rugby at Ashdown under the chestnut tree as I and my three brothers — who have each broken their noses at least twice playing rugby, as has my half-brother Max — did, but so much else has changed.

For a start, there's football, a 'cool' sport that rugby football cannot really compete with, while the word rugger still calls to mind images of red-faced men in blazers with brass buttons on them in the debenture boxes at Twickenham.

For kids, soccer will remain the most popular sport, because it reflects the values of the society they live in: choice, mobility, consumerism, celebrity, homo-erotic romp: in Mayfair hotels and the emphasis on the individual player (who can be greater than the sum of the club's parts and traded for millions of pounds). Individual footballers and tennis players can advertise aftershave, but rugby still smells like team spirit, even if Jonny did model for Hackett and do those Adidas ads with Beckham.

Then there's the huge other problem — of the decline in sport generally, the selling-off of playing fields and the lack of time in the curriculum to fit in any sport between numeracy hour, literacy hour, classes on citizenship and that new dread subject called Personal and Social Education. To this I add the problem that most parents appear keener to go to Jigsaw Junior in the shopping mall on a Saturday morning than to watch Junior in the rugby maul — which takes us to the next problem rugby faces: fear.

Even though rugby is not nearly as dangerous as riding, diving or fishing, there is a perception that the sport is more dangerous than it is (contributing only 2 per cent to all sports injuries between 1997 and 2002). Children under nine play mini-tag, with no tackling, no scrummage, no line-out, no kicking and no hand-off.

At schoolboy level, there have been two fatalities since 1992: Ravi Gokal, a 16-yearold from William Hulme Grammar School, who collapsed after a tackle and died in hospital three days later, and James Harding, in the first XV at Sherborne, who died after he clashed heads with a front-row player in a match against Blundells last year.

Sensible parents can recognise that all contact sports are a lot more dangerous than tiddlywinks or snooker, and the RFU insists that there is no evidence to suggest that fear of litigation has caused the decline in school participation; indeed, the Union points out that there are 3,036 schools affiliated to the RFU, which is a lot, and that two thirds of secondary schools offer some sort of rugby. But there is no doubt that the insurance situation is a bit of a nightmare for schools, and can tip the balance against rugby if it comes to choosing whether to field a football, hockey or rugby side, as has happened at King's School, Ely.

To comply with their membership of the England Rugby Football Schools Union, schools must be insured for accidental death and disability. Even though the schools premiums are subsidised generously by a separate trust, the schools remain very exposed to damages: the level of cover, you see, for permanent total disability (and there have been 14 cases of tetraplegia since 1997) is only £500,000.

'Schools are understandably wary about rugby,' one QC, who has represented a rugby referee successfully sued for negligence by the parents of a young player crippled in a scrum, told me. 'While death is very cheap, permanent disability is bloody expensive, as paralysis does not affect life expectancy. Judges tend to be sympathetic when they are faced with the sight of a paralysed child in a wheelchair, and parents can expect awards in excess of £1 million, or even £2 million.' Which leaves the schools having to come up with the balance of, say, £1.5 million. No wonder they are sending out letters to parents suggesting that some form of additional cover for their children if they play rugby would be advisable, as the judicial and parental response to accidents is that they are no longer one of those things, but something that someone else has to accept responsibility for, and pay for, to the tune of millions of pounds.

But it's not all doom and gloom. Rugby is no longer the middle-class sport of yore, as 1,740 of rugby-playing secondary schools are state comprehensives. We've moved on from the days when the England team were called 'the Nigels' by the Scots, with the national players Leonard and Robinson and Phil Vickery as well as Martin Johnson having attended state schools.

And how can we be despondent when rugby's slack in our schools and clubs is being so vibrantly taken up by others? Not only are 8,000 women players and there are many disabled rugby teams, but the sweet chariot swings both ways.

'Rugby is not an obvious sport for those with disabilities to play, but wheelchair rugby and deaf rugby are massive, and London is going to host the World Gay Rugby Games next year.' Dave Barton of the RFU tells me. 'This is what makes it such an inclusive sport.' Well, if rugby is about watching brave young men in gladiatorial combat with other brave, fit young men in shorts, you can definitely include me in, Dave, ha ha!

In the US, all the boys play sport in and out of school, and their mothers are proud to call themselves 'soccer moms'. Here, boys mainly play for their fathers — but I think this hormonally charged World Cup may have changed that. I am going to encourage my football-crazy sons to play rugby, and I urge all you other rugger-bugger mothers out there — after our pulses have returned to normal after the match, that is — to do the same.