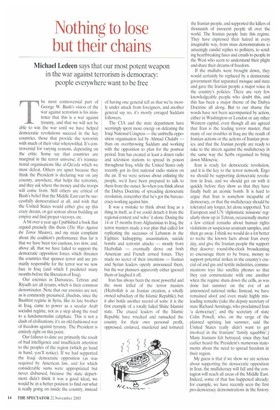 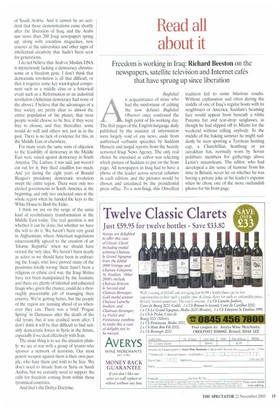 Nothing to lose but their chains

Michael Ledeen says that our most potent weapon in the war against terrorism is democracy: people everywhere want to be free The most controversial part of George W. Bush's vision of the war against terrorism is his insistence that this is a war against tyranny, and that we will not be able to win the war until we have helped democratic revolutions succeed in the key countries, those that provide the terrorists with much of their vital wherewithal. It's controversial for varying reasons, depending on the critic. Some say that countries are marginal in the terror universe; it's transnational organisations like al-Qa'eda which we must defeat. Others are upset because they think the President is declaring war on any country, anywhere, that helps the terrorists, and they ask where the money and the troops will come from. Still others are critical of Bush's belief that the Middle East can be successfully democratised at all, and wish that the United States would either give up this crazy dream, or get serious about building an empire and find proper viceroys, etc.

A bit over a year ago I published a book that argued precisely this thesis (The War Against the Tenor Masters), and my main complaint about the coalition's performance thus far is that we have been too cautious, too slow, and, above all, that we have failed to support the democratic opposition forces which threaten the countries that sponsor terror and are primarily responsible for the terror war we now face in Iraq (and which I predicted many months before the liberation of Iraq).

Our enemies in Damascus, Tehran and Riyadh are all tyrants, which is their common denominator. Note that our enemies are not, as is commonly presumed, jihadists, since the Baathist regime in Syria, like its late brother in Iraq, came to power as a secular Arab socialist regime. not as a step along the road to a fundamentalist caliphate. This is not a clash of civilisations; it's an old-fashioned war of freedom against tyranny. The President is entirely right on this point.

Our failures to date are primarily the result of bad intelligence and insufficient attention to the peoples of the region (which go hand in hand, you'll notice). If we had supported the Iraqi democratic opposition (as was required by American law, and for which considerable sums were appropriated but never disbursed, because the state department didn't think it was a good idea), we would be in a better position to find out what is really going on inside the country, instead of having one general tell us that we're mostly under attack from foreigners, and another general say no, it's mostly enraged Saddam followers.

The CIA and the state department have seemingly spent more energy on defeating the Iraqi National Congress — the umbrella opposition organisation led by Ahmad Chalabi — than on overthrowing Saddam and working with the opposition to plan for the postwar period. Iran has created at least a dozen radio and television stations to spread its poison throughout Iraq, while the United States only recently got its first national radio station on the air. If we were serious about enlisting the people, we'd have been prepared to talk to them from the outset. So when you think about the Dubya Doctrine of spreading democratic revolution, remember that he's got the bureaucracy working against him.

It was a mistake to think about Iraq as a thing in itself, as if we could detach it from the regional context and 'solve' it alone. During the 14 or 15 months from Afghanistan to Iraq, the terror masters made a war plan that called for replicating the successes of Lebanon in the Eighties: kidnapping, assassination, suicide bombs and terrorist attacks — mostly from Hezbollah — eventually drove out both American and French armed forces. They made no secret of their intentions — Iranian and Syrian leaders openly announced them, but the war planners apparently either ignored them or laughed it off.

Iran has always been the most powerful and the most lethal of the terror masters (Hezbollah is an Iranian creation, a wholly owned subsidiary of the Islamic Republic), but it also holds another record of sorts: it is the first example of a totally failed Shiite Islamist state. The crazed leaders of the Islamic Republic have wrecked and ransacked the country for their own personal profit, oppressed, enslaved, murdered and tortured the Iranian people, and supported the killers of thousands of innocent people all over the world. The Iranian people hate this regime. They have expressed their hatred in every imaginable way, from mass demonstrations to amazingly candid replies to pollsters, to sending heartbreaking faxes and emails to people in the West who seem to understand their plight and share their dreams of freedom.

If the mullahs were brought down, they would certainly be replaced by a democratic government that separated mosque and state and gave the Iranian people a major voice in the country's policies. There are very few knowledgeable people who doubt this, and this has been a major theme of the Dubya Doctrine all along. But to our shame the words have not been accompanied by action, either in Washington or London or any other Western capital, even though all are agreed that Iran is the leading terror master, that many of our troubles in Iraq are the result of Iranian actions or the actions of Iranian proxies, and that the Iranian people are ready to take to the streets against the mullahcracy in the same way the Serbs organised to bring down Milosevic.

Iran is ready for democratic revolution, and it is the key to the terror network. Ergo we should be supporting democratic revolution in Iran, and we should get on with it quickly before they show us that they have finally built an atomic bomb. It is hard to argue that Iran is somehow incapable of democracy, or that the mullahcracy should be tolerated any longer, let alone supported. Yet European and UN 'diplomatic missions' regularly show up in Tehran, occasionally mutter a few critical remarks about human rights violations or suspicious uranium samples, and then go away. I think we would do a lot better to recite the known facts about Iran every day, and give the Iranian people the support they deserve: round-the-clock broadcasting to encourage them to be brave, money to support potential strikes in the country's cmcial oil and gas and textile industries, communications toys like satellite phones so that they can communicate with one another when the regime shuts down the cells, as was done last summer on the eve of an announced national strike. Instead, we have remained aloof and even made highly misleading remarks (take the deputy secretary of state Richard Armitage, who proclaimed Iran 'a democracy'; and the secretary of state Colin Powell, who, on the verge of the planned uprising last summer, said the United States really didn't want to get involved in the Iranians' family squabble'.) Many Iranians felt betrayed, since they had earlier heard the President's numerous statements about the need to spread freedom in their region.

My guess is that if we show we are serious about supporting the democratic opposition in Iran, the mullahcracy will fall and the contagion will reach all areas of the Middle East. Indeed, some of that has happened already; for example, we have recently seen the first pro-democracy demonstrations in the history of Saudi Arabia, And it cannot be an accident that those demonstrations came shortly after the liberation of Iraq, and the Arabs saw more than 200 Iraqi newspapers spring up, along with countless magazines, new courses at the universities and other signs of intellectual creativity that hadn't been seen for generations.

I do not believe that Arab or Muslim DNA is mysteriously lacking a democracy chromosome or a freedom gene. I don't think that democratic revolution is all that difficult, or that it requires some key sociological component such as a middle class or a historical event such as a Reformation or an industrial revolution (Athenian democracy had none of the above). I believe that the advantages of a free society are pretty clear to almost the entire population of the planet, that most people would choose to be free if they were free to choose, and that, thereafter, some would do well and others not, just as in the past. There is no lack of evidence for this, in the Middle East or elsewhere.

For many years the same sorts of objection to the feasibility of democracy in the Middle East were raised against democracy in South America. The Latinos, it was said, just weren't cut out for it; they liked caudillos too much. And yet during the eight years of Ronald Reagan's presidency democratic revolution swept the entire region. There were only two elected governments in South America at the beginning, and only two unelected ones in the whole region when he handed the keys to the White House to Bush the Elder.

I think we are on the verge of the same kind of revolutionary transformation in the Middle East today. The real question is not whether it can be done, but whether we have the will to do it. We haven't been very good in Afghanistan, where American negotiators unaccountably agreed to the creation of an 'Islamic Republic' when we should have vetoed the very idea. We haven't been nearly as active as we should have been in embracing the Iraqis, who have proved many of the pessimists totally wrong: there hasn't been a religious or ethnic civil war, the Iraqi Shiites have not been manipulated by the Iranians, and there are plenty of talented and educated Iraqis who, given the chance, could do a thoroughly presentable job of managing their country. We're getting better, hut the people of the region are running ahead of us whenever they can. There was a brief 'Prague Spring' in Damascus after the death of the old tyrant, but it was crushed soon after. I don't think it will be that difficult to find suitably democratic forces in Syria in the future, especially if we deal effectively with Iran.

The main thing is to see the situation plainly: we are at war with a group of tyrants who sponsor a network of terrorists. Our most potent weapon against them is their own people, who hate them and wish to be free. We don't need to invade Iran or Syria or Saudi Arabia. but we certainly need to support the calls for freedom coming from within those tyrannical countries.

And that's the Dubya Doctrine.