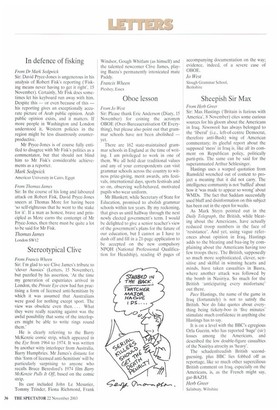 In defence of fisking

From Dr Mark Sedgwick Sir: David Pryce-Jones is ungenerous in his analysis of Robert Fisk's reporting (Fisking means never having to get it right', 15 November). Certainly, Mr Fisk does sometimes let his keyboard run away with him. Despite this — or even because of this — his reporting gives an exceptionally accurate picture of Arab public opinion. Arab public opinion exists, and it matters. If more people in Washington and London understood it, Western policies in the region might be less disastrously counterproductive.

Mr Pryce-Jones is of course fully entitled to disagree with Mr Fisk's politics as a commentator, but that should not blind him to Mr Fisk's considerable achievements as a reporter.

Sir: In the course of his long and laboured attack on Robert Fisk, David Pryce-Jones sneers at Thomas More for having been `so self-righteous that he went to the stake for it' If a man as honest, brave and principled as More earns the contempt of Mr Pryce-Jones, then there must be quite a lot to be said for Mr Fisk.