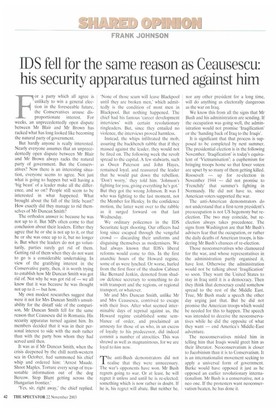 Page 42, 22 November 2003 — IDS fell for the same reason as Ceausescu: his security apparatus turned against him
Close

IDS fell for the same reason as Ceausescu: his security apparatus turned against him

F_ or a party which all agree is unlikely to win a general election in the foreseeable future, the Conservatives arouse disproportionate interest. For weeks, an unprecedentedly open dispute between Mr Blair and Mr Brown has racked what has long looked like becoming the natural party of government.

But hardly anyone is really interested. Nearly everyone assumes that an unprecedentedly open dispute between Mr Blair and Mr Brown always racks the natural party of government. But the Conservatives? Now there is an interesting situation, everyone seems to agree. Not just what is going to happen but will having a 'big beast' of a leader make all the difference, and so on? People still seem to be interested in what happened. What brought about the fall of the little beast? How exactly did they manage to rid themselves of Mr Duncan Smith?

The orthodox answer is: because he was not up to it. But MPs often come to that conclusion about their leaders. Either they agree that he or she is not up to it, or that he or she was once up to it, but no longer is. But when the leaders do not go voluntarily, parties rarely get rid of them. Getting rid of them when they do not want to go is a considerable undertaking. In view of the gratifying interest in the Conservative party, then, it is worth trying to establish how Mr Duncan Smith was got rid of. Not why he was got rid of — we all know that it was because he was thought not up to it — but how.

My own modest researches suggest that were it not for Mrs Duncan Smith's unsuitability for the distaff side of the comparison, Mr Duncan Smith fell for the same reason that Ceausescu did in Romania. His security apparatus turned against him. Its members decided that it was in their personal interest to side with the mob rather than with the party boss whom they had served until then.

It was as if Mr Duncan Smith, when the crisis deepened by the chill north-western sea in October, had summoned his chief whip and ordered him: 'Arrest Maude. Shoot Maples. Torture every scrap of treasonable information out of the dog Bercow. Stop Blunt getting across the Hungarian frontier.'

`Yes, sir, right away,' the chief replied. 'None of those scum will leave Blackpool until they are broken men,' which admittedly is the condition of most men in Blackpool. But nothing happened. The chief had his famous 'career development interviews' with certain revolutionary ringleaders. But, since they entailed no violence, the interviews proved harmless.

Instead, the whips infiltrated the mob. assuring the backbench rabble that if they massed against the leader, they would not be fired on. The following week the revolt spread to the capital. A few stalwarts, such as Owen Paterson and John Hayes, remained loyal, and reassured the leader that he would put down the rebellion. 'Don't worry,' they told him. 'Johnson's fighting for you, giving everything he's got.' But they got the wrong Johnson. It was I who was fighting to the last moment, not the Member for Henley. In the confidence motion, the latter went over to the rabble as it surged forward on that last Wednesday.

We ordinary policemen in the IDS Securitate kept shooting. Our officers had long since escaped through the vengeful crowd — discarding their uniforms and disguising themselves as modernisers. We had always known that IDS's liberal reforms would come to this. In the first anarchic hours of the Howard regime, some of us were lynched. Or worse, hurled from the first floor of the shadow Cabinet like Bernard Jenkin, demoted from shadow defence secretary to something to do with transport and the regions, or regional transport, or whatever.

Mr and Mrs Duncan Smith, unlike Mr and Mrs Ceausescu, contrived to escape with their lives. After what seemed interminable days of reprisal against us, the Howard regime established some semblance of order, and proclaimed an amnesty for those of us who, in an excess of loyalty to his predecessor, did indeed commit a number of atrocities. This was shrewd as well as magnanimous, for we are loyal to him now.

The anti-Bush demonstrators did not realise that they were unnecessary. The war's opponents have won. Mr Bush regrets going to war. Or at least, he will regret it unless and until he is re-elected; something which is now rather in doubt. If he is, his regret will abate. But neither he,

nor any other president for a long time, will do anything as electorally dangerous as the war on Iraq.

We know this from all the signs that Mr Bush and his administration are sending. If the occupation was going well, the administration would not promise `Iraqification' or the 'handing back of Iraq to the Iraqis'.

It is significant that that process is supposed to be completed by next summer. The presidential election is in the following November. graqification' is today's equivalent of Wietnamisation': a euphemism for bringing troops home so that fewer voters are upset by so many of them getting killed. Roosevelt — up for re-election in November 1944 — did not promise to Trenchify' that summer's fighting in Normandy. He did not have to, since American voters supported the war.

The anti-American demonstrators do not understand that a first-term president's preoccupation is not US hegemony but reelection. The two may coincide, but reelection always takes precedence. The signs from Washington are that Mr Bush's advisers fear that the occupation, or rather the daily deaths of American troops, is hindering Mr Bush's chances of re-election.

Those neoconsmatives who clamoured for the war, and whose representatives in the administration partly organised it, have lost. Otherwise the administration would not be talking about `Iraqification' so soon. They want the United States to stay in Iraq until it is a democracy. Then they think that democracy could somehow spread to the rest of the Middle East. True, Mr Bush made a speech the other day urging just that. But he did not promise the American troops which would be needed for this to happen. The speech was intended to deceive the neoconservatives while he did the opposite of what they want — end America's Middle-East adventure.

The neoconservatives misled him in telling him that Iraqis would greet him as their liberator. Neoconservatism is closer to Jacobinism than it is to Conservatism. It is an internationalist movement seeking to apply a universal form of government. Burke would have opposed it just as he opposed an earlier revolutionary internationalism. Mr Bush is a conservative, not a neo one. If the protesters want neoconservatism beaten, he has done it.