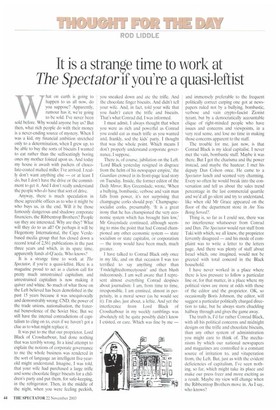 It is a strange time to work at

The Spectator if you're a quasi-leftist IA/. hat on earth is going to happen to us all now, do you suppose? Apparently, rumour has it, we're going to be sold. I've never been sold before. Why would anyone buy us? But then, what rich people do with their money is a never-ending source of mystery. When I was a kid, my financial ambition stretched only to a determination, when I grew up, to be able to buy the sorts of biscuits I wanted to eat rather than the suffocatingly boring ones my mother foisted upon us. And today my house is awash with packets of chocolate-coated malted milks: I've arrived. I really don't want anything else — or at least I do, but I don't have the drive or the commitment to get it. And I don't really understand the people who do have that sort of drive.

Anyway, there is much speculation in these agreeable offices as to who it might be who buys us, in the end. Will it be those famously dangerous and shadowy corporate financiers, the Ribbentrop Brothers? People say they are interested. Why are they? What will they do to us all? Or perhaps it will be Hegemony International, the Cape Verdebased media group that has closed down a record total of 2,561 publications in the past three years and which, in its spare time, apparently funds al-qaeda. Who knows?

It is a strange time to work at The Spectator, if you're a quasi-leftist. Here is a magazine proud to act as a clarion call for pretty much unrestrained capitalism, and unrestrained capitalism is now making it quiver and whine. So much of what those on the Left believed has been demolished in the past 15 years because it was unequivocally and demonstrably wrong: CND, the power of the trade unions, nationalisation, the fraternal benevolence of the Soviet bloc. But we still have the internal contradictions of capitalism to cling on to, even if we haven't got a clue as to what might replace it.

It was put to me that our proprietor. Lord Black of Crossharbour, had done nothing that was terribly wrong. In a kind attempt to explain the notions of corporate governance to me the whole business was rendered in the sort of language an intelligent five-yearold might understand. Imagine, I was told, that your wife had purchased a large trifle and some chocolate finger biscuits for a children's party and put them, for safe-keeping, in the refrigerator. Then, in the middle of the night, when you were feeling peckish, you sneaked down and ate the trifle. And the chocolate finger biscuits. And didn't tell your wife. And, in fact, told your wife that you hadn't eaten the trifle and biscuits. That's what Conrad did, I was informed.

I must admit, I always thought that when you were as rich and powerful as Conrad you could eat as much trifle as you wanted and, frankly, sod the kids' party. I thought that was the whole point. Which means I don't properly understand corporate governance. I suppose.

There is, of course, jubilation on the Left. 'Lord Black yesterday resigned in disgrace from the helm of his newspaper empire,' the Guardian crowed in its front-page lead story on Tuesday. Inside, the former editor of the Daily Mirror, Roy Greenslade, wrote, 'When a bullying, bombastic, verbose and vain man falls from power, it's not surprising that champagne corks should pop.' Champagnesocialist corks, presumably. 'It is a great irony that he has championed the very economic system which has brought him low,' Mr Greenslade continued, although seeming to miss the point that had Conrad championed any other economic system — state socialism or state capitalist, or corporatism — the irony would have been much, much greater.

I have talked to Conrad Black only once in my life, and on that occasion I was too terrified to say anything other than Tmdelightedtomeetyousie and then blush indecorously. I am well aware that I represent almost everything Conrad despises about journalism: I am, from time to time, irresponsible. I am enmired, almost in perpetuity, in a moral sewer (as he would see it). I'm also, just about, a leftie. And yet the interference from Lord Black of Crossharbour in my weekly ramblings was absolutely nil; he quite possibly didn't know I existed, or care. Which was fine by me — and immensely preferable to the frequent politically correct carping one got at newspapers ruled not by a bullying, bombastic, verbose and vain crypto-fascist Zionist tyrant, but by a democratically accountable clique of right-minded people who have issues and concerns and viewpoints, in a very real sense, and lose no time in making those concerns apparent to the staff.

The trouble for me, just now, is that Conrad Black is my ideal capitalist. I never met the vain, bombastic stuff. Maybe it was there. But I got the charisma and the power instead, and maybe the hauteur. I met his deputy Dan Colson once, He came to a Spectator lunch and seemed very charming. Every so often he would break into the conversation and tell us about the sales trend percentage in the last commercial quartile and we'd all go silent and try to understand, like when old Mr Grace appeared on the floor of the department store in Are You Being Served?.

Thing is, so far as I could see, there was no interference whatsoever from Conrad and Dan. The Spectator would run stuff from Taki with which, we all knew, the proprietor fervently disagreed — and his mode of complaint was to write a letter to the letters page. And there was plenty of stuff about Israel which, one imagined, would not be greeted with total concord in the Black household.

I have never worked in a place where there is less pressure to follow a particular line or, for that matter, in a place where my political views are more at odds with those of the editor and the proprietor. OK, so occasionally Boris Johnson, the editor, will suggest a particular politically charged direction to take, but he always starts chuckling halfway through and gives the game away.

The truth is, I'd far rather Conrad Black, with all his political concerns and midnight designs on the trifle and chocolate biscuits, than any other system of administration you might care to think of. The mechanisms by which our national newspapers and magazines are controlled is a constant source of irritation to, and vituperation from, the Left. But, just as with the evident deficiencies of capitalism, I've seen nothing, so far, which might take its place and make our press freer and more exciting as a result. Maybe my view will change when the Ribbentrop Brothers move in. As I say, who knows?