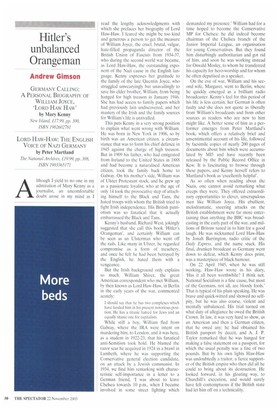 read the lengthy acknowledgments with which she prefaces her biography of Lord Haw-Haw. I feared she might be too kind and generous a person to get the measure of William Joyce, the cruel, brutal, vulgar, hate-filled propaganda director of the British Union of Fascists from 1934-37, who during the second world war became, as Lord Haw-Haw, the outstanding exponent of the Nazi cause in the English language. Kenny expresses her gratitude to the family of the late Quentin Joyce, who struggled unwearyingly but unavailingly to save his elder brother. William, from being hanged for high treason in January 1946. She has had access to family papers which had previously lain undiscovered, and her mastery of the Irish and the family sources for William's life is unrivalled.

This puts Kenny in a very strong position to explain what went wrong with William. He was born in New York in 1906, so by birth was an American citizen, a circumstance that was to form his chief defence in 1945 against the charge of high treason. But in 1909 his father, who had emigrated from Ireland to the United States in 1888 and had become a naturalised American citizen, took the family back home to Galway. On his mother's side, William was of Ulster Protestant stock, and he grew up as a passionate loyalist, who at the age of only 14 took the provocative step of attaching himself to the Black and Tans, the hated troops with whom the British tried to fight Irish independence. His British patriotism was so fanatical that it actually embarrassed the Black and Tans.

Kenny's husband, Richard West, jokingly suggested that she call this book 'Hitler's Orangeman', and certainly William can be seen as an Ulsterman who went off the rails. Like many in Ulster, he regarded compromise as a form of treachery, and once he felt he had been betrayed by the English, he hated them with a vengeance.

But the Irish background only explains so much. William Shirer, the great American correspondent who met William, by then known as Lord Haw-Haw, in Berlin in the early years of the war, commented acutely:

should say that he has two complexes which have landed him in his present notorious position. He has a titanic hatred for Jews and an equally titanic one for capitalists.

While still a boy, William fled from Galway, where the IRA were intent on murdering him, to London, and it was here, as a student in 1922-23, that his fanatical anti-Semitism took hold. He blamed the razor scar he acquired in 1924 in a brawl in Lambeth, where he was supporting the Conservative general election candidate, on an attack by a Jewish communist. In 1934, we find him remarking with characteristic self-importance in a letter to a German friend, 'I was about to leave Chelsea towards 10 p.m., when I became involved in some street fighting which

demanded my presence.' William had for a time hoped to become the Conservative MP for Chelsea: he did indeed become chairman of the Chelsea branch of the Junior Imperial League, an organisation for young Conservatives. But they found him disturbingly authoritarian and got rid of him, and soon he was working instead for Oswald Mosley, to whom he transferred his capacity for hero-worship and for whom he often deputised as a speaker.

On the eve of war, William and his second wife, Margaret, went to Berlin, where he quickly emerged as a brilliant radio broadcaster. Kenny's feel for this period of his life is less certain, her German is often faulty and she does not quote as liberally from William's broadcasts and from other sources as readers who are new to him might like. A better sense of him as a performer emerges from Peter Martland's book, which offers a relatively brief and unsentimental account of his life, followed by facsimile copies of nearly 200 pages of documents about him which were accumulated by MI5 and have recently been released by the Public Record Office in Kew. It is fascinating to browse through these papers. and Kenny herself refers to Martland's book as 'excellently helpful'.

As so often when reading about the Nazis, one cannot avoid remarking what creeps they were. They offered extraordinary opportunities to clever, unscrupulous men like William Joyce. His ebullient, melodramatic, sneering attacks on the British establishment were far more entertaining than anything the BBC was broadcasting in the early part of the war, and millions of Britons tuned in to him for a good laugh. He was nicknamed Lord Haw-Haw by Jonah Barrington, radio critic of the Daily &press, and the name stuck. His final, drunken broadcast as Germany went down to defeat, which Kenny does print, was a masterpiece of black humour.

On 22 April 1945, when he was still working, Haw-Haw wrote in his diary, 'Has it all been worthwhile? [think not. National Socialism is a fine cause, but most of the Germans, not all, are bloody fools.' That is typical of his plain speaking. He was brave and quick-witted and showed no selfpity, but he was also coarse, violent and mentally unbalanced. His trial turned on what duty of allegiance he owed the British Crown. In law, it was very hard to show, as an American and then a German citizen, that he owed any: he had obtained his British passport by deceit, and A. J. P. Taylor remarked that he was hanged for making a false statement on a passport, for which the usual penalty was a fine of two pounds. But by his own lights Haw-Haw was undoubtedly a traitor, a fierce supporter of the British empire who then did all he could to bring about its destruction. He looked forward, in his gloating way, to Churchill's execution, and would surely have felt contemptuous if the British state had let him off on a technicality.