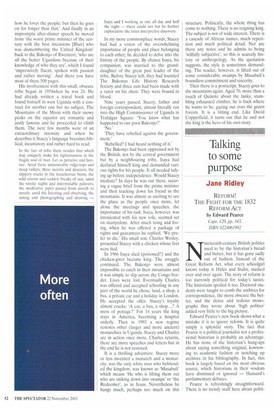 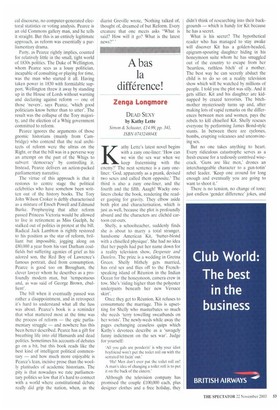 Talking to some purpose

REFORM! THE FIGHT FOR THE 1832 REFORM ACT by Edward Pearce Cape. £20, pp. 343, ISBN 0224061992 Nineteenth-century British politics used to be the historian's bread and butter, but it has gone sadly out of fashion. Instead of the Great Reform Act, what every schoolgirl knows today is Hitler and Stalin, studied over and over again. The story of reform is too narrowly political for today's tastes. The historians spoiled it too. Doctoral students were taught to comb the archives for correspondence, the more obscure the better, and the dense and tedious monographs they wrote about 'high politics' added very little to the big picture.

Edward Pearce's new book shows what a mistake it is to ignore reform. It is quite simply a splendid story. The fact that Pearce is a political journalist not a professional historian is probably an advantage. He has none of the historian's hang-ups about saying something original, kowtowing to academic fashion or notching up archives in his bibliography. In fact, this book is largely based on the most obvious source, which historians in their wisdom have dismissed or ignored — Hansard's parliamentary debates. Pearce is refreshingly straightforward. There is no trendy stuff here about politi cal discourse, no computer-generated electoral statistics or voting analysis. Pearce is an old Commons gallery man, and he tells it straight. But this is an entirely legitimate approach, as reform was essentially a parliamentary drama.

Party, as Pearce rightly implies, counted for relatively little in the small, tight world of 1830s politics. The Duke of Wellington, whom Pearce sees as a lousy politician, incapable of consulting or playing for time, was the man who started it all. Having taken power in 1830 with formidable support, Wellington threw it away by standing up in the House of Lords without warning and declaring against reform — one of those 'nevers', says Pearce, 'which good politicians know better than to utter'. The result was the collapse of the Tory majority, and the election of a Whig government committed to reform.

Pearce ignores the arguments of those gnomic historians (mainly from Cambridge) who contend that the real architects of reform were the ultras on the Right, or that the bill was in a perverse way an attempt on the part of the Whigs to subvert 'democracy' by controlling it. Instead, Pearce delivers an action-packed parliamentary narrative.

The virtue of this approach is that it restores to centre stage the political celebrities who have somehow been written out of the history books. The Tory John Wilson Croker is deftly characterised as a mixture of Enoch Powell and Edmund Burke. Prophesying that after reform passed Princess Victoria would be allowed to live in retirement as Miss Guelph, he stalked out of politics in protest at the bill. Radical Jack Lambton is rightly restored to his position as the star of reform, brilliant but impossible, jogging along on £801100 a year from his vast Durham coalfields but suffering agonies of grief as his adored son, the Red Boy of Lawrence's famous portrait, died from consumption. Pearce is good too on Brougham, the clever lawyer whom he describes as a profoundly modern man, but 'tempestuous and, as was said of George Brown, ebullient'.

The bill when it eventually passed was rather a disappointment, and in retrospect it's hard to understand what all the fuss was about. Pearce's book is a reminder that what mattered most at the time was the process of reform — the epic parliamentary struggle — and nowhere has this been better described. Pearce has a gift for breathing life into old Hansards and dead politics. Sometimes his accounts of debates go on a bit, but this book reads like the best kind of intelligent political commentary — and how much more enjoyable is Pearce's lean, incisive prose than the woolly platitudes of academic historians. The pity is that nowadays we rate parliamentary politics so low that it's hard to connect with a world where constitutional debate really did grip the nation, when, as the diarist Greville wrote, 'Nothing talked of, thought of, dreamed of but Reform. Every creature that one meets asks "What is said? How will it go? What is the latest news?"