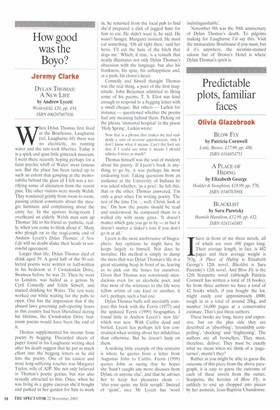 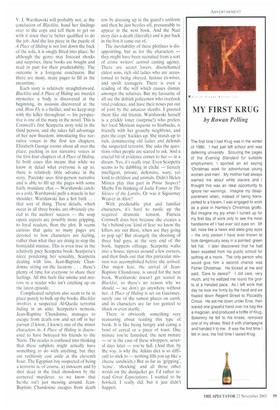 These books are long, heavy and expensive, but on the plus side they are described as 'absorbing', 'irresistibly compelling', 'shocking' and 'frightening'. The authors are all bestsellers. They must, therefore, deliver. They must be exactly what we mean when we think of a 'pageturner', mustn't they?

Rather as you might be able to guess the outcome of this piece from the above paragraph, it is easy to guess the outcome of each of these novels from the outset. Scarpetta, the heroine of Blow Fly, is unlikely to end up chopped into pieces by her nemesis, Jean-Baptiste Chandonne. V. I. Warshawski will probably not, at the conclusion of Blacklist, hand her findings over to the cops and tell them to get on with it since they're better qualified to do the job. And the last piece in the puzzle of A Place of Hiding is not lost down the back of the sofa, it is snugly fitted into place. So although the genre may forecast shocks and surprises, these books are bought and read in part for their predictability. The outcome is a foregone conclusion. But there are many, many pages to fill in the meantime.

Each story is relatively straightforward. Blacklist and A Place of Hiding are murder mysteries: a body is discovered at the beginning, its assassin discovered at the end. Blow Fly is a thriller, and we keep step with the killer throughout — his perspective is one of the many in the novel. This is Cornwell's first Scarpetta story told in the third person, and she takes full advantage of her new freedom, introducing five narrative voices in the first ten chapters. Elizabeth George zooms about all over the place, packing in ten narrative voices in the first four chapters of A Place of Hiding. In both cases this means that while we know in detail what everyone is up to, there is relatively little advance in the story. Paretsky uses first-person narrative and is able to fill up the pages with some fairly mundane chat — Warshaw-ski catches a cold. Warshawski pulls a muscle in her shoulder. Warshawski has a hot bath . . that sort of thing. These details, which occur in all three books, are obviously crucial to the authors' success — the soap opera aspects are possibly more gripping, to loyal readers, than the plot. It seems curious that quite so many pages are devoted to how characters are feeling, rather than what they are doing to stop the homicidal maniac. This is even true in the relatively pacy Scarpetta book: Scarpetta's niece pondering her sexuality, Scarpetta dealing with loss, Jean-Baptiste Chandonne sitting on the lavatory . . . there's plenty of time for everyone to share their feelings. All this feels like smoke and mirrors to a reader who isn't catching up on the latest episode.

Complicated subplots also seem to be in place purely to bulk up the books. Blacklist involves a suspected Al-Qaeda terrorist hiding in an attic; Scarpetta's nemesis, Jean-Baptiste Chandonne, manages to escape from death row and set off in her pursuit (I know, I know); one of the minor characters in A Place of Hiding is discovered to have betrayed his friends to the Nazis. The reader is confused into thinking that these subplots might actually have something to do with anything, but they are ruthlessly cast aside at the eleventh hour. The Egyptian boy suspected of being a terrorist is, of course, a) innocent and b) shot dead in the final showdown by the cornered murderer, so we know that he/she isn't just messing around. JeanBaptiste Chandonne escapes from death row by dressing up in the guard's uniform and then he just beetles off, presumably to appear in the next book. And the Nazi story dies a death (literally) and is put back in the box it came out of.

The inevitability of these plotlines is disappointing, but as for the characters — they might have been recruited from a sort of crime writers' central casting agency. There are secret lovers, disenchanted eldest sons, rich old ladies who are accustomed to being obeyed, furious ex-wives, and spoilt teenagers. There is even a reading of the will which causes dismay amongst the relatives. But my favourite of all are the doltish policemen who overlook vital evidence, and have their noses put out of joint by the amateur sleuths. I greeted them like old friends. Warshawski herself is a prickly loner (surprise!) who prefers her local Mexican taqueria to Starbucks, is friendly with her grouchy neighbour, and puts the cops' hackles up. She stands up to rich, domineering old ladies and defends the suspected terrorist. She asks the questions other people are scared to ask. And a crucial bit of evidence comes to her — in a dream. Yes, it's really true. Even Scarpetta seems to be dabbling in cliché — fiercely intelligent, private, defensive, wary, yet kind to children and animals. Didn't Helen Mirren play that part in Prime Suspect? Maybe I'm thinking of Jodie Foster in The Silence of the Lambs. Or was it Sigourney Weaver in Alien?

With predictable plot and familiar characters, it's hard to rustle up the required dramatic tension. Patricia Cornwell does best because she creates a 'he's behind you' kind of fear: we know the killers are out there, when are they going to pop up? But strangely the shooting of three bad guys, at the very end of the book, happens offstage. Scarpetta walks into a house, tiptoes around a few corners, and then finds out that this particular mission was accomplished before she arrived. Our major fear, the arrival of JeanBaptiste Chandonne, is saved for the next book. Warshawski doesn't get scared in Blacklist, so there's no reason why we should — we don't go anywhere without her. A Place of Hiding is set on Guernsey, surely one of the tamest places on earth, and its characters are far too genteel to shock or even startle.

There is obviously something very reassuring about reading this type of book. It is like being hungry and eating a bowl of cereal or a piece of toast. One minute you're famished, the next minute — or in the case of these whoppers, several days later — you're full. (And that, by the way, is why the Atkins diet is so difficult to stick to — nothing fills you up like a cheese sandwich.) But as far as 'gripping', 'tense', 'shocking' and all those other words on the dustjacket go, I'd rather reread Great Expectations. I wanted to be hooked. I really did, but it just didn't happen.