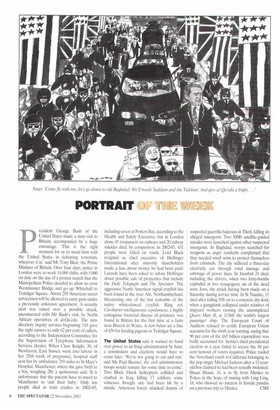 president George Bush of the United States made a state visit to Britain, accompanied by a huge entourage. 'This is the right moment for us to stand firm with the United States in defeating terrorism, wherever it is,' said Mr Tony Blair. the Prime Minister of Britain. Over four days, police in London were to work 14,000 shifts, with 5,000 on duty on the day of a protest march that the Metropolitan Police decided to allow to cross Westminster Bridge and go up Whitehall to Trafalgar Square. About 250 American secret servicemen will be allowed to cony guns under a previously unknown agreement. A security alert was raised over a possible attack, unconnected with Mr Bush's visit, by North African operatives of al-Qa'eda. The new directory inquiry services beginning 118 gave the right answer to only 62 per cent of callers, according to the Independent Committee for the Supervision of Telephone Information Services (Icstis). When Clare Knight. 30, of Newhaven, East Sussex, went into labour in her 25th week of pregnancy, hospital staff sent her by ambulance 250 miles to St Mary's Hospital, Manchester, where she gave birth to a boy, weighing 21b; a spokesman said: 'It is unfortunate that the parents have to travel to Manchester to visit their baby.' Only ten people died in train crashes in 2002-03, including seven at Potters Bar, according to the Health and Safety Executive, but in London alone 45 trespassers on railways and 20 railway suicides died; by comparison, in 2002-03, 431 people were killed on roads. Lord Black resigned as chief executive of Hollinger International after minority shareholders made a fuss about money he had been paid; Lazards have been asked to advise Hollinger about possible sale of properties that include the Daib: Telegraph and The Spectator. The aggressive North American signal crayfish has been found in the river Aln, Northumberland, threatening one of the last redoubts of the native white-clawed crayfish. Ring rot, Clavibacter michiganensis sepedonicus, a highly contagious bacterial disease of potatoes, was found in Britain for the first time at a farm near Brecon in Wales. A new bylaw set a fine of £50 for feeding pigeons in Trafalgar Square.

The United States said it wanted to hand over power to an Iraqi administration by June; a constitution and elections would have to come later. 'We're not going to cut and run.' said Mr Paul Bremer, the civil administrator; troops would remain 'for some time to come'. Two Black Hawk helicopters collided and crashed in Iraq, killing 17 soldiers; some witnesses thought one had been hit by a missile. American forces attacked dozens of suspected guerrilla hideouts in Tikrit, killing six alleged insurgents. Two 5001b satellite-guided missiles were launched against other suspected insurgents. In Baghdad, troops searched for weapons as angry residents complained that they needed small arms to protect themselves from criminals. The city suffered a three-day electricity cut through wind damage and sabotage of power lines. In Istanbul 24 died, including the drivers, when two lorry-bombs exploded at two synagogues; six of the dead were Jews, the attack having been made on a Saturday during service time. In St Nazaire, 15 died after falling 50ft on to a concrete dry dock when a gangplank collapsed under relatives of shipyard workers viewing the uncompleted Queen Mary II, at 1136ft the world's largest passenger ship. The European Court of Auditors refused to certify European Union accounts for the ninth year running, saying that 90 per cent of the £65 billion expenditure was badly accounted for. Serbia's third presidential election in a year failed to secure the 50 per cent turnout of voters required. Police raided the Neverland ranch in California belonging to the pop singer Michael Jackson after a 12-yearold boy claimed he had been sexually molested. Shuan Shuan, 16, is to fly from Mexico to Tokyo in the hope of mating with Ling Ling, 18, who showed no interest in female pandas

on a previous trip to Mexico. CSH