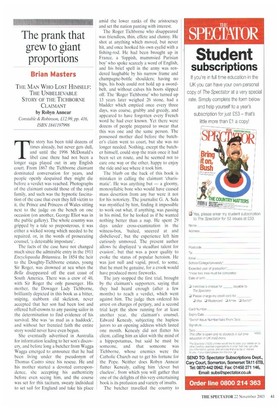 The prank that grew to giant proportions

THE MAN WHO LOST HIMSELF: THE UNBELIEVABLE STORY OF THE TICHBORNE CLAIMANT

The story has been told dozens of times already, but never gets dull, and until the 1996 McDonald's libel case there had not been a longer saga played out in any English court. From 1867 the Tichborne claimant dominated conversation for years, and people openly despaired they might die before a verdict was reached. Photographs of the claimant outsold those of the royal family, and such was the hypnotic fascination of the case that even they fell victim to it, the Prince and Princess of Wales sitting next to the judge on the bench on one occasion (on another, George Eliot was in the public gallery). The whole country was gripped by a tale so preposterous, it was either a wicked wrong which needed to be repaired, or, in the words of prosecuting counsel, 'a detestable imposture'.

The facts of the case have not changed much since the admirable entry in the 1911 Encyclopaedia Britannica. In 1854 the heir to the Doughty-Tichborne estates, young Sir Roger, was drowned at sea when the Bella disappeared off the east coast of South America. There was a crew of 40, with Sir Roger the only passenger. His mother, the Dowager Lady Tichborne, brilliantly depicted in this book as a bitter, sniping, stubborn old skeleton, never accepted that her son had been lost and offered half-crowns to any passing sailor in the determination to find evidence of his survival. She was 'as mad as a haddock', and without her frenzied faith the entire story would never have even begun.

She eventually advertised in Australia for information leading to her son's discovery, and before long a butcher from Wagga Wagga emerged to announce that he had been living under the pseudonym of Thomas Castro since his rescue. He and his mother started a devoted correspondence, she accepting his authenticity before even seeing him, and the course was set for this taciturn, sweaty individual to set sail for England and take his place amid the lower ranks of the aristocracy and set the nation panting with interest.

The Roger Tichborne who disappeared was friendless, thin, effete and clumsy. He shot at anything which moved, but never hit, and once hooked his own eyelid with a fishing-rod. He had been brought up in France, a 'foppish, mummsied Parisian boy' who spoke scarcely a word of English, and his brief spell in the army was rendered laughable by his narrow frame and champagne-bottle shoulders; having no hips, his body could not hold up a swordbelt, and without calves his boots slipped off. The 'Roger Tichborne' who turned up 13 years later weighed 26 stone, had a bladder which emptied once every three days, was coarse, grubby and greedy, and appeared to have forgotten every French word he had ever known. Yet there were dozens of people prepared to swear that this was one and the same person. The possessed mother died before the butcher's claim went to court, but she was no longer needed. Nothing, except the butcher himself, could stop the train once it had been set en route, and he seemed not to care one way or the other, happy to enjoy the ride and see where it took him.

The blurb on the back of this book is mistaken in calling the claimant 'charismatic'. He was anything but — a gloomy, monosyllabic bore who would have caused mass desertion from any bar were it not for his notoriety. The journalist G. A. Sala was mystified by him, finding it impossible to work out what, if anything, was passing in his mind, for he looked as if he wanted nothing better than a nap. He spent 29 days under cross-examination in the witness-box, 'baited, sneered at and disbelieved', but the experience left him curiously unmoved. The present author allows he displayed 'a steadfast talent for evasion', but that was a poor quality to evoke the status of popular heroism. He was just null and vapid, proof, to some, that he must be genuine, for a crook would have produced more fireworks.

The jury stopped the first trial, brought by the claimant's supporters, saying that they had heard enough (after a few months) to reach a verdict, which went against him. The judge then ordered his arrest on charges of perjury, and a second trial kept the show running for at least another year, the claimant's counsel, Edward Kenealy, subjecting the hapless jurors to an opening address which lasted one month. Kenealy did not flatter his client, calling him an idiot with the mind of a hippopotamus, but said he must be someone, and that someone was Tichborne, whose enemies were the Catholic Church out to get his fortune for the Pope. Neither does Robyn Annear flatter Kenealy, calling him 'clever hut clueless', from which you will gather that one of the delights of this very entertaining book is its profusion and variety of insults.

The butcher travelled the country to