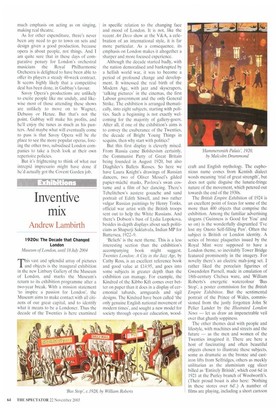 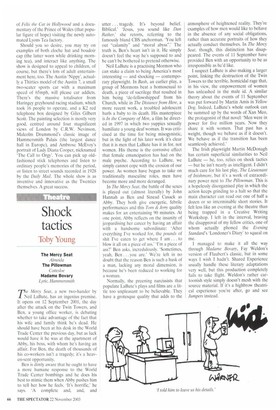 Tvast and splendid array of pictures 1 and objects is the inaugural exhibition in the new Linbury Gallery of the Museum of London, and marks the Museum's return to its exhibition programme after a two-year break. With a mission statement -to inspire a passion for London', the Museum aims to make contact with all citizens of our great capital, and to identify what it means to be a Londoner. Thus the decade of the Twenties is here examined

in specific relation to the changing face and mood of London. It is not, like the recent Art Deco show at the V&A, a celebration of an international style, it is far more particular. As a consequence, its emphasis on London makes it altogether a sharper and more focused experience.

Although the decade started badly, with the nation demoralised and bankrupted by a hellish world war, it was to become a period of profound change and development. It witnessed the real birth of the Modern Age, with jazz and skyscrapers, 'talking pictures' in the cinemas, the first Labour government and the only General Strike. The exhibition is arranged thematically, into eight subjects, starting with politics. Such a beginning is not exactly welcoming for the majority of gallery-goers. After all, if one of the exhibition's aims is to convey the exuberance of the Twenties, the decade of Bright Young Things in sequins, then why start with politics?

But this first display is cleverly mixed. From Russia came Bolshevism certainly, the Communist Party of Great Britain being founded in August 1920, but also Diaghilev's Ballets Russes. So here we have Laura Knight's drawings of Russian dancers, two of Oliver Messel's gilded papier-mâché masks, Pavlova's swan costume and a film of her dancing. There's Tchelitchew's austere gouache and sand portrait of Edith Sitwell, and two rather vulgar Russian paintings by Henry Tonks, official war artist with the British troops sent out to help the White Russians. And there's Dobson's bust of Lydia Lopokova, besides in-depth displays about such politicians as Shapurji Saklatvala, Indian MP for Battersea, 1922-9.

'Beliefs' is the next theme. This is a less interesting section than the exhibition's accompanying book might suggest. Twenties London: A City in the Jazz Age, by Cathy Ross, is an excellent reference book and good value at £14.95, and goes into some subjects in greater depth than the exhibition can manage. For example, the Kindred of the Kibbo Kift comes over better on paper than it does in a display of ceremonial tabards, armguards and sigil designs. The Kindred have been called 'the only genuine English national movement of modern times', and sought a new model for society through open-air education, wood craft and English mythology. The euphonious name comes from Kentish dialect words meaning 'trial of great strength', but does not quite disguise the lunatic-fringe nature of the movement, which petered out towards the end of the 1930s.

The British Empire Exhibition of 1924 is an excellent point of focus for some of the more than 400 objects that comprise the exhibition. Among the familiar advertising slogans (`Guinness is Good for You' and so on) is the wonderfully disgruntled 'I've lost my Onoto Self-filling Pen'. Often the subject is British or London identity. A series of bronze plaquettes issued by the Royal Mint were supposed to have a London theme, so inevitably Tower Bridge featured prominently in the imagery. For novelty there's an electric mah-jong set. I rather liked the porcelain figurines of Gwendolen Parnell, made in emulation of 18th-century Chelsea ware, and William Roberts's energetic watercolour 'Bus Stop', a poster commission for the British Empire Exhibition. But the sentimental portrait of the Prince of Wales, commissioned from the justly forgotten John St Pelier Lander by the Illustrated London News — let us draw an impenetrable veil over that ghastly soppiness.

The other themes deal with people and lifestyle, with machines and streets and the

future as the men and women of the Twenties imagined it. There are here a host of fascinating and often beautiful objects chosen to illustrate these subjects, some as dramatic as the bronze and castiron lifts from Selfridges, others as meekly utilitarian as the aluminium egg slicer billed as 'Entirely British', which cost 6d in 1921 at the Purley branch of Woolworth's. (Their proud boast is also here: 'Nothing in these stores over 6d..) A number of films are playing, including a short cartoon of Felix the Cat in Hollywood and a documentary of the Prince of Wales (that popular figure of hope) visiting the newly automated Lyons Tea factory.

Should you so desire, you may try on examples of both cloche hat and boudoir cap (the latter worn while drinking morning tea), and interact like anything. The show is designed to appeal to children, of course, but there's lots of adult entertainment here, too. The Austin 'Nippy', actually a Thirties model of the Austin 7, a small two-seater sports car with a maximum speed of 65mph, will please car addicts. There's the massive totalisator from Haringey greyhound racing stadium, which took 16 people to operate, and a 1(2 red telephone box designed by Giles Gilbert Scott. The painting selection is mostly very good, centred around four magnificent views of London by C.R.W. Nevinson, Malcolm Drummond's classic image of Hammersmith Palais (the largest dance hall in Europe), and Ambrose McEvoy's portrait of Lady Diana Cooper, nicknamed 'The Call to Orgy'. You can pick up oldfashioned stick telephones and listen to ordinary people's memories of the period, or listen to street sounds recorded in 1928 by the Daily Mail. The whole show is as inventive and innovative as the Twenties themselves. A great success.