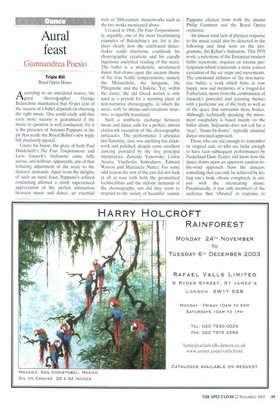 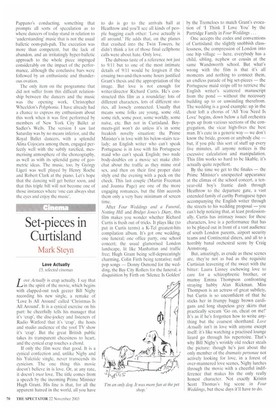 According to an anecdotal source, the

great choreographer George Balanchine maintained that 50 per cent of the success of a ballet depends on choosing the right music. One could easily add that even more success is guaranteed if the music in question is well conducted, for it is the presence of Antonio Pappano in the pit that made the Royal Ballet's new triple bill absolutely special.

Under his baton, the glory of both Paul Hindemith's The Four Temperaments and Leos Janacek's Sinfonietta came fully across, and without, apparently, any of that irritating adjustment of the score to the dancers' demands. Apart from the delights of such an aural feast, Pappano's refined conducting allowed a rarely experienced appreciation of the perfect interaction between music and dance, an essential trait of 20th-century masterworks such as the two works mentioned above.

Created in 1946, The Four Temperaments is, arguably, one of the most breathtaking examples of Balanchine's art. for it displays clearly how the celebrated dancemaker could intertwine seamlessly his choreographic creativity and his equally ingenious analytical reading of the score. The ballet is a modernist, neoclassical dance that draws upon the ancient theme of the four bodily temperaments, namely the Melancholic, the Sanguine, the Phlegmatic and the Choleric. Yet, within the dance, the old Greek notion is only used as a pretext for a stunning piece of non-narrative choreography, in which the score, with its theme-and-variations structure, is superbly translated.

Such a symbiotic exchange between music and dance calls for a perfect, almost clockwork execution of the choreographic intricacies. The performance I attended last Saturday, alas, was anything but clockwork and polished, despite some excellent dancing provided by the five principal interpreters, Zenaida Yanowsky, Carlos Acosta, Viacheslav Samodurov. Edward Watson and Marianela Nunez. For some odd reason the rest of the cast did not look at all at ease with both the geometrical technicalities and the stylistic demands of the choreography, nor did they seem to respond to the variety of beautiful sounds Pappano elicited from both the pianist Philip Gammon and the Royal Opera orchestra.

An almost total lack of physical response to the music could also be detected in the following and final item on the programme, Jiri Kylian's Sinfonietta. This 1978 work, a milestone of the European modern ballet repertoire, requires an intense participation which transcends a mere correct execution of the set steps and movements. The emotional richness of the non-narrative ballet, a work which hints at now happy, now sad memories of a longed-for Fatherland, stems from the combination of Janacek's powerful and yearning themes with a particular use of the body as well as of the space that surrounds those bodies. Although, technically speaking, the movement vocabulary is based mainly on the ballet idiom, Sinfonietta does not call for a 'neat', 'frame-by-frame'. typically classical dance-oriented approach.

Those who are old enough to remember its original cast, or who are lucky enough to have seen subsequent performances by Nederland Dans Teater, will know how the dance draws upon an apparent caution-tothe-wind approach from the dancers; something that can only be achieved by letting one's body vibrate completely in unison with the intoxicating music. Paradoxically, it was only members of the audience that 'vibrated' in response to Pappano's conducting, something that prompts all sorts of speculation as to where dancers of today stand in relation to 'understanding' music that is not the usual balletic oom-pah-pah. The execution was more than competent, but the lack of abandon, and an irritatingly hyper-balletic approach to the whole piece impinged considerably on the impact of the performance, although the conclusive bars were followed by an enthusiastic and thunderous ovation.

The only item on the programme that did not suffer from this difficult relationship between the dancers and the music was the opening work, Christopher Wheeldon's Polyphonia. 1 have already had a chance to express my enthusiasm about this work when it was first performed by members of New York City Ballet at Sadler's Wells, The version 1 saw last Saturday was by no means inferior, and the Royal Ballet dancers, with a splendid Alina Cojocaru among them, engaged perfectly well with the subtly rarefied, mesmerising atmosphere of the choreography, as well as with its splendid game of geometric ideas. The music, too, by Gyorgy Ligeti was well played by Henry Roche and Robert Clark at the piano. Let's hope that the dancing will get better soon, and that this triple bill will not become one of those instances where 'one can always shut the eyes and enjoy the music'.