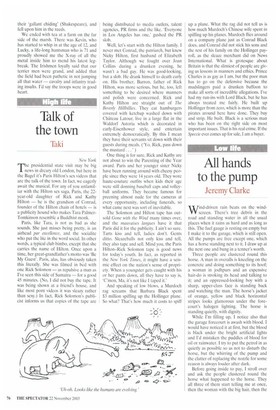 Talk of the town

Thepresidential state visit may be big news in dreary old London, but here in the Bagel it's Paris Hilton's sex videos that are the talk of the town. In fact, we eagerly await the musical. For any of you unfamiliar with the Hilton sex saga, Paris, the 22year-old daughter of Rick and Kathy Hilton — he is the grandson of Conrad, founder of the Hilton chain of hotels — is a publicity hound who makes Tara PalmerTomkinson resemble a Buddhist monk.

Paris. like Tara, is not as had as she sounds. She just misses being pretty, is an airhead par excellence, and the socialite who put the lite in the word social. In other words, a typical club bimbo, except that she carries the name of Hilton. Once upon a time, her great-grandfather's motto was 'Be My Guest'. Paris, alas, has obviously taken this literally. She was filmed in bed with one Rick Solomon — as repulsive a man as I've seen this side of Sumatra — for a good 45 minutes. (No, I did not buy the tape. It was being shown at a friend's house, and like most porn videos it was sleazy rather than sexy.) In fact, Rick Solomon's publicist informs us that copies of the tape are being distributed to media outlets, talent agencies, PR firms and the like. 'Everyone in Los Angeles has one,' gushed the PR slob, Well, let's start with the Hilton family. I never met Conrad, the patriarch, but knew Nicky Hilton, first husband of Elizabeth Taylor. Although we fought over Joan Collins during a drunken evening, he wasn't a bad guy. He was good-looking, but a slob. He drank himself to death early on. His brother, Barron, father of Rick Hilton, was more serious, but he, too, left something to be desired where manners and polish were concerned. Rick and Kathy Hilton are straight out of The Beverly Hillbillies. They eat hamburgers covered with ketchup washed down with Château Latour, live in a large flat in the Waldorf Astoria which is decorated in early-Eisenhower style, and entertain extremely democratically. By this I mean they have their servants sit down with their guests during meals. (`Yo, Rick, pass down the mustard .. . ' ) One thing is for sure, Rick and Kathy are not about to win the Parenting of the Year award. Paris and her younger sister Nicky have been running around with cheesy people since they were 14 years old. They wore haute-couture outfits when kids their age were still donning baseball caps and volleyball uniforms. They became famous for preening almost nude for the cameras at every opportunity, including funerals, so what came next was sort of inevitable.

The Solomon and Hilton tape has outsold Gone with the Wind many times over, and the mauvaises langues have it that Paris did it for the publicity. I ain't so sure. Tarts kiss and tell, ladies don't. Gents ditto. Sleazeballs not only kiss and tell, they also tape and sell. Mind you, the Paris Hilton-Rick Solomon tape is good news for today's youth. In fact, as reported in the New York Times, it might have a seismic effect on the nation's sense of propriety. When a youngster gets caught with his or her pants down, all they have to say is, 'C'mon, Ma, it's not like I taped it.'

And speaking of low blows. a Murdoch rag screams that Barbara Black spent $3 million spiffing up the Hollinger plane. So what? That's how much it costs to spiff up a plane. What the rag did not tell us is how much Murdoch's Chinese wife spent in spiffing up his planes. Murdoch flies around on a company plane just as Conrad Black does, and Conrad did not stick his sons and the rest of his family on the Hollinger payroll, as the sleaze merchant did on News International. What is grotesque about Britain is that the slimiest of people are giving us lessons in manners and ethics. Prince Charles is as gay as I am, but the poor man has to go on the defensive because the mudslingers paid a drunken buffoon to make all sorts of incredible allegations. I've had my run-ins with Lord Black, but he has always treated me fairly. He built up Hollinger from zero, which is more than the pirates around here have done. They buy and strip. He built. Black is a serious man who has been on the right side on most important issues. That is his real crime. If the Speccie ever comes up for sale, I am a buyer.