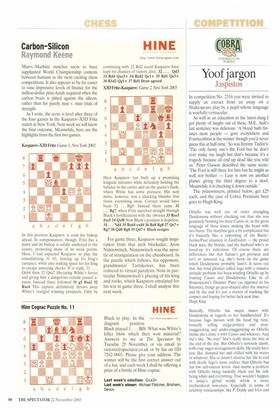 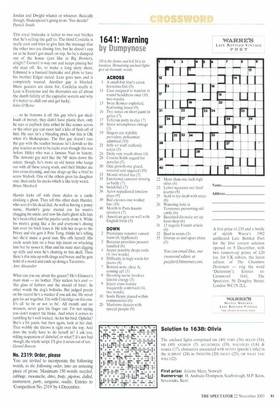 In competition No. 2316 you were invited to supply an extract from an essay on a Shakespeare play by a pupil whose language is woefully vernacular.

As well as an education in the latest slang I got plenty of laughs out of these. M.E. Ault's last sentence was delicious: 'A blood bath finishes most people — gore everywhere and Fourteenbra.s is the winner though you'd never guess this at half-time.' So was Jeremy Taylor's: 'The only funny one's the Fool but he don't ever make me laugh but that's because it's a tragedy because all end up dead like you told us.' Peter Gasson described the same scene: 'The Fool is still there for him but he might as well not bother — Lear is now on another planet, giving the third degree to a stool. Meanwhile it is chucking it down outside.'

The prizewinners, printed below, get 1.25 each, and the case of Cobra Premium beer goes to Hugh King.

Othello was well out of order strangling Desdemona without checking out that she was genuinely bonking his mate Cassio or, in the gross language of those times, making the beast with two bums. The storyline gets a bit complicated but its basically like a reworking of the Barry/Janine/Paul situation in EastEnders — the proud black man, the blonde, and the husband who's so loved-up it's ridiculous. Of course there are differences like that Janine's got previous and isn't so innocent e.g. she's been on the game which Desdemona probably hasn't. It turns out that this total plonker called Tag° with a massive attitude problem has been winding Othello up by framing Cassio and Desdemona. Like in all Shakespeare's Disaster Plays (as opposed to his Sitcoms), things go pear-shaped after the interval and by the end it's just a matter of stacking the corpses and hoping for better luck next time.

Basically, Othello has major issues with Desdemona in regards to her handkerchief. It's because Iago messes with his head big time, basically telling mega-porkies and overexaggerating and under-exaggerating so Othello thinks she's done it with Cassio and whoever. And she's like. 'No way!' She's really there for him at the end of the day. But Othello's seriously dumb, with crap anger-management skills. He could have just, like, dumped her and chilled with his mates or whatever. She so doesn't deserve her life to end with death. Iago's more craftier than Othello but has low self-esteem levels. And maybe a problem with Othello being basically black and his lady being white and everything. That wouldn't happen in today's global world, which is more multicultural nowadays. Especially in terms of celebrity relationships, like P. Diddy and J-Lo and

Jordan and Dwight whatsit or whoever. Basically though, Shakespeare's going to us: 'You decide!' Patrick Smith This royal fruitcake is father to two real bitches that he's selling the gaff to. The third Cordelia is really cool and tries to give him the message that the other two are dissing him, but he doesn't cop on as he hasn't got much on top. So he's dumped out of the house (just like in Big Brother), alright? Goneril is way out and keeps pissing her old man off. So, to make a long story short. Edmund is a bastard fruitcake and plots to have his brother Edgar outed. Lear goes nuts and is completely wasted. Another guy is blinded. More geezers are done for. Cordelia snuffs it. Lear is Everyone and the dramatics are all about the dumb futility of the capitalist system and why it's better to chill out and get lucky.

John O'Byrne . . . so he borrows it off this guy who's got shedloads of money. they didn't have plastic then, only he says at payback time either he like comes across or the other guy can razor half a kilo of flesh off of him. He says he's a bleeding prick, but this is OK when it's Shakespeare. The first guy doesn't rate the guy with the readies because he's Jewish so the play teaches us not to be racist even though this was before Hitler who was a famous Nazi in history. The Antonio guy isn't like the NF skins down the estate, though, he's more an old nonce who hangs out with all these young studs, and their bitches are into cross-dressing, and one drags up like a brief to screw Shylock. One of the others gives his daughter one, then nicks his ducks which is like truly weird. Brian Murdoch Hamlet kicks off with these dudes in a castle clocking a ghost. They tell this other dude Hamlet, who sees it's his dead dad. As well as having a poncy name, Hamlet's gone mental cos his mum's shagging his uncle, and now his dad's ghost tells him he's been offed and the psycho uncle done it. While his mum's going like a ho and everyone's dissing him even his bitch loses it. He tells her to go to the Priory and she gets it Pete Tong, thinks he's telling her she'd make a good nun. She offs herself. His uncle sends him on a boat trip intent on whacking him but he susses it, Him and his mate start digging up stiffs and soon he's chatting to this skull. Then there's this mix-up with drugs and booze and he gets hold of a sword and ends up doing a Tarantino.

Ann Alexander What can you say about the geezer? He's Elsinore's main man — no bother. They reckon he's cool — 'the glass of fashion and the mould of form'. In other words the dog's bollocks. But judged purely on his record he's a wanker if you ask me. He never gets his act together. I'm with Coleridge on this one. It's all 'to be or not to be'. All mouth and no trousers, never gets his finger out. I'm not saying you don't respect the bloke. And when it comes to rumbling he's well wicked. As for his bird, Ophelia? She's a bit pants, but then again, look at her dad. That wobbly she throws is right over the top. And does she really have to do herself in? I ask you, willing suspension of disbelief, or what?! It's not bad though, the whole script. I'll give it seven out of ten. Gerard Benson

No. 2319: Order, please You are invited to incorporate the following words, in the following order, into an amusing piece of prose. Maximum 150 words: nuzzled, cabbage, moustache, drive, fruity, pig-iron, dulled, instrument. patty, sanguine, nudity. Entries to 'Competition No. 2319' by 4 December.