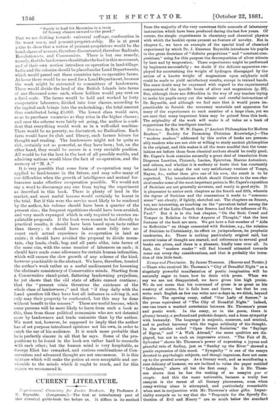 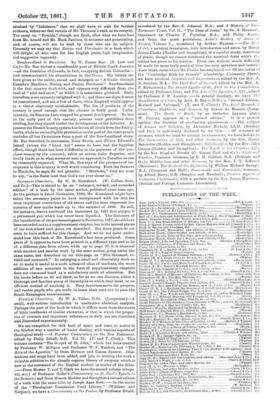 Essays and Phantasies. By James Thomson. (Reeves and Turner.) —Those

who received Mr. Thomson's " City of Dreadful Night" as a

singularly powerful manifestation of poetic imagination will be

naturally eager to learn bow he deals with prose. When we say we are not disappointed, we have given him high praise.

We do not mean that his command of prose is as great as his mastery of metre, for it fails here and there; bat that he can write each English as few can write now-a-days is, we think, beyond dispute. The opening essay, called " Oar Lady • of. Sorrow," is

the prose equivalent of " The City of Dreadful Night." Indeed, one can trace a marked correlation between Mr. Thomson's prose

and poetic work. In the essay, as in the poem, there is gloomy beauty, a profound and pathetic despair, and mitten sympathy with humanity. The -language is majestic, sonorous, and musical, and in perfect harmony with the vague sublimity of the thought.

In the articles called " Open Secret Societies," the "Sayings of Sigvat," and " A Walk Abroad," the same qualities are dis- played, but not to such an impressive extent. " The Fair of St.

Sylvester" shows Mr. Thomson's power of expressing a joyous and graceful vein of feeling, just as "Sunday up the River" showed a poetic expression of this mood. "Sympathy " is one of the essays devoted to psychologic subjects, and though ingenious, does not seem up to the general average. As a literary work, and as manifesting a rare delicacy of humour, we are inclined to value the paper entitled

" Indolence," above all but the first essay. In it Mr. Thom- son shows that he has the making of an essayist Nur et simple. And this the more noticeable, became a really fine

essayist is the rarest of all literary phenomena, even when essay-writing alone is attempted, and particularly remarkable when met in conjunction with Mr. Thomson's other gifts. Impar- tiality compels us to say that the " Proposals for the Speedy Ex- tinction of Evil and Misery " are so much below the standard

attained by " Indolence," that we shall have to wait for further evidence, before we feel certain of Mr. Thomson's rank as an essayist. The essay on " Bumble," though not fresh, after what we have had from Mr. Arnold and Mr. Mark Pattison, is accurate and penetrating, and, of course, will not be read by those who are its subject. Generally we may say that Essays and Phantasies is a book which will delight all who care for fine English prose, high imagination, and suggestive ingenuity.