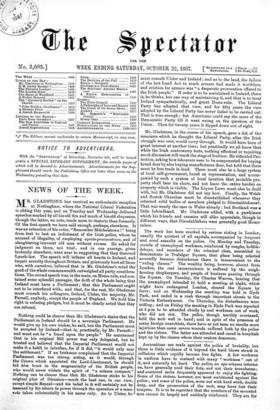 The week has been marked by serious rioting in London,

usually the quietest of all capitals, accompanied by frequent and cruel assaults on the police. On Monday and Tuesday, crowds of unemployed workmen, reinforced by roughs, hobble- dehoys, and members of the criminal class, assembled to demonstrate in Trafalgar Square, that place being selected avowedly because disturbance there is inconvenient to the "ruling classes." The wealthy being, however, absent from London, the real inconvenience is suffered by the neigh- bouring shopkeepers, and people of business passing through the Square. On Tuesday, Sir Charles Warren, hearing that the unemployed intended to hold a meeting at night, which might have endangered London, cleared the Square by force ; and on Wednesday the meeting was held in Hyde Park, and ended in a rush through important streets to the Victoria Embankment. On Thursday, the disturbances were trifling ; and on Friday the meeting in Hyde Park was reported at 4 p.m. to be attended chiefly by real workmen out of work, who did not riot. The police, though terribly overtaxed, held the mob well in hand ; and in spite of the presence of many foreign anarchists, there have as yet been no results more injurious than some severe wounds suffered both by the police and the rioters. The latter are attended and cured in hospitals kept up by the classes whom their orators denounce.