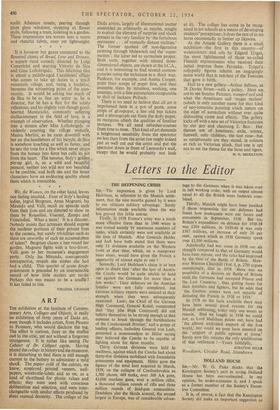 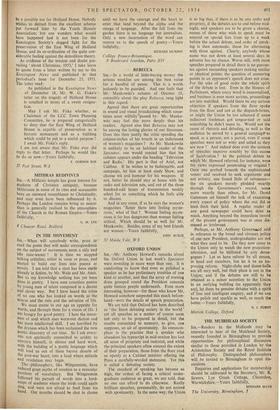 SIR,-Mr. W. G. Fiske thinks that chi Kensington Society's part in saving Holland House has been over-estimated. In my opinion, he under-estimates it, and I speak as a former member of the Society's Execu- tive Committee.

. It is, of course, a fact that the Kensington Society did make an important suggestion as

to a possible use for Holland House. Nobody Wishes to detract from the excellent scheme put forward later by the Youth Hostels Association; but one wonders what would have happened had it not been for the Kensington Society's dogged fight for the preservation of the East Wing of Holland House, and its co-ordination of the quite con- siderable feeling against the demolition theory.

of December 18, Mr. W. G. Fiske's letter on the tragedy of Holland House is couched in terms of a sweet resigna- tion.

May I ask Mr. Fiske whether, as Chairman of the LCC Town Planning Committee, he is prepared categorically to deny that the East Wing of Holland -House is capable of preservation as a historic monument and as a building which could be put to a useful purpose ? I await Mr. Fiske's reply.

I am not aware that Mr. Fiske ever did reply to that letter. Perhaps he would like to do so now.—Yours faithfully,