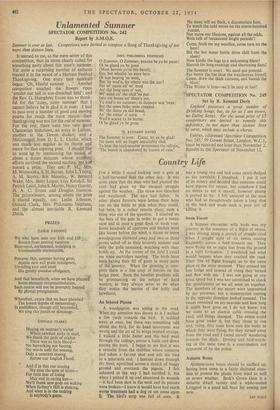 A woodpigeon was sitting in the road. When my attention was drawn to it I walked a few yards towards the bird. It toddled away at once, but there was something odd about the bird, for its head movement was wrong and the set of its wings seemed strange. I walked a little faster and the bird went through the railings, across a bank and down among the trees. I began to see that it was a casualty from the stubbles where someone had taken a far-out shot and left the bird to a miserable end, I hurried down through the trees, squelched across a stretch of boggy, ground and overtook the pigeon. I felt ashamed at the way I had terrified it, but when I picked it up and examined its wounds —it had been shot in the neck and its pinions were broken—I knew it would have had much worse treatment bad a dog or cat come upon ft. The bird's crop was full of corn. It

was a young one and had come newly-fledged to the cornfield, I imagined. I put it out of its misery and decided that someone could have pigeon for supper, but somehow I had no desire to eat it myself, however plump it proved to be. I felt annoyed at the man who had so thoughtlessly taken a long shot at the bird and made such a poor job of killing it.