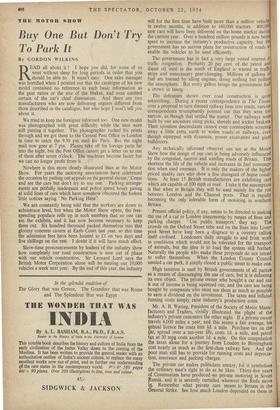 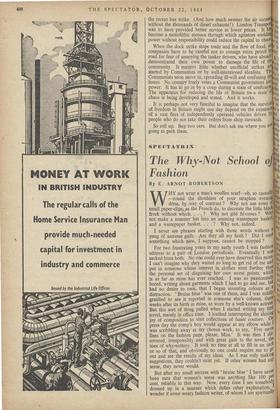 Buy One But Don't Try the current year. Over a

hundred million pounds is now bein To Park It government has no serious plans for construction of roads to By GORDON WILKINS READ all about it 1 I hope you did, for some of us went without sleep for long periods in order that you should be able to. It wasn't easy. One sales manager was horrified when I pointed out that the catalogue of his new model contained no reference to such basic information as the gear ratios or the size of the brakes, and even omitted certain of the car's chief dimensions. And there are two manufacturers who are now delivering engines different from those described in the catalogue, but who hope I won't tell you about it.

We tried to keep the foreigner informed too. One new model was photographed with great difficulty while the men were still putting it together. The photographer rushed his prints through and we got them to the Central Post Office in London in time to catch the 9.30 pm mail for Paris. But the night mail now goes at 7 pm. Planes take off for foreign parts far Into the night, but the Post Office cannot get a letter on to one of them after seven o'clock. The machines become faster but we can no longer profit from it.

Nowhere is this more clearly illustrated than at the Motor Show. For years the motoring associations have celebrated the occasion by putting out appeals on the general theme,' Come and see the cars but don't try to use one.' Parking arrange- ments are pitifully inadequate and police spend hours gazing at solid lines of cars which have somehow obscured the forlorn little notices saying ' No Parking Here.'

We are constantly being told that the workers are down to subsistence level, but when the Motor Show opens, the free- spending populace rolls up in such numbers that no one can see the exhibits, and it has now become necessary to keep them out. Six hundred thousand packed themselves into that gloomy concrete cavern at Earls Court last year, so this time the admission fees have been hoisted to £1 on two days and five shillings on the rest. I doubt if it will have much effect.

Show-time pronouncements by leaders of the industry show how completely our road construction is now out of phase with our vehicle construction. Sir Leonard Lord says the British Motor Corporation alone will be turning out 10,000 vehicles a week next year. By the end of this year, the industry in twelve months, in addition to 160,000 tractors. 400, new cars will have been delivered on they home market dun spent to increase the industry's productive ,capacity, but the enable the vehicles to be used efficiently.

The government has in fact a very large vested interest in traffic congestion. Probably 20 per cent. of the petrol and diesel oil used in the south of England is wasted in trait° stops and unnecessary gear-changing. Millions of gallons of fuel are burned by idling engines, doing nothing but pollute the atmosphere. But every gallon brings the government hag a crown in taxes.

The defeatism shown over road construction is quite astonishing. During a recent correspondence in The Times, over a proposal to turn disused railway lines into roads, various correspondents triumphantly pointed out that they were too narrow, as though that settled the matter. Our railways were built by our ancestors using picks, shovels and wicker baskets. Their spineless descendants cannot even contemplate scraping away a little extra earth to widen roads or railways, even though equipped with dynamite, power excavators and giant bulldozers. .

Any technically informed observer can see at the Motor Show how the design of our cars is being adversely influenced by the congested, narrow and winding roads of Britain. This shortens the life of the vehicle and increases its fuel consump- tion when used overseas. It is only the makers of the higher priced quality cars who show a fine disregard of home condi- tions. At least 15 British manufacturers are exhibiting cars which are capable of 100 mph or over. I take it the assumption is that when in Britain they will be used mainly for the run between London and the Channel ports. That is rapidly becoming the only tolerable form of motoring in southern Britain.

Present official policy, if any, seems to be directed to makingi the use of a car in London uneconomic by means of fines and parking charges. ' Use public transport,' they say. The crowds on the Oxford Street tube and on the lines into Liver- pool Street have long been a disgrace to a country calling itself civilised. Londoners daily struggle to and from work in conditions which would not be tolerated for the transport of animals, but the idea is to load the system still further. Naturally the people who make these proposals do not intend to suffer themselves. When the London County Council needed a car park, it simply closed a public street to make one.

High taxation is used by British governments of all parties as a means of discouraging the use of cars, but it is defeating its own object. The private owner who bought a car and ran it out of income is being squeezed out, and the cars are being bought by companies who must use them as much as possible to earn a dividend on the investment. The taxes and inflated funning costs simply raise industry's production costs.

Mr. A. B. Waring, President of the Society of Motor Manu- facturers and Traders, vividly illustrated the plight of the Industry's private customers the other night. If a private owner travels 6,000 miles a year, and this seems a fair average, his phual licence fee costs him id. a mile. Purchase tax on the Or, spread over a ten-year life, costs ld. a mile, and petrol tax at 30 mpg costs another ld. a mile. On this computation the taxes alone for a journey from' London to Birmingham cost nearly as much as the first-class railway fare. And the poor mafi still has to provide for running costs and deprecia- tion, insurance and parking charges.

The private car makes politicians uneasy, foe it symbolises the ordinary man's right to do as he likes. Thirty-five years Of Communism have produced-no private motoring in Soviet iussia, and it is severely curtailed wherever the Reds move . Remember what private cars meant to Britain in the eneral Strike. See how much London depended on them in the recent bus strike. (And how much sweeter the air seemed without the thousands of diesel exhausts!). London Transpod was to have provided better service at lower prices. It hat become a monolithic menace through which agitators wielding power without responsibility could reduce the capital to chaos, When the dock strike stops trade and the flow of food, Oil companies have to be careful not to consign extra petrol bY road for fear of annoying the tanker drivers, who have already demonstrated their own power to damage the life of tb° community. It matters little whether unofficial strikes are started by Communists or by well-intentioned idealists. The Communists soon move in, spreading ill-will and confusing the issues. No country freely votes a Communist govermhent into power. It has to go in by a coup during a state of confusion; The apparatus for reducing the life of Britain to a state' of chaos is being developed and tested. And it works.

It is perhaps not very fanciful to imagine that the survival of freedom in Britain might one day depend on the existence of a vast fleet of independently operated vehicles driven bY people who do not take their orders from shop stewards.

So roll up. Buy two cars. But don't ask me where you ate going to park them.