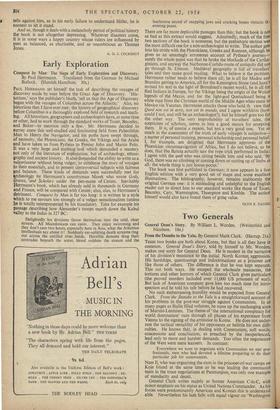 Conquest by Man: The Saga of Early Exploration and Discovery. By Paul Herrmann. Translated from the German by Michael Bullock. (Hamish Hamilton. 30s.) PAUL HERRMANN set himself the task of describing the voyages of discovery made by man before the Great Age of Discovery. 'His- torians,' says the publisher's blurb, 'tell us that the Age of Discovery began with the voyages of Columbus across the Atlantic.' Alas, no historians that I have ever met; the history of geographical discovery before Columbus is a thoroughly explored field of research and teach- ing. All historians, geographers and archaeologists have, at some time or other, had to work through the standard works of Tozer, Beazeley, and Baker—to mention only a few. Mr. Herrmann decided to survey anew this well-studied and fascinating field from Palaeolithic Man to Henry the Navigator, and his paths have swept through, of necessity, the Phoenicians, the Greeks, the Vikings and the Arabs end have taken us from Pytheas to Prester John and Marco Polo. It was a very large and exciting task which demanded a mastery hot only of the literature of exploration, but of archeology, ethno- graphy and ancient histbry. It also demanded the ability to write as a vulgarisateur without being vulgar, to condense the story of voyages to their essentials, and to present controversial subjects with fairness

d balance. These kinds of demands were successfully met for

hagiology by Herrmann's countryman Marek who wrote Gods, raves, °and Scholars under the pen-name of Ceram. Inevitably errmann's book, which has already sold in thousands in Germany and France, will be compared with Ceram; also, alas, to Herrmann's detriment. Conquest by Man is far too long: it is written in a style Which to me savours too strongly of a vulgar sensationalism (unless be is totally misrepresented by his translator). Take for example his passage describing how Alexander's troops march down the Kabul valley to the Indus in 327 BC: Delightedly his divisions throw themselves into the cold, clear stream. All Macedonians can swim. They enjoy swimming and they don't care two hoots, especially here in Asia, what the Athenian intellectuals say about it I Suddenly ear-splitting death screams ring out across the untilled river. lands. Horrible demons drag their comrades beneath the water, blood reddens the stream and the

There are far more deplorable passages than this; but the book is not as bad as this extract would suggest. Admittedly, much of the first two sections of the book is nonsense, but the prehistqric section was the most difficult one for a non-archaeologist to write. The author gets into his stride with the Phoenicians, Greeks and Romans, although he gives us an amazingly erroneous account of Pytheas's journey— surely the whole point was that he broke the blockade of the Cartha- ginians, and anyway the Narbonne-Corbilo route of antiquity did not go through St. Etienne. Mediaeval geography is full of travellers' tales and they make good reading. What to believe is the problem. Herrmann rather tends to believe them all; he is all for Madoc and Brandan getting to America, all for the Kensington Stone (and hasn't revised his text in the light of Brondsted's recent work), he is all for Red Indians in Europe, for the Vikings being the origin of the Wotan legends of the Mayas, and for the light-god Quetzalcoatl being a white man from the Christian world of the Middle Ages wheo came to Mexico via Yucatan. Herrmann attacks those who hold th view that Quod non est in actis, non est in mundo, and I agree withhim (how could I not, and still be an archaeologist?), but he himself goes too far the other way. The very improbability of travellers' tales, the scepticism of scholars, seems to him a good reason for accepting them. It is, of course a reason, but not a very good one. Yet so much in the assessment of the truth of early voyages is subjective— a matter of personal training, personal scholarship and personal belief. I, for example, am delighted that Hemnann approves of the Phoenician circumnavigation of Africa, but I do not believe, as he does, that 1bn Batuta actually saw the rope trick performed in India: I agree with the qadi who was sitting beside him and who said, 'By God, there was no climbing or coming down or cutting up of limbs at all: the whole thing is just hocus-pocus.'

The book was first published in German; it now appears in a fine English edition with a very good set of maps and some excellent illustrations. The bibliography, however, remains stubbornly the original German one: it is misleading and unhelpful to the English reader not to direct him to our standard works like those of Tozer, Beazeley, Cary, Warmington, Thompson and Kimble. The author himself would also have found them of great value.